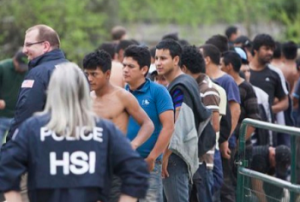 […]  That’s where they love the focus to be.  So when Virginia delegates Hugo and Miller sent a letter to the Governor demanding information about his administration’s involvement with the housing and care of […]

I understand and agree with the point that the public should be made aware of costs. However, if private organizations are willing to take some of these kids, I would think the ultra-conservatives would love it. And the letter comes across as heartless and cold. They are children, not “UAC’s for heavens sake. Call them children.
Also, years ago when I enrolled my kids in Kindergarten, I had to prove US AND VA legal status. That was in Chesterfield.

Thank you for all this investigative reporting, Bull Elephant. I’m happy to see this fed’s and McAuliffe’ s secrecy w/ regards to feds-dumping-illegals-in-VA being brought to light of day. WatchDog.org Virginia Bureau is also reporting on this ware-housing of illegals in VA. And looks like Corey Stewart has picked up the ball and is fighting back hard against the illegals who were dumped in Prince William County.

Based on info you guys are providing I’m hounding my elected officials to take action against letting these illegals be housed here, and for them to keep us – their constituents informed. I’m also helping spread your word through social media.

Once again – THANKS and please keep on!

7/10/2014. joint press conference was held by Mexican President Enrique Peña Nieto and Guatemalan president Otto Perez Molina to announce their agreement to jointly cooperate in and facilitate the invasion of their northern neighbor, the United States.

Yes, and on 07/11/2104, Steven Harper and Quog, the Emperor of Mars, announced an Entente to invade Maine and Oklahoma.

Didn’t somebody important say that?

No one is forbidding children from coming to Christ.

The US cannot accept every poor child in the world and their parents. If we do that, we all starve together. We have to seal the borders and stop this insanity, for the poor in America who need jobs. The more immigrants, the lower salaries will go for Americans. It’s rather simple supply and demand.

Somebody important did indeed say that, and he was executed by the government.

When I was in the Peace Corps, a woman missionary posted near me lost her mind because she tried to minister to every single person who came to her house. She had to be medivaced out of country. She ended up helping nobody. There’s the metaphor for Jeanine’s answer to your comment.

Yeah they did ! so which of these disease ridden little Children from Obama’s Trail of Tears 2014 do you plan on brining into your home among your family. I just love people who quote the Bible because they think that will impress people .

Typical lib non-answer and deflection. Answer Sandy Jenkins’ question, JWS, “how many of these illegals are you taking into YOUR home?” Hypocrite. Oh, I’m sure you quote the Pope’s statements on abortion too, don’t you.

Do you guys even listen to yourselves? They’re kids, for crying out loud. It’s not their fault they weren’t born here and haven’t had the benefit that we and others have had. At the very least, they deserve some kind of sympathy.

Didn’t somebody important say that? Are you referring to Jesus as “somebody important”? Jesus is the Lover of all. How can a LOVING parent risk a child’s safety through these latest means of illegal immigration? This is INSANITY!