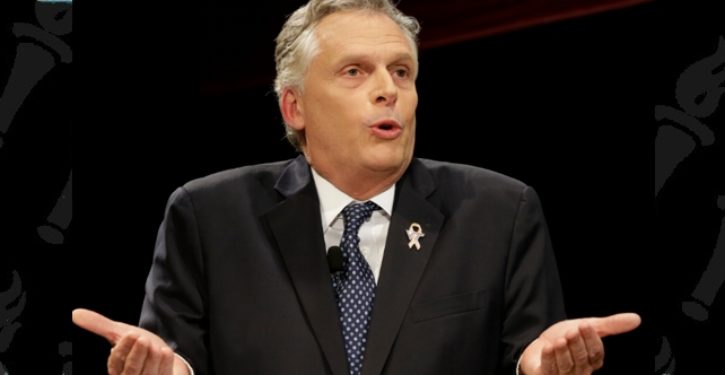 The London Daily Mail reports that “Democratic governor candidate Terry McAuliffe abruptly” cancelled a “rally on the eve of” Virginia’s November 2 election, “after he said state had too many white teachers and Glenn Youngkin took a 1% lead in race that could deal a huge blow to Biden. Republican contender Youngkin’s average polling on Friday showed him at 47.6% – just .6% ahead of Democrat McAuliffe’s 47%. The down-to-the-wire election has come down to a a few issues,” such as “parental control of education” and “critical race theory. Youngkin and McAuliffe are scheduled for full days of campaigning criss-crossing the Old Dominion State on Monday. Democrats are trying to link Youngkin to Trump in hopes it will hurt him…Donald Trump reiterated his support for Youngkin in a statement ahead of his tele-rally for the candidate to take place Monday evening. He urged supporters to get out and vote.”

“Terry McAuliffe canceled a Virginia Beach campaign event on Monday, less than 24 hours before the gubernatorial Election Day, with polls showing his GOP challenger Glenn Youngkin edging ahead in a race that could be catastrophic for the Biden White House.”

McAuliffe has made false claims about the spread of left-wing “critical race theory” in Virginia’s schools. A critical race theory book is being used in Arlington County’s Wakefield High School. It promotes crackpot conspiracy theories, gets historical facts wrong, and praises a Marxist antisemite. Its author argues that it is good to discriminate against white people.

In 2015, when McAuliffe was last governor, his Department of Education advised public schools to “embrace critical race theory” in order to ‘re-engineer attitudes and belief systems.'” Critical race theory is playing a growing role in school systems in northern Virginia, such as in Fairfax, Arlington, and Loudoun Counties.

As the Washington Examiner and NPR note, McAuliffe has proposed billions of dollars in new spending. A think-tank says the result “would be the largest tax increase in the state’s history.” The Thomas Jefferson Institute “analyzed McAuliffe’s plans” and “concluded Virginia’s operating budget spending would increase by more than $8.3 billion, its general fund would increase by more than $7.6 billion.” That means big tax increases, because Virginia law requires a balanced budget.

The National Legal and Policy Center has asked the Federal Election Commission to investigate McAuliffe over a $350,000 campaign donation that it says was illegal because it was received from a foreign firm. Federal law prohibits political campaigns from accepting money from foreign nationals and firms, directly or indirectly, in either state or federal elections.

The CRT that came in starting around 2015 to Virginia came through the administrative class of academia – principals, superintendents, instructional leaders, state board of education. They attend conferences and develop a mutual admiration society where they think they, not parents, are the determining influences in developing young people. The same with school boards and where they get their thought leadership through the VSBA and NSBA. They used Trump’s bumbling words as a fulcrum to leverage this onto us because of their pride and misplaced guilt. I suspect a lot of the educators and instructional support people in this Commonwealth are going to vote for Youngkin just to get sanity back. They won’t be vocal, but McAuliffe saying our teaching population is too white to make kids feel comfortable is a big slap in the face. You won’t see parents of Korean descent supporting this line of equal outcomes in NOVA and I suspect other ethnic groups that normally would vote more D are going to go with the R.

Many localities rejected it and it morphed into less racially charged “equity” programs in other areas. But the equity lens through which the past two governor administrations is looking is race and sexual identification. What used to be called good teaching and getting to know your students has turned into a lamentation on race and privileges. This election is a rejection of that intersectionality.

Let’s give Youngkin credit for brilliance. He took every bumble by that idiot MacCauliffe and reamed him. He got lucky of course. Terry the dumbass absolutely fell into every trap possible. But it’s understandable. The advantage he had seemed to suggest that every stupid cultural war issue the Democrats have seemingly won was a winning ticket. For example… Parents have no business telling schools what to teach. Resonates with his pure base and he thought that all 9 percent advantage he has was on board with that.
If Terry McRat stuffs the ballot box enough and Youngkin loses… watch your ass you rats Kaine and Warner… that boy is smart and a formidable opponent for you secure Senate seats.

“If Terry McRat stuffs the ballot box enough and Youngkin loses… watch your ass you rats Kaine and Warner… that boy is smart and a formidable opponent for you secure Senate seats” He will try, count on it. However if he succeeds then Kaine and Warner need not worry, the vote fraud machinery will protect them. Tomorrow at this time we will know if we have regained our freedoms or are in the final approach to communist hell

Hey, Terry. Where should the white teachers go if there are too many of them. I suggest they teach where they are appreciated and not in the public schools. Maybe they can leave the state or, better yet, the democrat socialist party.

I have read reports that some teachers are cooperating with parent groups to do home schooling for 5 or 10 kids at a time for $50 to $100 per child per week or month. Can’t remember the exact details. Either way they make a hell of a lot more money that way and don’t have to worry about perverts in an administration pushing the queer agenda.

I wonder how the “equity” obsession of the Cultural Marxist, i.e. today’s Democrats are resonating with the Asians in Nova… I’m sure they are on board with changing merit based admission to the indoctrination centers… I bet they love the new lottery for TJ…
For those of you who are not familiar with Fairfax… Koreans will study for years for that TJ exam. Now they get to apply and have some woke administrator determine their admission… versus the merit based test plus grades.
Plus whatever you call what’s is being pushed by the VA Dept of Education… ITS NOT CRT!!! ITS NOT CRT!!! Yeah right.. Add to all the sex obsession… Culturally Not what the Asians want there Democrats.
Wow… amigos Johnny and Eric… you managed to blow an overwhelming electoral advantage. Now… I am not sure the Clinton Rat won’t win… but this election should have been over at 9AM..

It is my children’s education.
If you believe this and you know that we can do much better,