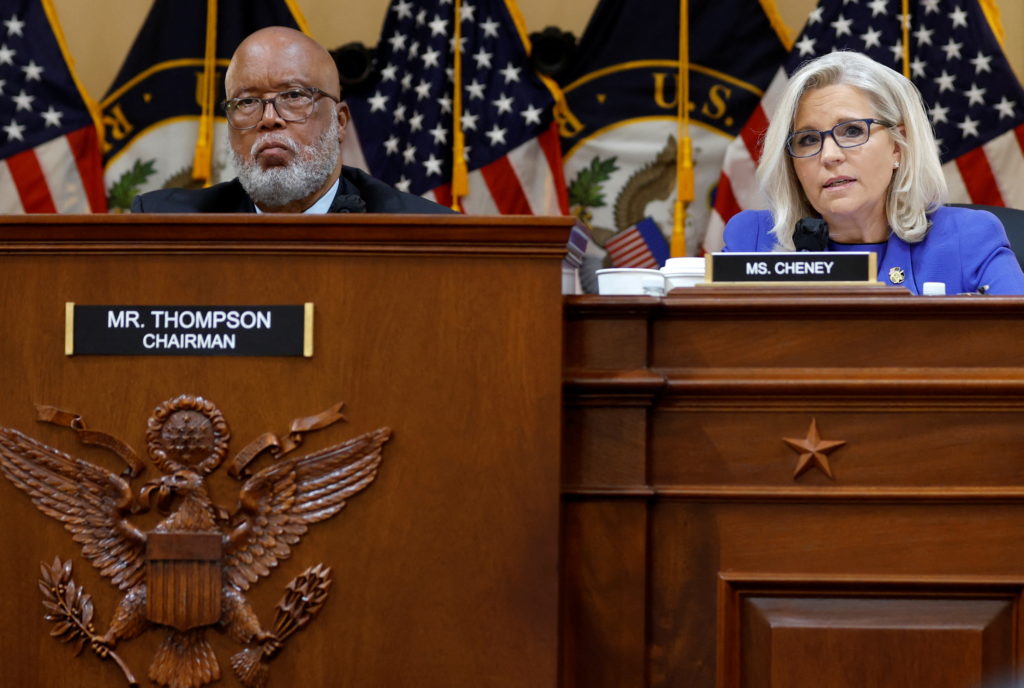 Democrats’ 1/6 hearings are the true ‘assault on democracy’

The courts will handle Trump and the rioters – voters need to focus on what matters to their daily lives, which Democrats are ruining

Yes, democracy is under assault – but it’s not due to Donald Trump’s effort to stay in power and overturn the Electoral College in the 2020 electi0n, because we did have a peaceful transition of power to Joe Biden and Trump is out.

But with their sham 1/6 hearings, the Democrats are taking a page out of the totalitarian show trials of the 30s to use the Capitol assault on Jan. 6, 2021, to attempt to turn the national attention away from their disastrous policies.

I actually watched the so-called hearing Thursday by the special House committee, which was more like a staged documentary including TV-news style interviews with perpetrators and good guys.  Part II of this mockery is Monday night.

It was great theater and if you’re a liberal who reacts to emotion, it was  “gripping”

But in reality, Democrats know they are goners Nov. 8 in the House and stand to lose the U.S. Senate, too.  They want desperately to ”Keep Trump Alive” in the minds of the voters and want to tie ALL Republicans to Trump and 1/6 denial — even Day One Trumpsters like me who wanted him to concede the election when the Electoral College voted on Dec. 13, 2020.

So, here are some facts to consider before drawing conclusions:

However, what criminal charges could Trump & Co. face?  The legal “Brandenburg” standard for inciting a riot, from a 1969 Supreme Court decision, is not what you say in social media or fundraising mailers or the media, but verbal speech “directed to inciting or producing imminent lawless action” at a rally or gathering, and Trump and other speakers made no inciting remarks at the Stop the Steal rally that preceded the assault.

I suppose Trump & Co. could be charged with conspiracy to commit sedition, but it will be the courts, not Congress and the media, which determine their fate and under the Constitution, they have a right to a fair trial.

Another aim of this probe could be to gather evidence for DoJ to seek indictments for inciting a riot and test the Brandenburg standard in court.  Any new laws Congress passes in this regard would not apply retroactively to 1/6.

In addition, the investigation’s evidence could be used by DoJ to indict or besmirch the reputations of many House and Senate Republicans, whom the Democrats believe were in cahoots with the rioters, perhaps in the hopes of turning their districts “Blue” this fall.    These include, according to “Politico,”  Marjorie Taylor Greene (R-Ga.), Mo Brooks (R-Ala.), Lauren Boebert (R-Colo.), Paul Gosar (R-Ariz.), and Andy Biggs (R-Ariz.).

Wyoming Rep. Liz Cheney Thursday, one of two Republican dupes on the panel (Adam Kinzinger being the other), accused a fellow Republican, Scott Perry of Pennsylvania, of seeking a pardon from Trump, which Perry denied

The chair of the committee, Rep. Bennie Thompson of Mississippi, said in his opening remarks that “democracy was under assault” on Jan. 6, 2021.  Cheney said Republican colleagues “are defending the indefensible: There will come a day when Donald Trump is gone, but your dishonor will remain.

But in reality, the courts are taking care of the rioters and will take care of Trump, Guiliani , et. al.

Congress’ prime time Spanish inquisition exaggerates 1/6 and is not about getting facts, but political gain and if unchecked could denigrate our democracy and the rule of law.

It seeks to criminalize conservative activism, so it’s  Pelosi’s puppets, Cheney and Kinzinger, who will be dishonored.  Hopefully, if we still have free and fair elections in this nation, voters will oust the liberal insurrectionists Nov. 8.

Looks like it is all for naught Democrat Comment Soy Bros… No criminal referrals… Got Lizzy all pissed off. The public will be forgetting about this silly crap by Monday except for you true believers… They will have rising gas prices to focus on.

There seems to be a new wave of Democrat True Believers here for this article…
Hey Fellas ENJOY the Corrupt Clown Posse Show!!!! It’s the great show in America… Meanwhile you bunch of nitwits… Especially you Simple Johnny Martin and Erica, the Cross Dressing Drag Queen…
The stock market lost 1.3 TRILLION DOLLARS Yesterday… AND GAS is heading way north of 5 bucks.. To take prices even higher..
But you damn idiots focus on Trump… That’s the important thing.

Consider that the US is in crisis. It is now reaping the disaster of its scummy corporations and politicos idea to outsource its industry. And create a government and society based upon debt and fiat currency games. This inflation you are experiencing is not transitory… and it is fueled by a whirlwind of disasters coming together.
So instead of addressing that you have this F..k ing clown show. These morons are looking down the barrel of a disaster and they produce this complete nonsense.
These idiot turdbirds need to be addressing onshoring industries and dumping the green horsesht… to pump oil here. Instead they are sticking their thumbs up their arses and instead producing this circus….
The Democrats are justifiably going to get their asses kicked in the fall.. but will the GOP INC grasp the serious nature of what this sinking country is facing or will they just grift along like usual.

Now we know: Rudy Giuliani come to the White House shit-faced, knee-walking drunk on Election Night 2020 and told Trump the election was rigged. It went downhill from there — a drunk, disbarred lawyer advising a dumbass crook — what could possible go wrong?

Funny comment. Is this your real name because Peter Navarro was a white house trade adviser who was recently brought in leg irons to be arraigned for not testifying before Congress

The Bribem administration is a village of jackasses, led by a corrupt and demented clown.

“we did have a peaceful transition of power to Joe Biden and Trump is out. ”

“police chose to open those doors rather than defend them”

” could be used by DoJ to indict or besmirch the reputations of many House and Senate Republicans, whom the Democrats believe were in cahoots with the rioters, perhaps in the hopes of turning their districts “Blue” this fall. These include, according to “Politico,” Marjorie Taylor Greene (R-Ga.), Mo Brooks (R-Ala.), Lauren Boebert (R-Colo.), Paul Gosar (R-Ariz.), and Andy Biggs (R-Ariz.). ”

Those anti-American assholes should all be in jail

Congress’ prime time Spanish inquisition exaggerates 1/6 and is not about getting facts, but political gain and if unchecked could denigrate our democracy and the rule of law.”

Such insightful comments! i supposed you’d like to suspend the rule of law and put any Republican in jail, right? Or, a hold show trials for Trump and his followers like the Nazis did with Von Stauffenberg after he was caught trying to blow up Hitler in the bunker> Interesting how Leftists and Rightist extremists think alike

and yes, Trump belongs in jail……..

Mr, Reid, the world you knew has shifted underneath your feet without your awareness or assent.

Everybody!! We do NOT live in a Democracy! The USA is a REPUBLIC so don’t let Democrat jive talk make us think that since this is a democracy, who better to be in charge than Democrats? Word Games for Dummies. “I pledge allegiance to the flag of the United States of America, and to the REPUBLIC for which it stands….”

The Republican Party was founded to eliminate that evil social condition of which Democrats were most proud, slavery. Today we would call it ‘human trafficking” and hundreds of thousands of white people died to free black slaves. Democrats ruin everything they touch, including our language. Jan 6 hearings are just one more attempt at destroying whatever sense of nationhood remains in our formerly great country.

“Trump, Rudy Giuliani and other cohorts who raised millions of dollars on the “Stop The Steal” effort did, in my view, stoke this riot and should be held accountable.”

Good for you, Ken. It looks to me like these hearings are meant to drive that point home. Please note that Trump is still the head of the GOP… so what does that say about your party… especially Conservatives…?

“The only other folks facing such charges was a cadre of 10 extremists, including one from Berryville, VA…”

Folks are witnessing the Biden/Harris Administration and Democrats not have one once of concern for the ever constant escalation of every goods and fuel that takes them to their jobs.
I imagine that some who voted for Biden are having diminishing support for Democrats and their Congressional Circus.
It is awful that the Biden/Harris Administration and Democrats are lacking genuine concerns for the American people.

The great reset of the WEF isn’t about humanity but people as parts of a giant global machine.

Ol Lizzy there is auditioning for her next job as a DAVOS lobbyist isn’t she? Like Eric Cantor… who went off to make 12 million bucks lobbying for various globalist interests. Deep down most every GOP Congress scum dreams of the dollars they will swim in… or do swim in while member of the District of Corruption club… Globalist sure hate Trump. They use their puppets every way they can. You may not like Trump… but not as much as his globalists enemies. Who have their little puppets to attack.. it is so sickeningly stupid these show trials put on by the likes of Piglosi. Russian collusion… Asking what Hunter Bribem was doing in the Ukraine on a phone call (answer… making money rain on the family business) now this horsecrap.
The worst of this crap is what they did to many of the poor people that the FBI encouraged to trespass… why isn’t that what’s his name Ray Epps in jail??? He’s on tape. But nooo… NOT AN FBI ASSET!!! And Bullsh.t to that. So the defenders of THEIR DEMOCRACY!!! you know the ones where Congress critters make millions of dollars like Piglosi… have jailed these poor people and had the DOJ conduct lawfare on them.. That’s where they prolong their trials.. throw them in dank jails. I fault the GOP for sitting by there. I guess Lindsay Graham likes to see them there. Those poor people thought that they lived in a “democracy”. I don’t know a democracy that suspends habeas do you?
So I guess in conclusion… to the Demorats and their GOP SCUM supporters… stick your democracy up your arse…

Gosh, you’re great at euphemisms — never saw “Piglosi” and “Hunter Bribem.” And you’re right about all these Republicans who want to be high paid lobbyists and influence peddlers, but my guess is “Ol Lizzy” will join the Lincoln project and become a CNN or MSDNC talking head (“analyist”) when she loses her primary in august or her seat in November. Her public accusation of that fellow Republican seeking a pardon was below the belt. Thanks for your comments — and the funny euphemisms . I may use them some time!

This is the Dreyfus trial. The Dreyfusards supported Dreyfus – and I support Dreyfus, aka, Trump

Yes, it is ironic that history has repeated itself.

Disagree with multiple issues here but not all.