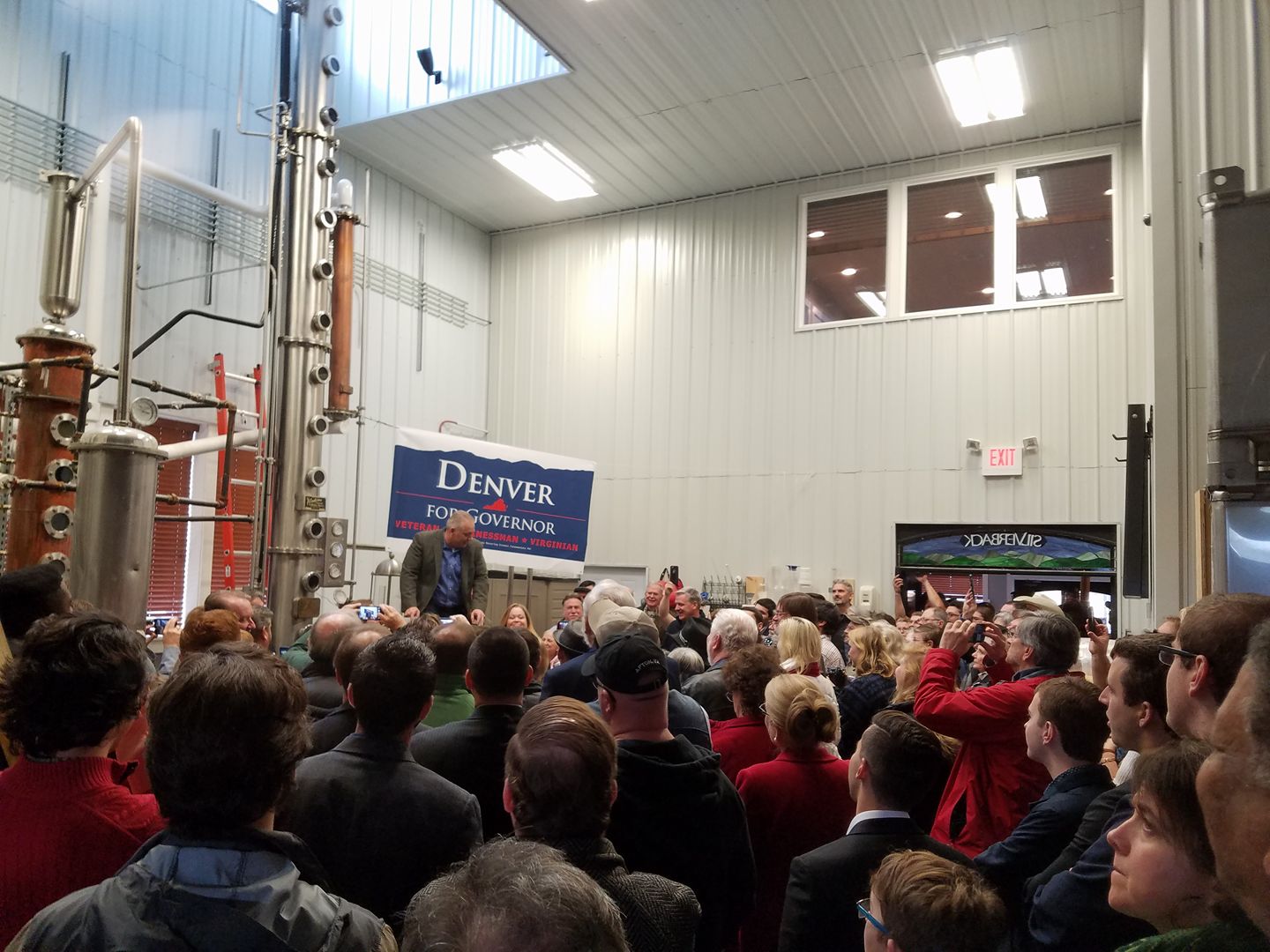 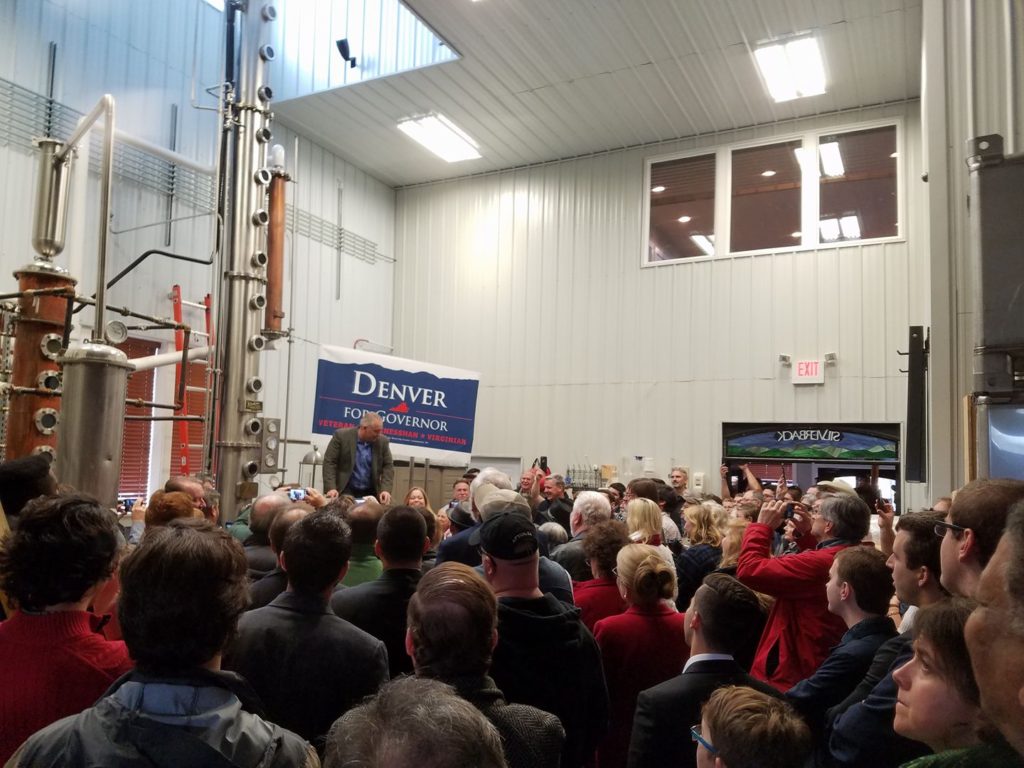 In the picture above you can’t see all the people behind me, but they were as packed together as the folks in front. There were dozens of people still in the bar-area, out the door to the right. Everyone crammed together, excited to hear what Denver had in store. There was no “speech”, per se. Denver simply spoke to the crowd about his story, his experience, and his reason for wanting to make sure average Virginians had a voice in Richmond. I expected a big crowd, but what I saw exceeded my expectations. I expected people to be excited, but their excitement exceeded my expectations.

If you would like to see Denver’s conversation with his supporters you can find it here. I fully expect this race to come down to Ed Gillespie and Denver Riggleman; both are affable, intelligent, experienced, and ready to help lead Virginia to a brighter future. Republican activists, politicos, bloggers, and people interested in the primary usually have to think about which candidate they are going to support and why. Sometimes we look for the candidate that “can win” or raise the most money. Other times we look for the candidate that speaks to that one important issue: like illegal immigration, the sanctity of life, or lower taxes.

For the first time since moving to Virginia, I have the opportunity to vote in a Republican Primary for a candidate who represents me. Wagner, Stewart, and Gillespie are all good men and they are all Republicans. I’m sure the vast majority of us agree on 70-80% of all the issues and probably 90% on the really important issues. But choosing a candidate isn’t merely about seeing which boxes a politician checks on a survey. Of course all our candidates are pro-life and of course all of our candidates want lower taxes. So what really makes them different from each other?

I’m sure many of you have taken those online tests that place you somewhere on the political spectrum. You answer twenty to a hundred statements with which you can agree strongly agree, agree, neutral, disagree, or strongly disagree. If that was all there was, Republicans would consistently be in agreement with other Republicans. However, the best online tests also ask a second question: How important is this issue to you? Extremely, Very, Moderately, Not Very, or Not At All.

Denver is the candidate that not only shares my Republican values, but also shares my priorities. As a businessman, he understands the real economic impact of taxes, regulations, fees, and even the cost of instability or uncertainty in our laws. He understands the importance of private property and our rights to live on our own land without the government regulating everything from puddles to the width of our doorway on a screened-in porch.

As Governor, Ed Gillespie, Denver Riggleman, Corey Stewart, or Frank Wagner will not be able to “create jobs” or lower taxes. That is the job of the legislature. The Governor can sign those bills – and I’m certain none of them would veto popular, conservative bills on tax reform or reductions in barriers to job creation in the energy sector.

The Governor is an executive position. They can direct departments in the Commonwealth toward goals which benefit the people and businesses suffering under the aggressive exercise of oppressive regulation. We need a CEO, not a politician, as Governor. Denver and Gillespie aren’t politicians, but Denver is not and has never been subject or accountable to special interests or upper-level party politics. Denver Riggleman has not been corrupted by our political system, by the money, or by those unknown men and women who use their wealth to promote, elect, and control our elected officials.

Denver’s life-story is packed with experiences that folks caught up in the trappings of Washington D.C. and national politics could never know – will never know. His life-story reflects the stories of so many of us who have worked our fingers to the bone in pursuit of the American Dream and found that government, not competition, was the greatest obstacle to overcome.

Who do we want in charge of the executive branch of our State Government? Do we want someone who will surround themselves with the same consultants, advisers, fundraisers, and party officials that have been holding positions in the upper-echelon of the party for the last thirty years? Or do we want to hire/elect someone who actually knows how to create jobs, encourage growth, and who can tell the difference between regulations that protect us from regulations which simply redistribute our wealth into the pockets of bureaucrats and special interests?

If you care about our economy and believe that our antiquated tax system, our burdensome regulatory system, and our corrupt bureaucracy need to be reformed, then Denver Riggleman is your candidate. So much of what a Governor does is determined by the bills that land on his desk, but imagine what one of us could do to clean up this executive branch if only we had the chance. Americans sent President-Elect Donald Trump to Washington to “drain the swamp”. Let’s send Denver Riggleman to Richmond to bring reason, efficiency, and efficacy back to the Commonwealth.

[…] several other bloggers were in attendance including Stacie Gordon of Millennial Ascent and Steven Brodie Tucker of The Bull Elephant. Several leaders of JMU’s Madison Liberty group were there […]

This has got to be good for business too!

Great article Mr. Tucker.
I concur with some of the previous posters.
Let’s Drain the Swamp of “all” the Party hacks.

Ok, all the corrupt ones!

ALL of the corrupt party hacks?

There are going to be a ton of empty seats at that nominating convention.

Nothing against Mr. Riggleman, but the imagery makes me think of what I read about “Log Cabin and Hard Cider,” circa 1840. 😉

Why would that be an insult? Harrison won…

Some people take offense easily. Glad you take it in stride.

Interesting to hear that Carlyle Gregory is Riggleman’s handler.

Maybe the GOP of Lin Holton is coming back.

So far, I am liking what I’m seeing. His kickoff speech was refreshing and I am looking forward to hearing more from Denver.

The Denver Riggleman candidacy that officially began today evokes memories of the unlikely journeys of Dave Brat and Donald Trump. Like them, he sees a swamp that needs draining. Like them he appears to be a long shot. Mr. Riggleman is determined to eliminate the disproportionate influence of big money interests and their dutiful lobbyists, who pretty much have their way in the General Assembly Building. Denver Riggleman is a persuasive and committed candidate, who will find an attentive audience among Virginians. The vibe in the distillery today was electric. The Whiskey rebellion has begun.

And of Cuccinelli, EW Jackson, and Ed ‘No Cigar’ Gillespie.

The products of conventions…

No, the products of large scale mass meetings pretending to be conventions.

The party is so broken that we cannot stage a party selection process that is representative of the party.

Secret ballots and festival seating. ‘Everybody gets a vote’ apportionment. Zero ‘Republican’ process for conventions at all levels.

We’re so open, our brains have leaked out and we recruit TP and Libertarians to help us nominate. At least when democrats help us select our RINO’s, we sometimes win.