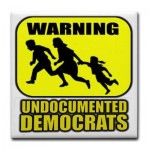 The Political Motives Behind the Obama Administration’s Photo ID Lawsuits

Earlier today, Attorney General Eric Holder announced the Obama administration is suing the State of Texas over its redistricting plan, and to block its new photo ID voting requirement. Far from a non-partisan protection of voting rights, this suit is instead part of a concerted strategy to weaken the GOP’s hold there, and to eventually turn Texas blue.

According to Holder, the photo ID law “was adopted with the purpose, and will have the result, of denying or abridging the right to vote on account of race, color, or membership in a language minority group.”

Will it, though? The Texas measure, referred to as SB 14, simply requires one of many forms of government-issued photo ID, including identification cards that are provided for free to any Texas citizen who needs one to vote. Texas has a compelling state interest in ensuring the intent of current election law, namely that the person who shows up at the polls to vote is who he or she claims to be, and is eligible to cast a vote. This is particularly so given that Texas is among the states with the highest numbers of illegal immigrants.

But Holder, and Obama himself, appear to think that any ID requirement designed to keep non-citizens from voting (or to keep citizens from voting more than once) automatically means that minorities are disadvantaged because they’re not capable of making a trip to the DMV to pick up a free photo ID. If they are to be believed, how very, very racist of them.

But we know that’s not what they believe. They know, just like Republicans, that poor and minority populations are just as capable of getting a photo ID as anyone else. They trot out fake victims of photo ID laws to try to give some measure of cover for their disingenuous arguments, but we know better.

The real underlying motive, as with most everything the Obama administration does, is about enhancing the left’s political power. In this particular case, it is about Battleground Texas, an effort by the Obama machine to undermine the GOP stronghold of Texas by registering as many new voters as possible.

Forget the Alamo—there’s a new battle afoot in Texas and it will determine the state’s political future, and our nation’s. President Obama’s highly effective campaign team has reapportioned resources from Ohio and Florida, and declared war on this Republican stronghold. A growing demographic divide puts the state in play. The scheme’s been dubbed “Battleground Texas” and the plan is simple: turn Texas purple, then blue, by spending big bucks on a growing demographic divide.

The richest vein of unregistered voters who are most sympathetic to Democrats is, of course, those who are not eligible to vote, including those in the country illegally. The Texas photo ID requirement, like similar laws in other states, stands astride the Democrats’ plans, hence the deployment of the full weight of the federal machinery to stop it.

Folks, if this works, forget about debates on immigration amnesty…stripping states of the ability to ensure the integrity of their elections accomplishes the same thing for the Democrats by thwarting the legitimate aims of democratically elected legislatures across the country.

A lot rides on this case.