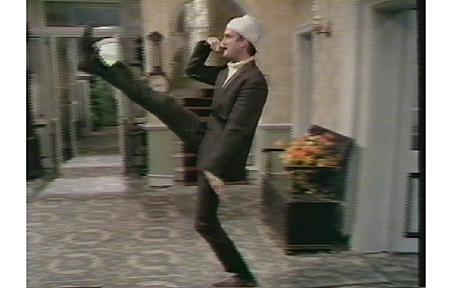 Fans of British comedy have howled for decades over a famous episode of “Fawlty Towers,” starring the incomparable John Cleese, in which some German tourists visit his madcap hotel. The entire staff is under strict orders from Basil (Cleese’s character) not to mention “the late unpleasantness” to their Teutonic guests, under any circumstances. (“Whatever you do, don’t mention the war!”) In typical fashion, though, Basil manages to refer to it in nearly every sentence of his conversation with them. To cheer up the offended Germans after his series of verbal gaffes, the 6’5” Cleese does a hysterical burlesque impression of a goose-stepping Adolph Hitler. Several insane vignettes involving a fire alarm, a kitchen fire, and a talking moose-head cause the Germans to shake their heads and ask, “However did they win?”

I thought of this wonderful production as I sifted through my notes on several past incidents that involved mentioning “the war.” One of these featured Connecticut Attorney General Richard Blumenthal, during his initial run for the U. S. Senate as a Democrat from Connecticut. Previously, Mr. Blumenthal had often mentioned his service in Vietnam: e.g., “…we have learned something very important since the days when I served in Vietnam…” etc.; and similar statements which unmistakably implied that he served overseas. (At least he never mentioned enduring shelling or banzai attacks by the Cong.)

These statements became an issue célèbre after the disclosure that Mr. Blumenthal was never actually in Vietnam, but had received five deferments before enlisting in the Marine Corps Reserve near the end of hostilities. His tales of enduring hostile reactions when he returned were obviously fashioned out of whole cloth. Columnist R. Emmett Tyrrell suggested that the national media’s inattention had encouraged Mr. Blumenthal to continue his war-service charade by giving him the impression that no one had noticed his lies. Thus, the disclosures surprised him and took him off guard.

Vietnam service has tripped up others in the past, of course – none more famously than John Kerry in his 2004 presidential campaign. Mr. Kerry blundered by making his Vietnam War service the lynch-pin of his campaign. At the start of his nomination acceptance speech, he dramatically saluted and declared that he was “reporting for duty.” We can only speculate whether he and his advisors believed this gesture would offset Mr. Bush’s wartime commander-in-chief image.

El Kapitan’s salute evoked wild convention cheering, but he must have forgotten his 1971 testimony to Congress, following his Swiftboat service in Nam. Or maybe he thought the American people had forgotten how he accused his comrades of raping and murdering civilians, and generally acting like barbarians. Whatever the case might have been, Mr. Kerry’s ostentatious salute on national TV brought it all back. 100,000 veterans jumped up, shook their fists at the TV, and swore that this slanderous traitor would never be president. (“Whatever you do, don’t mention The War!”)

To balance the war-service ledger, some Kerry-sympathizers tried to claim that George Bush had dodged a medical exam for military service in 1975. But the charge was based on fraudulent documents which were quickly sniffed out by internet bloggers. The resulting fiasco cost TV journalist Dan Rather his job.

Democrats were outraged over the “unfair” charges brought against Mr. Kerry’s war-service by Swiftboat Veterans for Truth, but he really brought most of it on himself. I believe he could have dispatched the war-thing (as Basil might have called it) quite gracefully, had he not had the hubris to think that the American people could be placated with a quasi-military burlesque act. For instance, he could have stood up and – instead of doing the salute-shtick – said something like this to the American people:

‘I want to make a sincere apology to all of my comrades from the war for things I said in 1971. I did know of some incidents of violence in Vietnam, but my testimony to Congress was exaggerated. We were all young and idealistic then, and we wanted the war to end. I got carried away with myself, said some stupid things, and slandered my comrades-in-arms. For that I am deeply sorry. I regretted my statements as soon as I made them, and I should have apologized then. I’m late, but I’m doing it now. I hope that you can forgive me and that we can put that difficult time behind us. We are all Americans. Let’s move ahead and build a better country. May God bless every man and woman who served with honor in that conflict.’

An earnest statement like that might have put the war – and Mr. Kerry’s part in it – to rest, and reassured the country of his patriotism and good intentions. We all make mistakes. But that kind of humility was beyond John Kerry, just as it seemed to be beyond Richard Blumenthal. The latter’s attempts at “damage control” included vapid claims that he “misspoke” about his military service – namely, that he should have said he served “during” Vietnam, not “in” Vietnam. But it wouldn’t wash. His tales of being spit upon when he came home were too detailed to be corrected by mere word-smithing. Nothing short of a clean breast would suffice. Americans have often shown that they hate liars – especially in high office. Despite his war-exaggerations, Mr. Blumenthal won his Senate seat in liberal Connecticut. But he’ll always have an asterisk by his name that discounts any critiques he might make about military service.

War has been an American political shillelagh since the Civil War. For the rest of the 19th century and into the 20th, northern politicians – many of them veterans – bashed the South and its politicians for trying to dissolve the union and causing such terrible loss of life. In any argument that pitted southern against northern interests, northern politicians predictably mentioned “The War” – a tactic that came to be called “waving the bloody shirt.”

William McKinley – the last president who had fought in the Civil War – died in 1901, but other vets held office well into the 20th century. The last veteran who served in Congress was Charles Manley Stedman (D-NC), who died in 1930 at age 89. Justice Oliver Wendell Holmes – a four-times wounded union veteran – served on the Supreme Court until 1932. He died in 1935 at 94. The last union veteran, Albert Woolsen, died in 1956 at the age of 109.

The War was not only frequently mentioned, but in some respects seemed to continue long after the shooting stopped. Southern author William Faulkner wrote, “In the South the past isn’t being relived; the past isn’t even past.” And Justice Holmes wrote: “In our youth, our hearts were touched with fire.”

While some contemporary public figures disregard the caution against mentioning “the war” at their peril, others avoid mentioning it at all – or at least they avoid identifying the enemy. This fetish reached absurd levels among White House officials during Mr. Obama’s presidency. In his testimony before the House Judiciary Committee, Attorney General Eric Holder performed verbal contortions to avoid naming Islamic terrorists as possible culprits in a Times Square bombing attempt. He kept saying “activists” have “various motivations” – as though they might be angry PTA or Elks Lodge members. Along the way, Mr. Holder alluded to the “teachings of Islam” and praised that religion’s commitment to “peace.” (Who knew that Mr. Holder was such a Koranic scholar?)1

It’s worth noting that another Koranic scholar, George W. Bush, eventually abandoned his insistence that Islam is a “religion of peace.” The jihadists simply would not leave the pax-label in place, and he had to give up on that crack-brained idea. I have often wondered if he believed it, himself.

Don’t mention The War? Neither Mr. Holder nor Mr. Obama wanted to name the enemy. (Could the real jihadis actually be Methodists, Shakers or Southern Baptists?) At least the madcap bunch at Fawlty Towers knew that the Germans had been the enemy, even if their war was long over.

Recently, Democrats raised an almighty stink after President Trump ordered a drone-strike on the Baghdad International airport which killed Iranian Major General Qasem Soleimani of the Islamic Revolutionary Guard Corps. Media organs and political opponents of the president pounded the story for days, covered themselves with sack-cloth and ashes, and wailed that the general was a “beloved hero” to the Iranian people – although he was a known planner of numerous terrorist acts against the USA and our troops, and had the blood of thousands of victims on his hands.

One imagines that if we were fighting Hitler and the Nazis today, Democrats would be denouncing Mr. Trump as a warmonger and decrying our mistreatment of the peace-loving Germans. Recently I read a news item that reported a female college student’s angry comment about World War II:

“It’s no wonder the Japanese bombed Pearl Harbor, after we dropped the atomic bomb on them…”

We live in strange times, and there’s no sign that things are improving.