The famous Johns Hopkins pediatric neurologist who grew up in poverty, Ben Carson, was targeted by the IRS for audit shortly after he spoke out against the Obama administration at a prayer breakfast.  The IRS first did an investigation of Dr. Carson’s real estate holdings and then a full audit of his finances.  They found no wrongdoing by the doctor.

“I guess it could be a coincidence, but I never had been audited before and never really had any encounters with the IRS,” Dr. Carson said in an interview Thursday with The Washington Times. “But it certainly would make one suspicious because we know now the IRS has been used for political purposes and therefore actions like this come under suspicion.”

More on the story here.   Picture from that prayer breakfast: 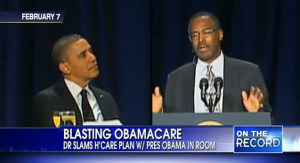