The Electoral College is voting and while the voting is not complete Trump only lacks two votes to reach the need 270 votes.  Texas is the only Republican state not yet counted and we all know how they will vote.  As of 4:55 the electoral count looks like this: 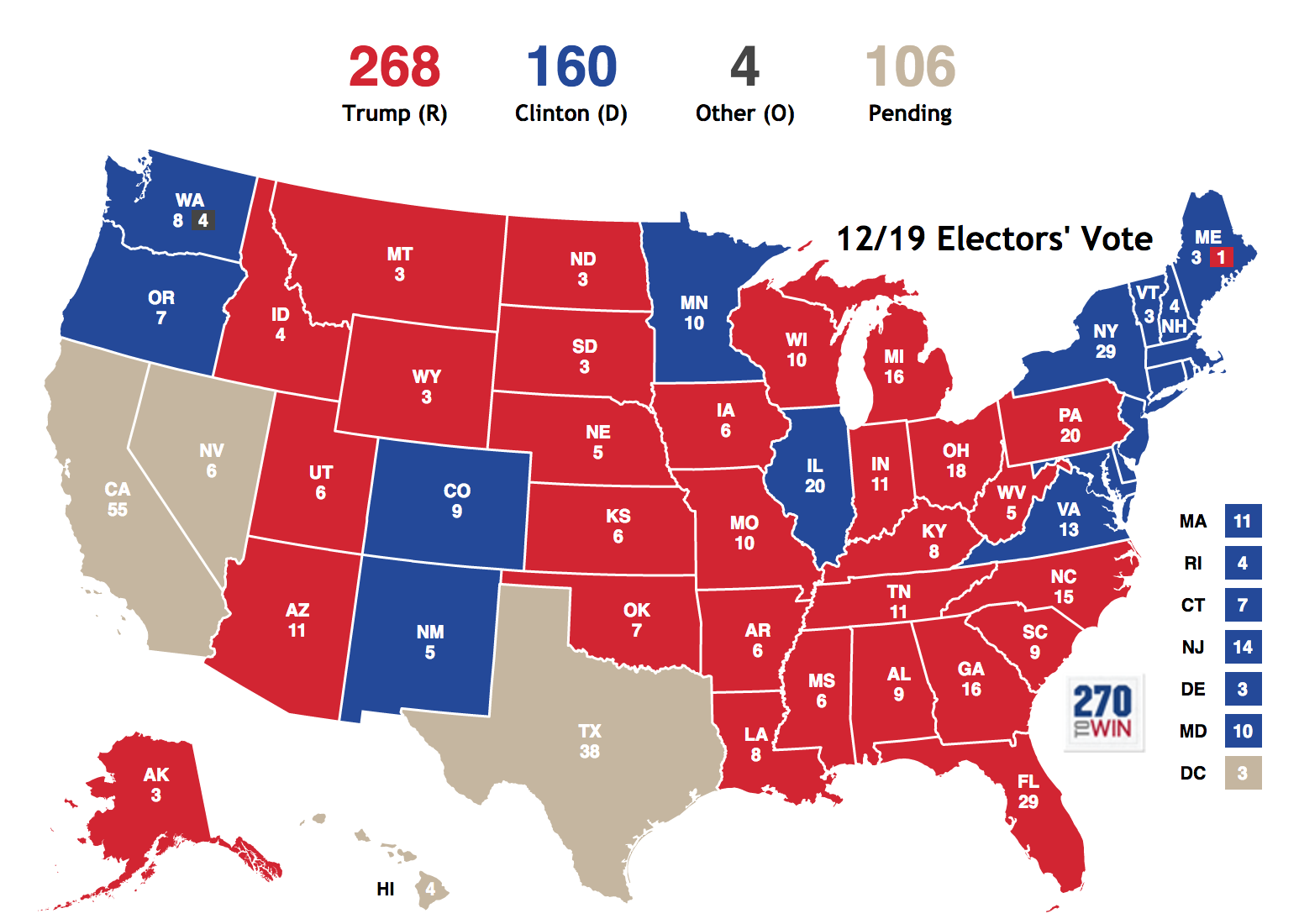 UPDATE:  Final tally from the Electoral college: Trump has 304 votes; Hillary Clinton has 227 votes; 7 votes went to others.  Details of the count here.

Donald Trump’s victory in November was not only the most important election result of our lifetimes, but ranks as one of the most significant events in recorded history, on par with the French Revolution or the fall of the Berlin Wall. And I’ll tell you why.

Good link a must-read!
It talks of stealth communism , it is true but we must remember in our quest for Americanism we cannot let our guard down and hand the oversight over to corporate cronies who are corporate welfare recipients.They want a new world order and use the World Trade Organization and the term “free market” to gain the enormous profits by sucking equity out of American wages.
Another commenter here on this site ,RR3 makes a valid point of Trump’s Trojan Horse I fully understand this. Let’s remember the swamp so Will trump be just the lead gator in the swamp only time will tell .I know this he has to “just break even in the
trade deficit ,build the wall ” or there should be a pile of people outside of the White House lining up to build the human wall crying lying Trump lying Trump.
God has given us the most beautiful thing in America ;our freedom. We use our freedom to vote for our Representatives but if we walk away from the polls and don’t hold President Donald Trump accountable we will be screwed and all we will be able to say is please pull my hair because I know you ain’t going to kiss me.
I did not vote for him just to be able to say Merry Christmas.
Trump in his job site mentality which I love understands this ; now off your ass and on your feet out of the shade and in the heat

I’m just glad Trump is accepting the election results. The media was really worried he might not do that before the election. Good on him.

Would love to see our Commonwealth reverse its electoral trend, as of late. Congratulations again, to President- Elect Donald J. Trump

It is up to the Republicans in Virginia running for office whether or not they want to defend Virginia and make Americanism and Virginiaism their credo and if they don’t want to live up to that heartfelt sentiment we all know how it goes; ” well you can tell them they can go f*** themselves”
I was a trump supporter very early on December 2014 saying too many if the Republicans don’t give me Trump in the primary they have no one.
We must distinguish the difference
1 who’s riding the coattails
2 who’s going to be Pro America Pro Virginia
3 who is going to be the copycat twit and just tweet

Funny that after all the lobbying to get Republican electors to flip, so far, the only faithless electors are all defecting Democrats who can’t stand Hillary. Just like the recounts, her numbers go down every time they stir the pot.

And I’m reading there were more faithless Democrats but that they were ruled out of order and overturned. Another spectacular embarrassment for Hillary.

And, for our own Tim Kaine, “Vice presidential voting was even more chaotic, with electors giving votes not only to Sen. Tim Kaine but also to Sen. Elizabeth Warren, Sen. Maria Cantwell, (Republican) Sen. Susan Collins, and American Indian activist Winona LaDuke.”

Defecting , I like that isn’t that what people do when they run from communist.

It must have been my subconscious speaking.

Turns out 1 more faithless elector from Hawaii bailed on Hillary, totaling 5. Also, “There were attempts by electors in Colorado, Maine and Minnesota to cast faithless votes, but these were disallowed.” So, she would have lost at least 8 if they were allowed.

The Donald lost 2.
It was an historic vote: 304-227-7. Hillary Clinton lost more defecting faithless electors than any candidate in American history.

He did a great job through the primary through the campaign I’ve never seen a candidate be so in control and know where he was going.
When it comes to the from here on out anything that the Clintons say the response should be ; that is a “deplorable”comment and ” what does it matter now “.

let’s all thank Miss Martin now for tolerating us in electing Trump and give her a big thanks to the photo at the top of this article. That’s how Trump won the good old red white and blue, Old Glory will never die.

Thank God!! Now we all need to pull together and help our President-elect #MAGA

After reading about yet another set of Islamic terrorist attacks, I can only say thank God we have a tough guy for President. Because of the decisions by the likes of a Obama, Merkel, etc. war is coming to Europe and the world. May they all be damned for the evil they have inflicted.

Unfortunately, the obama pro-terrorist immigration legacy will haunt the Trump administration. But at least he will go on the offensive rather than import more of the enemies.

Something has always stuck in my head and I can’t remember who said it I don’t know if it was Winston Churchill but; ” the best defense is a good offense ” .We can always apologize for mistakes but apologies for shortcomings in one’s responsibilities are unacceptable.