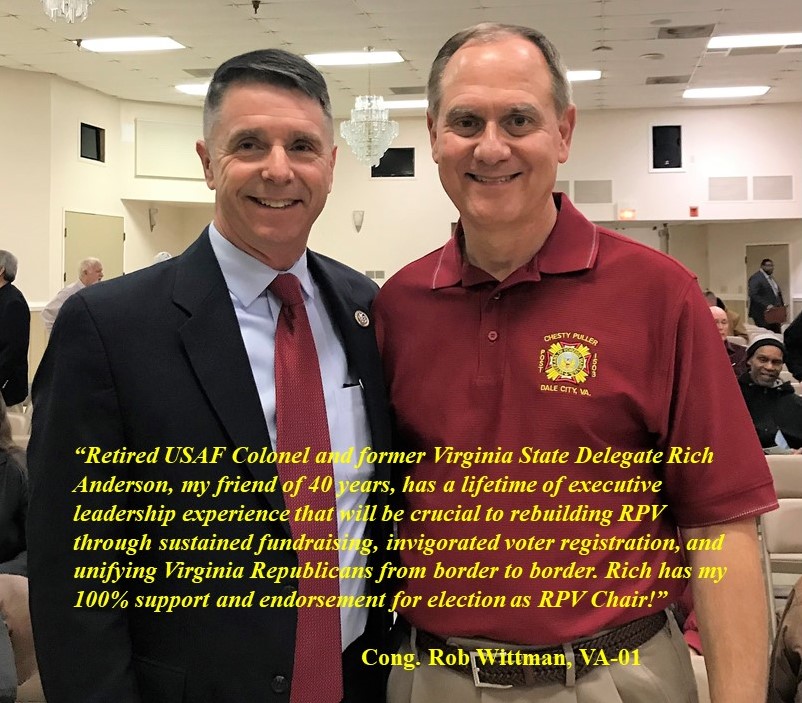 No matter where I travel in Virginia and in every email or phone call that I receive from fellow Republicans, the message is always the same:  After enduring a dysfunctional state party and heavy electoral setbacks over the last two years,

Congressman Rob Wittman (R-VA-01) gets it and has served Virginia’s 1st Congressional District and our nation with distinction since 2007. He is my friend of more than 40 years, since that long-distant summer of 1978 when we first met each other as members of Bravo Company of the Virginia Tech Corps of Cadets.

That’s why I’m proud to say that Rob has given me his unequivocal endorsement in my run to serve as Chairman of the Republican Party of Virginia. Rob’s endorsement is the first of many by distinguished Virginians throughout the life of our campaign.

But the most cherished endorsements that I have are the words of support and encouragement I’ve received from grassroots Republicans from every corner of Virginia who want to see our party thrive and win again.

Thank you to Congressman Wittman for his trust and confidence, and thanks to all of you who cherish the promise that the Republican Party of Virginia can once again be the pathway to restoring good government in Virginia and preserving our God-given Constitutionally-protected liberties.

I’m as close as your phone or keyboard, so reach out in these ways: