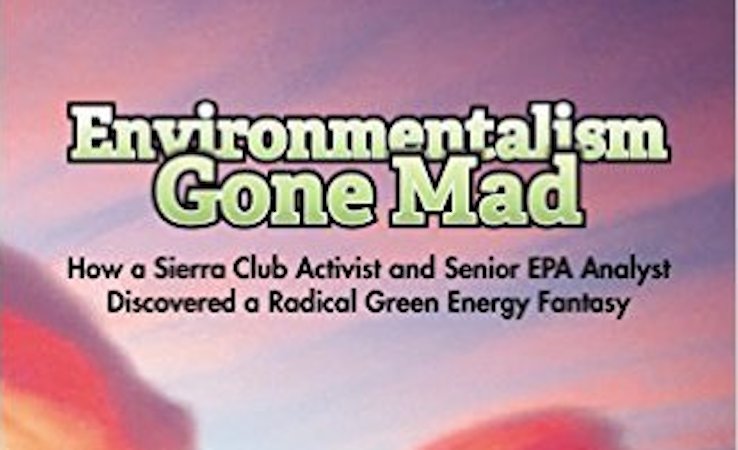 More CO2 is beneficial, not harmful, so you won’t find a review of this important book in the Richmond Times-Dispatch, the Washington Post, the New York Times, or in any of the other left-wing media.

The author received a B.S. in Physics with honors from Caltech and a PhD from MIT in Economics, and was a scientist and economist for the EPA for almost forty years. He is a certified “very bright guy.” He joined the EPA in the beginning, shortly after its founding by Richard Nixon, and has always insisted on rigorous work to make sure that the benefits of regulation outweigh the cost. They no longer do.

And when the Obama Administration’s EPA forced through the “Endangerment Finding” that CO2 is harmful to health, by illegally bypassing the requirement for scientific study and comment, Carlin was not allowed to comment and was then muzzled. At that point he retired, and wrote this book.

Obama’s CPP, Clean Power Plan (a “GEF” or “Green Energy Fantasy”), came out of the Endangerment Finding, and is based solely on the deeply flawed science of the UN’s Intergovernmental Panel on Climate Chance (“IPCC”). The IPCC addressed only man-made climate change, and failed to address at all the natural causes of climate change, which have been known and researched for many years. We have known of the Urban Heat Island Effect for a long time. Cities, with asphalt roads and roofs, and the discharge of massive amounts heat from chimneys and cooling towers, are always warmer than the surrounding countryside.

But it is the issue of man-made CO2 where the big debate lies.  All things being equal, CO2 should contribute a small amount to warming, but all things aren’t equal; any warming so far from CO2 has not been measured, Wrecking a major economy based on a fantasy is insane.

The bottom line is that the EPA failed to do an independent study, as required by law.

Fundamentally, CAGW (Catastrophic Anthropogenic Global Warming) science is completely invalid, as it has not been conducted according to the scientific method. Other hypotheses, many overlapping one another, have been advanced here and abroad over the years. They successfully explain how the climate has changed over the hundreds of millions of years where scientists have been able to reconstruct climate records. CAGW science doesn’t even get the twentieth century right. It really is science fraud, and the skeptics were right all along. But it lives on because so many people are making so much taxpayer and ratepayer money from it, and skeptics in government and the academy are afraid of speaking out because of the certainty that they will lose their jobs for doing so. McCarthyism lives on in the twenty-first century, the difference being that McCarthy was mostly right and the environmental radicals in the Climate Industrial Complex (Carlin’s term) are mostly wrong!

What we have now is a new Inquisition, but instead of Urban VIII vs. Galileo, it is the weight of the massive Federal government vs. a handful of retired scientists.

Those fighting the fight have in many cases (ironically) government-funded pensions, who no longer fear getting fired. And contrary to the lies of the activists, who always invoke the likes of the scary Koch brothers and “Big Oil” and “Big Coal,” their funding is basically their pensions.

If implemented, the CPP will cause electricity prices to necessarily skyrocket, in Obama’s words from 2008, causing catastrophic economic damage—in the trillions–and regular blackouts, and bringing the economy to its knees. And since it will certainly impact the poor and minorities most—both in the developed and developing world, it is also intensely racist, if you adopt the logic of the left.

This book is a weighty tome at 568 pages plus online appendices, but it does not require a science or math background to read it, just time. But its lessons need to be learned by all of us, as we have to fight implementation of the CPP by the Federal and State governments.

In Virginia, Governor Terry McAuliffe is, of course, all in. And why wouldn’t he be? He has no training in the sciences, and has become a very wealthy man from his green car scheme, that milked millions from the taxpayers of Mississippi for a project that never made any economic (or environmental) sense.

There are more typos than there should be (there shouldn’t be any), and Carlin is repetitive from time to time, but it is imperative reading for all of us. He gives the ammunition we need to stand up to the many in government, the academy, and media who are pushing the radical environmental agenda, which is not based on real science, and is nothing but a new religion for those who have abandoned our Judeo-Christian roots. We aren’t going to change the minds of those who hew to the Party Line, the “narrative,” but we can for those who are starting to wonder if, perhaps, the Emperor really has no clothes.

We must stop the implementation of the CPP at all costs, the most dangerous initiative so far from this Administration. It will bring electricity prices four times what they are now, and utter economic chaos, WITH NO ENVIRONMENTAL BENEFIT.

The last chapter, “In Summary” (thirteen pages), is available as a preview on the book’s website. But you can’t cheat: after you read the preview you are morally obligated to buy the book!

Bill Stewart and wife Katy are political refugees from the Peoples Republic of Manhattan, having fled in 2013. Katy was born and raised in Richmond, and they have a son and two grandsons in Falls Church. Bill is active in the Stafford County GOP.

As one who has held a life long belief in conservation and the rational protection of wildlife and fauna I’m constantly appalled to be viewed as affiliated with, in any manner, the leftest rogues of the EPA and the countless non profit enviromental association’s and organization’s whose perpetual fund raising efforts, are more intent on enriching themselves then supporting and enacting solutions. If you doubt this just be a conservative based environmental supporter and watch the mailing lists you are spawned onto overnight. The modern environmental movement has become a de facto progressive political action committee whose concerns with actual environmental issues are generally difficult to ascertain. Key deer, black bears and cypress trees just don’t relate much to income diversity and redistribution.

The latest climate change scammers both in government and academia have inflicted tremendous damage on the environmental movement by both turning people off to the environment as a valid concern and discrediting the movement by their use of pseudoscience or outright fraud as unquestionable rationalizations to engage in sociopolitical actions. It’s REALLY depressing when an idiot like “Bill Nye the science guy” is standing up claiming to represent your views and concerns. We desperately need to found conservative based environmental organizations here in the US to begin to counter the nonsense spewed forth in our schools and on the main stream media, which support what has become nothing more then a political sgenda. In short a sort of return environmentalism back to nature. movemnent.

I agree and we have to look at those who are helping to move the false hoods of Climate change. One such person is listed in the links included in these comments. Virginias’ must open their eyes to the secret government (Council on Foreign Relations) and its involvement in Virginia politics. CFR’s founder has pushed this Country closer and closer towards his goal of a New World Order/One World Government. http://www.energycentral.com/events/26247/CEO-for-the-21st-Century-Dominion-s-Thomas-Farrellwww.vmi.edu/Conferences/EV/2014/Farrell_Bio