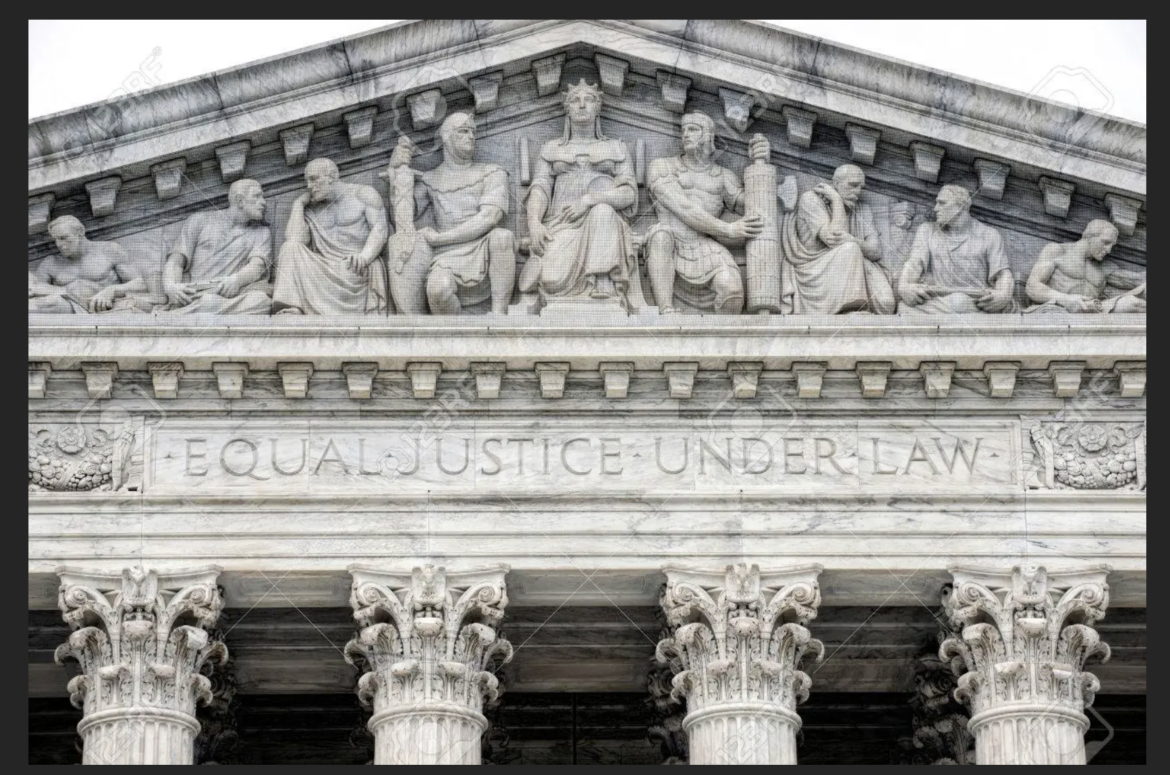 “Equal justice under law” is engraved on the West Pediment, above the front entrance of the United States Supreme Court building. It is based upon Fourteenth Amendment jurisprudence and has historical antecedents dating back to ancient Greece. It is the bedrock of our American legal system established by the U.S. Constitution and implies that all citizens are treated equally regardless of a political party or socioeconomic status.

However, the recent raid at Mar-a-Lago again illustrates that in reality there are currently two unequal tiers of Justice in America – one favoring the Democrat Party when they are in power and one biased against the Republican Party. Yes, if Donald Trump violated any federal statutes, he should be held accountable and prosecuted; however, it is obvious to the casual observer that democrats who have violated similar statutes dealing with national security and not been held accountable for their actions by the Department of Justice. The scales have been consistently “tipped” in their favor by the Department of Justice.

Hillary Clinton’s unauthorized classified email server in her private residence and destruction of government IT equipment; former National Security Advisor “Sandy” Berger’s theft of classified material unauthorized removal of classified material from the National Archives where he was lightly fined and sentenced to two years of probation plus community service; and former Attorney General Holder who was held in contempt of Congress yes no action was taken against him – yet Steve Bannon is charged for the same offense – incredulous!

Let’s not forget that  Ms. Lois Lerner was director of the Exempt Organizations Unit of the Internal Revenue Service (IRS) in 2005, and subsequently became the central figure in the 2013 IRS targeting controversy in the targeting of politically-aligned groups, either denying them tax-exempt status outright or delaying that status until they could no longer take an effective part in the 2012 election. On May 10, 2013, in a conference call with reporters, Lerner apologized that Tea Party groups and other groups had been targeted for audits of their applications for tax exemption. Both conservative and liberal groups were scrutinized  Only three groups — all branches of the Democratic group Emerge America — had tax exemptions revoked. Lerner resigned over the controversy. An investigation by the U.S. Department of Justice and Federal Bureau of Investigation, completed in 2015, found “substantial evidence of mismanagement, poor judgment and institutional inertia” but “found no evidence that any IRS official acted based on political, discriminatory, corrupt, or other inappropriate motives that would support a criminal prosecution.

Yes, clearly the scales of justice envisioned by of Founding Fathers to be impartial and neutral have been consistently swayed in the favor of one political party when they are in power. For the Democrat  Party the old adage appears to apply “rules for thee, but not for me.”

An increasing number of grocery stores are putting anti-theft devices on things like hamburger meet, baby food, and anything that seems to disappear without payment. The Dems like that trend because it helps promote the idea of slavery of the masses.

I’m going to Food Lion today in hopes I will meat some hamburger meet.

Meanwhile, at the border, Arizona is closing the border gaps using double stacked shipping covered in razor. Brilliant and inexpensive way to stop illegals while the BIDENITES refuse to follow the law.

Political show as the Biden administration had already gone out to bid to fill these gaps in the Yuma wall. Governor election coming soon and Republicans are falling behind.

1. The issue at hand is four gaps in the border wall near the Morelos Dam west of Yuma along the Colorado River which total less than a quarter mile in length. Closing these small sections of open border adjacent to the productive agricultural fields that exist on both sides of the border, tended by a 99.9% immigrant labor force, is nothing but political theater.

2. Just two weeks ago the Department of Homeland Security and the Biden administration announced plans to seal off these same so-called â€śgaps.â€ť

3. More border wall was built in Arizona than any other state, a fact that Ducey ignored when he claimed the federal government â€śintentionally neglected Arizonaâ€™s southern border as it installed barriers on the border.â€ť.

4. Just 4 miles to the south of these gaps lies an 8-mile stretch of border that has no wall.

5. The immigration crisis is real. Drought in Central America is real. Violence and extortion in the Americas, largely brought about by deporting felons educated in organized crime while incarcerated in U.S. penal systems, is real.

The number 1 issue to be addressed and it will require the firing of a large percentage of the bureaucracy.

Thank you. I was going to reply to this nonsense with a litany of facts but since The Lovettsville Lady has instituted a limit on the length of reasonable, fact-filled responses, your one-word response is perfect.

And meaningless. By the way, you must be Virgil. Better to stay that as you trolls are all innumerate.

Yep, Jeanine is actively censoring these days. Must mean the Conservatives are losing. Must have something to do with Trump stealing nuclear secrets.