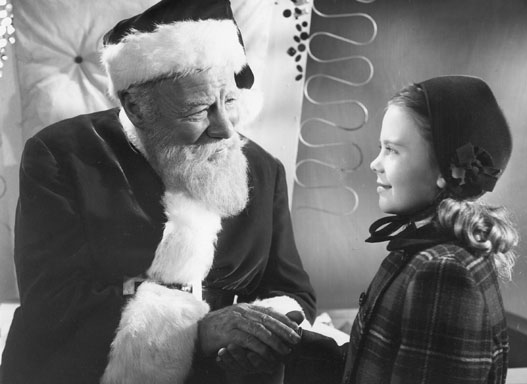 Edmund Gwenn and Natalie Wood in Miracle on 34th Street

In the 1940s, ministers were preaching about “putting Christ back into Christmas.” This started well before my time. Christmas was on a long, materialistic slide, and people were concerned about it. The film Miracle on 34th Street was released in 1947. I love its characters, story-line, and fascinating glimpses of 1940s New York. (Also, the incomparable Maureen O’Hara – named one of the world’s most beautiful women around that time.) In the film, Kris Kringle (Welsh actor Edmund Gwenn) says he’s been worried about Christmas for the last 50 years, so he’s in the capital of Christmas commercialism to try to do something about it. Some of the scenes are priceless, like his outrage at finding the Macy’s Santa (Percy Helton) intoxicated and unable to crack his whip.

But if you watch the film closely, you’ll see that Kris Kringle isn’t worried about what Christians are worried about. The birth of Jesus Christ isn’t once mentioned in “Miracle.” Kris Kringle’s Christmas is all about love, good will, giving gifts, “the imagination” (which is a place, something like the French nation or the British nation) and some kind of vague “belief” in…what? – well, in Santa Claus as a symbol of childlike trust, when logic tells you otherwise.

“She hasn’t really believed in anything for years,” says attorney Fred Gailey (actor John Payne) about the hard-headed, hard-driving realist, Doris Walker (Miss O’Hara’s character). He and Kris Kringle set out to bring Doris and Susan, her cynical daughter (Natalie Wood), back to “faith” – or the Hollywood version thereof. It’s a great film for many reasons, but illuminating the true meaning of Christmas isn’t one of them. Instead, it shows how far gone Christmas already was, seventy years ago. Jesus had already become the invisible Child.

Today, all that seems almost idyllic, in retrospect. We’re not worried about Christ being left out of Christmas now. We’re worried about Christmas being eliminated entirely. It is becoming politically incorrect even to mention the name of the holiday which has marked Christ’s birth for nearly two millennia. Not only may schools not mention Jesus, et al, but Santa, the reindeer, elves and the whole “secular Christmas” gang are out too. Snowflakes, skates, sledding and winter scenes are the schoolhouse limit for the greatest holiday in Christendom. Late-December school vacation is called “winter holidays.”

During the Obama years, the ancient greeting, “Merry Christmas,” became completely verboten. In most workplaces it became gauche – even actionable – to wish colleagues and customers anything except “Happy Holidays.” This made us culturally diverse enough to include Hanukah, Kwanza, Muhammed’s birthday, Muhammed Ali’s birthday, and at least some of the 180 Hindu holidays. During the Trump years, “Merry Christmas” has made a modest comeback, but our rancorous political divide has caused half of the country to suspect that the greeting is somehow connected to a president they dislike.

I don’t mean to diss anyone else’s religious holiday, but echoing Ben Stein’s comments of a few years ago, I’m getting a little tired of being pushed around for being a Christian. Said the Jewish Mr. Stein: “I have no idea where the concept came from that America is an explicitly atheist country. I can’t find it in the Constitution, and I don’t like it being shoved down my throat.”

It’s popular for Christians to denounce the ACLU for attacking Christmas, but the ACLU isn’t as good at erasing Christmas as Christians are, themselves. I cite two personal examples.

My second illustrative example happened at the annual Christmas concert of a fine Northern Virginia singing group. Their work has always been inspiring and excellent. In the year to which I refer their rendition of Christmas songs was splendid, as usual, but their artistic director (and conductor) had let them down. At the start of the concert he announced that to avoid becoming too predictable they had departed from their usual “lessons and carols” format – i.e., a presentation where music is interleaved with Bible readings which tell the story of Christ’s birth. Instead, readings would be presented from Longfellow’s poem, “I heard the Bells on Christmas Day” and Maya Angelou’s “Amazing Peace.”

The Longfellow poem was OK, being also a popular Christmas hymn. But Miss Angelou’s poem was a confused jumble of floods and avalanches and wondering if God is still keeping the “covenant.” Her object of worship is not the child Jesus, but “Peace”:

“We clap hands and welcome the Peace of Christmas.
We beckon this good season to wait a while with us.
We, Baptist and Buddhist, Methodist and Muslim, say come.
Peace.
Come and fill us and our world with your majesty.
We, the Jew and the Jainist, the Catholic and the Confucian,
Implore you, to stay a while with us.

At this holy instant we celebrate the Birth of Jesus Christ.

Into the great religions of the world…”

My purpose is not to critique Miss Angelou’s work, but simply to say it is no more about Christmas than Miracle on 34th Street, The Grinch or Elf. The Savior brought peace, but reconciliation of the world’s “great religions,” or elimination of war, crime and extreme weather, are not that peace.

Jesus said, “Do you think I came to bring peace on earth? No, I tell you, but division.” The “peace” of Christmas is in the hearts of people who accept the Savior. If all men accepted Him, war and crime might indeed end, but that would be a secondary result.

I object to replacing Christmas songs with generic “praise” music, in slavish devotion to some bizarre vision of musical style. And I protest, in the strongest terms, any attempts to align Christmas with the confused musings of a poet whose own sexuality is her work’s dominant theme.

Nothing personal against Miss Angelou, but at Christmas let’s stick to the Bible. It contains the true story and the true meaning of Christmas. Ditto for the great, historic catalog of inspired Christmas music. Some things can’t be improved.

Erasing Christmas? No worries about outside influences. Christians are doing it themselves. I hope we can find our way back before it’s too late.