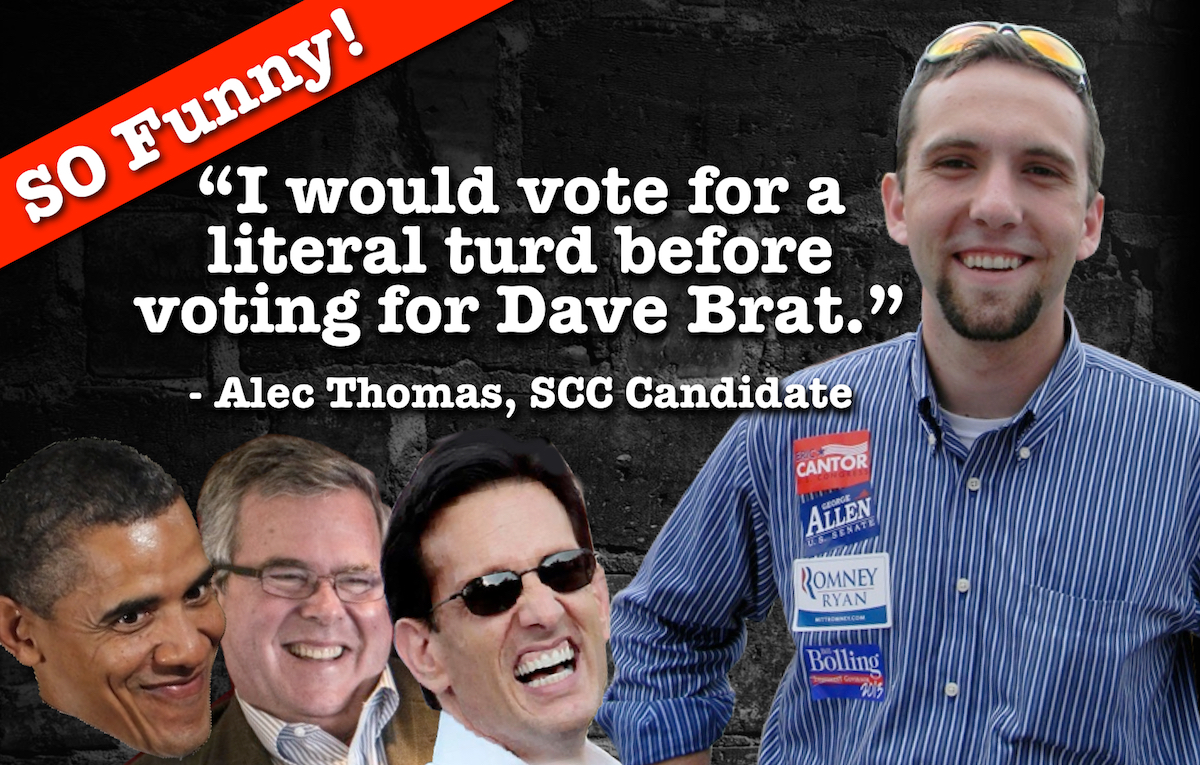 Everything You Need to Know About the 7th District VCN Ticket

The True Conservative Ticket of Susan Lascolette, Dewey McDonnell, and Ron Hedlund are the ticket to support in the race for RPV State Central Committee at the 7th District GOP Convention on Saturday, May 21st. They are the grassroots ticket, for the people and by the people.

The Conservative Unity Ticket (a poorly thought out acronym, BTW), consisting of Alec Thomas, Jasen Eige, and Marie Quinn, is in its totality the anti-Dave Brat establishment ticket that will be used to take over the State Central Committee by the McGuire Woods/Cantorite Richmond Establishment crowd…the same crowd that continues to work towards the eventual defeat of Dave Brat in a future nomination contest.

Jasen Eige, of Henrico, is a former McDonnell administration official and current lobbyist at McGuire Woods Consulting.  He was the last minute draft choice of the VCN when they couldn’t find another candidate. The criticism of Jasen is simple: he’s on the ticket to rubber stamp the VCN agenda, which is the takeover of State Central by the Richmond Establishment and eventual defeat of Dave Brat in a nomination contest. Also, as senior counsel to Gov. McDonnell, he was a cabinet level appointee who was asleep at the wheel during the Johnnie Williams saga when he should have been working to keep the Governor on the straight and narrow.

Alec Thomas, of Chesterfield, whom we believe is a paid employee of the VCN or affiliated organizations, is the son of RPV First Vice Chairman Mike Thomas, and is the most virulently Anti-Dave Brat candidate in the Commonwealth, having called the Congressman a “steaming pile of crap” and fighting against him at every turn.  He is essentially being paid by the establishment to run for State Central. It is not Congressman Brat that is the crap-pile. Dave has been a good and commonsense Congressman for the 7th District, and on a personal note, is a great friend to me on one of my issues, including the saving of 35,000 American jobs.

Before Alec went to work with the VCN, he was the campaign manager of Henrico Sheriff Mike Wade abortive campaign to challenge Rep. Dave Brat for the 7th District GOP nomination.   Furthermore, Alec led the fight on the 7th District Committee, which at the time was controlled by VCN members, to create the mandatory delegate filing fee in order to vote for the SCC seats at the 7th District Convention. That was a naked attempt to restrict the participation of the grassroots in the SCC voting process, while allowing the big money interests backing VCN to pay for the fees for their supporters. 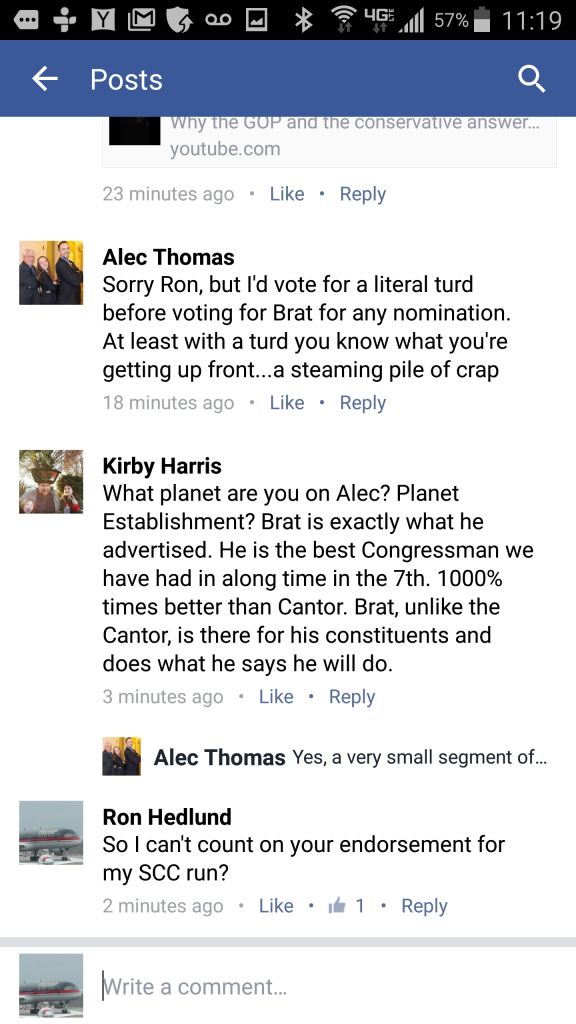 Marie Quinn of Chesterfield, a SCC incumbent, is a good person, and the only member of this ticket that has been a true Republican volunteer. In another place and another time, I’d advocate voting for Marie Quinn, except that she should never have associated herself with the VCN ticket.  While she is an exceptional Republican volunteer and activist, she has not shown herself to be an independent voice on State Central.

Why Conservatives Should be Concerned About the VCN Ticket

1 – They are being used in the effort to take the SCC away from the grassroots and give it to the Richmond Insider/Lobbyist Crowd.  Call it the “McGuire Woods” problem.  Like RPV First Vice Chairman Mike Thomas, Eige is a senior lobbyist at McGuire Woods (not that there’s anything wrong with that, outside the party).  Alec Thomas is the son of Mike Thomas.  Electing them would be an expansion of direct lobbyist influence and control over the Republican Party, which is the opposite of giving greater voice to the grassroots.  What do lobbyists want to give politicians?  Money, mostly.  But when they’re in positions of power within the party, they can also pull strings behind the scenes to favor those politicians.  Say “NO” to the McGuire Woods takeover of the 7th District Committee and RPV State Central Committee!

2 – As a group they are Anti-Brat. Susan, Dewey, and Ron are “Original Brat Pack” members and endorse Congressman Brat’s efforts to craft conservative solutions for problems in Washington.

3 – They are NOT the conservative ticket. Alec Thomas, for example is a noted social liberal and has no core values, going hither and yon on the issues, in whatever direction the wind is blowing, all for short term political gain.  In contrast, Susan Lascolette, Dewey McDonnell, and Ron Hedlund are all anti-tax-and-spend, pro-military, pro-traditional marriage, and pro-life.

On May 21st, attend the 7th District Convention and stop the VCN ticket.

Everything You Need to Know About the 7th District VCN Ticket was last modified: May 13th, 2016 by Aaron Gulbransen

Since this has been set up as Brat v. Anti Brat… VOTE ANTI- BRAT!

“Crap, TBE published a post exposing our entire ticket in the 7th for who they are… quickly, deploy Southall to distract!”

No evidence to criticize Eige on the McDonnell mess. He testified that he was wary and warned McDonnell about Williams, and no one said any different.

Bottom line is that there’s only so much a lawyer can do when the client ignores them.

And Hedlund is just a hotheaded nutball, so no sale on him.

At least when Steve Albertson or Jeanine do a piece they comment, where is Aaron???!!!!

This is the problem with John Adams. He is the head honcho over at McGuire Woods and his people are pulling the strings on all this. Anyone who thinks he isn’t Establishment with a capital E is either lying or delusional.

So if one of the good guys makes good and lands a top job, despite a strong resume.. then no good.. MMMKay…

No, Turbo– the problem is that as a leader of McGuire Woods (look at his website where he touts his leadership positions there) he’s now beholden to special interests, including those of the Establishment. Defending big corporate clients and banks comes with a cost. When Adams left government, he made a choice to work for McGuire Woods and all the baggage that comes with that. So, now he has to explain it–and why we should believe that he’s a true conservative. And don’t tell me he went to work there because he needed money for his family. Look no further than Gov McDonnell to see why that’s a loser argument. If you are broke or can’t afford the salary that public office pays, then don’t run.

Baron or whatever your real name is, you clearly don’t understand the difference between McGuirewoods consulting and the other 99% of the company. The consulting side is a subsidiary and makes pennies compared to the legal side. They run in completely different lanes…

Yes, thank you for making my exact point for me–John Adams works for the McGuire Woods law firm, which counts many banks and corporate giants like Dominion as its clients, and, as you say yourself, makes a ton more money than the consultants. (Although I’m sure John’s brother Tray Adams who also is a partner at McGuire Woods Consulting, will be disappointed to know that his brother is making much more money than him). So again, Turbo, this is the issue with Adams’ candidacy–he makes hundreds of thousands–if not millions of dollars per year at McGuire Woods representing big banks, big power companies, and other big corporate special interests, and we are supposed to believe that he’s a true “constitutional conservative” just because he says so? He’s the global hiring partner of the McGuire Woods and is in charge of their white collar team. Nobody with a straight face can make the argument that he hasn’t sold out. Again–nothing wrong with it–he’s entitled to make choices; but so are we as voters. I say no!

McGuire Woods CONSULTING is the lobby arm. NOT the Law firm side, although I fail to see how someone going to work for one of the most respected law firms in the state is a bad thing. I know several of their lawyers and I promise a few of them are so far off the right field I can’t stand to listen to them. So I don’t understand your problem.

Peacemaker, if you know lawyers at McGuire Woods, then you should also know the worst kept secret in Richmond–most of the firm, especially the lobbyists–sorry, I mean “consultants”–who have to appear before Rob Bell and his colleagues frequently, is unhappy with Adams running. Check with your friends over there at McGuire–they will fill you in on what’s going on behind the scenes there. It’s juicy.

Too funny…this is absolutely correct…and even Mark Obenshain’s daughter works for McGuire Woods:

could the author deny this…..

You Bearing Drift guys are finished. So you hate Dave Brat for taking out your gravy train boy Eric Cantor. Now you are working the system to restore yourselves at lower levels of the party organization so you can one day come back to power and the money from lobbyist will flow again via a future Eric Cantor.

The rank and file left your bull with the election of Brat. And the GOP is doomed anyway in the long run whatever it is, Bearing Drift Insider schmucks or Dave Brat…

You help the Democrats win the demographic battle. Virginia is a destination for third world immigration who will put them Democrats over the top for the rest of your life. 3.2.1. it is racist to oppose amnesties!!! (Shaun Kenney… Drive out the Nativists so our corporate donors can have more cheap labor!!!)

I’m not affiliated with Bearing Drift.

I think if we comment there (due to more well rounded, objective reporting…or whatever) we are Bearing Drifters (I’m a gal, so guy doesn’t fit) Anyhoo…you know those damn sticks and stones. They should welcome all people, no?

I am about as Anti-Brat as there is, but I sure as heck am not a Cantor fan.
I gave Brat a chance, I was thrilled when he beat Cantor.
But in addition to, and before he turned out to be the LEAST effective congressman in history, he proved himself a liar. And that is something I do not forgive of anyone.