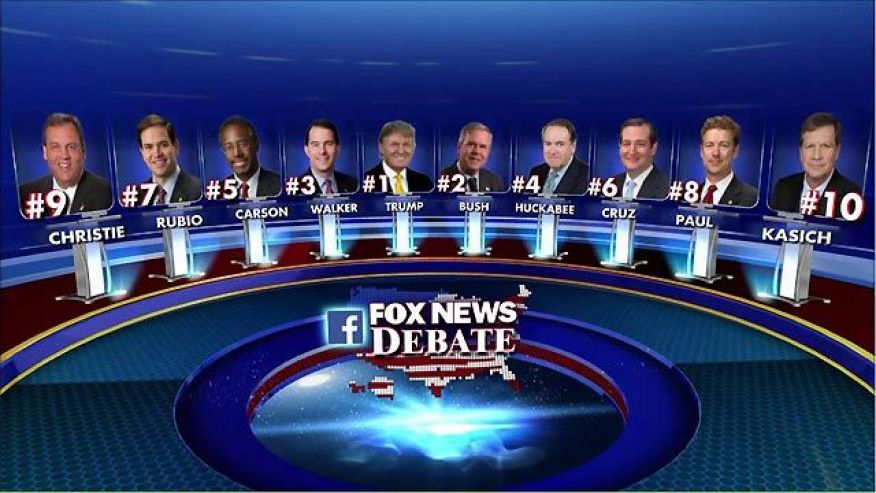 This seemingly minor decision so early in the process may be too formidable of a hurdle for these candidates to overcome.

Fox News announced the lineup for Thursday eveningâ€™s Republican debate.Â  The debate is limited to 10 candidates in order to keep the debate â€œmanageable.â€

The roster of 10 candidates was determined based on an average of the five most recent national polls. Trump as expected made the cut, securing the top slot. Right behind him were Bush and Walker, who each have posted strong numbers in recent surveys.

The story has two important elements Inclusion and Exclusion.

A few of the candidates are included with reasonable numbers that could have been expected well before last evening were Bush, Walker, and Christie (who polled at the bottom of the ten).Â  None of their numbers were particularly surprising.

Trump, continues to exceed my polling expectations, but I have a post coming on that issue shortly.

Huckabee and Carson are outpolling a handful of serious contenders that have been planning and strategizing for years.Â  Both are social conservatives.Â  Carson has the appeal of being an outsider, a truly brilliant man, and possesses an incredible life story.Â  Huckabee has run before, and has had national media platforms from which to build a reputation and name recognition.

Kasich eked in.Â  A former hard line budget hawk, Kasich claims to bring pragmatism to the debate.Â  He probably made the stage based on the good timing of his announcement.

Included with weaker numbers than expected, Cruz, Rubio, and Paul

These three candidates have the ability to be regarded as the anti-Bush.Â  All three have been planning this for years.Â  All three are polling below their previous national poll numbers.Â  These three need to focus on proving themselves as better statesmen and more conservative than Walker (no small feat) as I believe Trumpâ€™s rise in the polls is not long for this world.

The crabs at the bottom of the barrel

Seven candidates will participate in a pre-debate as they have been excluded from the main event.Â  The exclusion of these candidates will have a profound effect on their campaigns.Â  Climbing back after being officially relegated to second tier will be nearly impossible.Â  One or two of the excluded seven will have a chance to break back into the top ten, but it will be a hard uphill climb.Â  Name recognition could not even save Perry and Santorum from second tier status.

These seven candidates NEED to grab headlines.Â  Saying or doing something outrageous may be the only thing that brings these campaigns back.Â  In my opinion only three of these campaigns have a reasonable chance of breaking back into the top ten, Perry, Fiorina, and Jindal.

The Fiorina and Perry campaigns seem to know their chances.Â  Rather than complain, they have accepted their fate and are already planning their next move to break back into the top ten.

Of these, Fiorina has the best chance, as she is the best at messaging of all 17.

If one of the “Top 10” stumble, it will provide an opportunity for one of the “Magnificent Seven.” It’s still early in the process.

I have a question to all. Do you believe the “top ten” as selected by a poll driven percentage with a questionable margin of error variable is any type of make or break situation for these candidates, will this move candidates in the pre-primary polling game and how much are these debates going to really contribute to the thinning process vs funding, local organization and message? I wonder? Will the debate format contribute to or diminish a candidate like Trump? Unless the existing conservatives are willing to step outside their talking point comfort zones (something they have not demonstrated much enthusiasm to do to date) how will these sound bite opportunities buy them any lasting leverage? If you have the funds and the base support to make it to the South Carolina primary then the real game begins. And in the age of PACs and dark money and less then one hundred wealthy individuals injecting significant funding to selected candidates these debates look more and more to me like media stagecraft. Is all this meaningful or is it a sideshow to the likely outcome of a Bush, Trump, “pick one” runoff post Feb. 20, 2016. The RNC’s effort to front load this process to help Jeb Bush may in the end bite rather then to provide the open field for him they expected.

In my opinion only three of these campaigns have a reasonable chance of
breaking back into the top ten, Perry, Fiorina, and Jindal.

Your headline doesn’t match your writing.

When one has to use a term such as “break in” to describe getting back into top 10, that in itself tells the story. Sounds more like a bank job than a political campaign.

I, and lots of people I know, plan to watch the forum at 5PM showcasing the rest. Any outstanding quotes will receive a lot of internet media attention. It might be the most valuable exposure with a smaller group. We’ll see.

I’m hoping that Carly Fiorina will be impressive enough to jump into the top ten for the next round. I find her amazingly knowledgeable and articulate