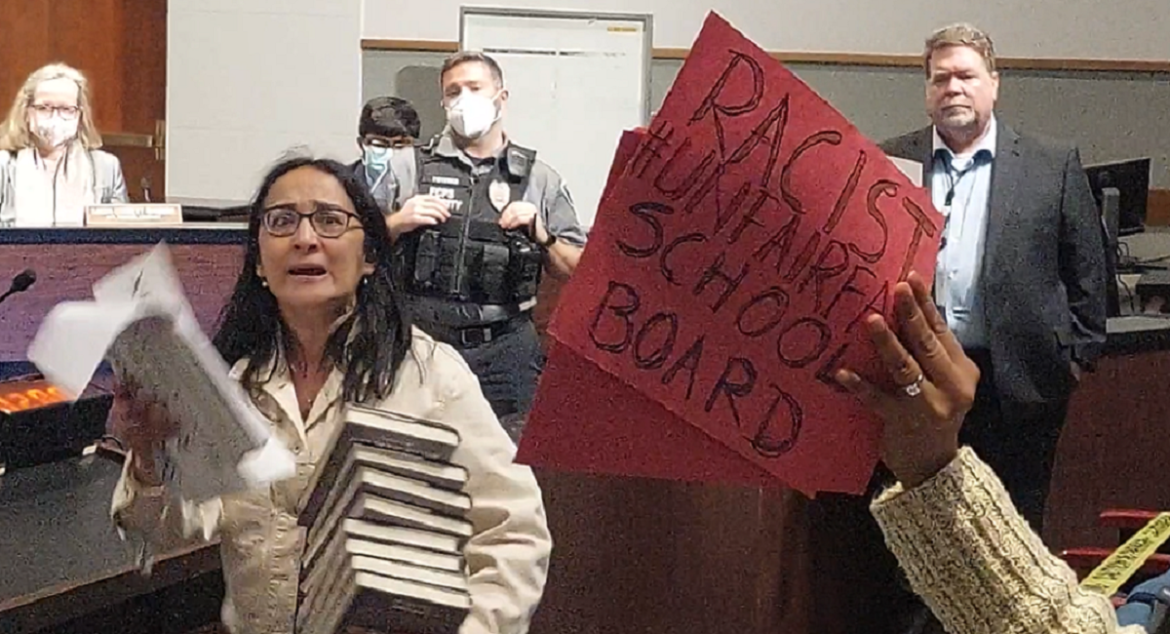 The Daily Wire has published a very interesting article covering Thursday’s Fairfax County School Board when Asian parents stood up to the board and in a show of true courage the board fled. Everyone should read this article.

Asian parents were objecting to the school board’s appeal of a judge’s ruling that TJ could not use a race-based admission program for Thomas Jefferson high school for Science and Technology. The ruling forced Fairfax County to return to the merit-based program they have always used for admission to the number one school in the nation.

The Thomas Jefferson School For Science and Technology once had the highest math scores in the country, but after the school board determined that that was not â€œequitable,â€ they jettisoned the math test used for admission in favor of a process based on how â€œdisadvantagedâ€ students were. The result was that the famed school had to begin offering remedial math. (Emphasis mine.)

Asra Nomani, the India-born mother of a TJ student who was involved in the successful lawsuit, spoke at Thursdayâ€™s meeting, and told the board â€œFor the last two years you have been trying to make us invisible, but a federal judge has ruled that in fact you are going to go down in history just like I told you you would, just like the school board inÂ Brown vs. Board.â€

â€œYou are the new face of racism,â€ she said. (Emphasis mine.)

Nomani brought with her to the podium a stack of copies ofÂ Race To The Bottom, a new book by Daily Wire investigative reporter Luke Rosiak, which highlights anti-merit, anti-Asian school policies and chronicles the Fairfax school board in particular.

â€œI have here a copy of a book for each one of you,Â Race To The Bottom. And you are all in this book. A book for you Karen Corbett Sanders, a book for you Stella Pekarsky, a book for you Abrar Omeish,â€ she said, as the crowd erupted in cheers. â€œAll of you have failed us. I have all of these books, I hope you read them from cover to cover and see yourself in the pages of history â€” as failures.â€

The citizens of Fairfax county are paying high-priced lawyers at Hunton Andrews Kurth, the successor to Hunton & Williams, the firm that supported segregation in Brown v Board of Education, to fight merit-based admissions to the best high school in the country.

Fleeing a meeting due to a protest? Only reason for that is if the police or sherriff’s deputies sense a dangerous situation But a bunch of Indian American moms screaming???? Really!

Brown people yelling at Democrats telling them what a bunch of racists they are destroys the Democrats’ narrative. It was too politically damaging to sit there.

You know if you really wanted â€œequity â€œ in public schools, you would fund them all to the same level as your best school. Then address the outliers instead of just canceling them out as has been happening for decades. The Asian parents and their lawsuit are merely pointing out the flaws to the boardâ€™s theory.

The problem is not funding. All schools are funded at the same level with lower income schools getting a bit more money. TJHSST also receives a bit more money because it has a longer school day, an extra period a day for extracurriculars, requiring teachers to work a longer day than at other FCPS high schools. But funding is not a problem at any of our schools.

Iâ€™m glad you high IQ Asians are waking up. As an unapologetic white man, I salute your intellectual ability, and incredible work ethic. Please align yourselves with white parents to protect your children from the degradation of educational school standards to promote the Marxist strategy of political correctness. The dumbing down of standards in schools will destroy your childrenâ€™s potential.
Fight, fight, fight to remove all the pigs from school boards.

Hey Erica, pronoun She It, Perhaps you remember a few years ago I pointed out to you that pursuing affirmative action in the schools was going to cost you Asian voters â€¦ You said something about that being the most racist thing you ever heardâ€¦ Well check this out pendejo!!
The entire Fairfax County, Virginia school board fled their own meeting on Thursday as Asian parents chanted that they were â€œracist,â€ following a federal judgeâ€™s ruling that the board broke the law by pushing Asians out of its magnet math and science school, and the boardâ€™s vow to appeal the ruling rather than reinstitute merit-based admissions to the school.

HA HAâ€¦ you are the real racist !!!! Oh the irony… the flight into lunacy of idiot liberal school board members pushing their SJW woke CRT agenda on the public… only to have “MINORITIES” rise up and scream racism at them!!! HO BOY ERICA!!! Oh and Johnny too… that is just the kind of crap sandwich that should be shoved into your two mouths.. Savor the flavor boys… it is costing you elections…

The left has swung the sword of racism for decades. Now the other edge of the sword is coming into play. Cries of racism have always had a second edge and here it is.

The Democrats have abandoned any kind of excellence in favor of the misery of global socialism. If you vote Democrat, success is the last thing you should expect as their ideological empire is built on lies, deceit and failure..