Happy Birthday America!  While celebrating our Independence today we also remember all those who fought to gain, and keep, our freedom and Independence.  Marine Corporal Ronny “Tony” Porta is one such hero.  He didn’t grow up in Lovettsville, he grew up in my hometown of Beltsville, Maryland, but he has chosen to make Lovettsville his home.

Corporal Porta was 20 years old when he was severely injured in Iraq in 2007.  Two of his best friends were killed in the roadside explosion. Tony was burned over 35% of his body.  He lost his right arm, and two fingers on his left arm.  His face was disfigured beyond recognition.  Tony returned to the US only to be met with disrespect and ill treatment.   Tony’s response?  “Freedom isn’t free”.

Tony feared that his disfigurement would prevent from finding love but he was able to find love, marry, and have a son.   He named his son Kenneth Charles, after the two friends in he lost in Iraq.  He yearned for a place where his young family could build a home and be accepted in a community.  Tony, his wife Daisy, and his young son, found that in rural Loudoun County.  Tony has been welcomed and celebrated since he made the decision to make Lovettsville his home.  Just across the Potomac River, Brunswick Maryland has also celebrated Tony.

Only July 2nd one hundred people joined Tony in Lovettsville to help break ground on his new home.  The custom home is being built by the group Building for America’s Bravest program.  From Leesburg Today,

Through the program, a joint initiative of the Stephen Siller Tunnel to Towers and the Gary Sinise foundations, Porta and his family will receive a brand new “Smart Home” equipped with the most advanced technology designed to help him live independently.

The energy efficient home comes completely furnished and will be tailored to fit Porta’s individual needs. Every room will have fully accessible features, such as movable countertops and cabinetry that can be electronically operated by an iPad or smartphone.

The house will be just under 3,000 square feet. Construction costs alone may reach the half a million range.

Senator Dick Black and Delegate Dave LaRock were both in attendance at the groundbreaking.  Senator Black said,

On behalf of the state of Virginia, and as a member of the Marine Corps League myself, I’d like to thank [Tony] for everything he’s done for us,” Black said. “This was his sacrifice and I’m really pleased that people can give back.”

Other groups also contributed to the Porta’s house including the Semper Fi Fund, Master Brand Cabinets Inc., Glidden Professional, Home Depot, Carpet One Floors and Home, and W.C. Ralston Architects.  The Porta’s were also given a handmade quilt by the charitable organization,  Joshua’s Hands.

Tony’s new home, Gorgeous! Completely furnished and outfitted for him. 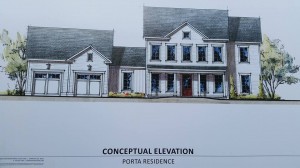 A big thank you to all the sponsors who helped to make this happen.  Patronize them an thank them for helping our hometown hero. 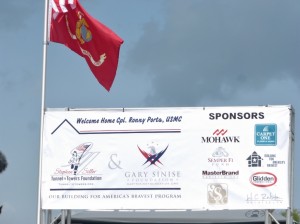 Welcome home Tony!  Lovettsville is so proud that you have chosen to make your home here!  Our Hometown Hero!

What a wonderful story about one of this country’s finest examples of a soldier!! If I had the honor of meeting Ronny, he would not be met with scorn nor disgust, but with a great big hug and the loudest THANK YOU AND GOD BLESS YOU that my voice could sing! I wish Ronny, Deicy and their son a wonderful new beginning in their new home!!
God bless……..

Glad to have Tony here. He is “the best of the best” and has had his courage and determination truly tested and passed with marks that few of us could ever achieve!!