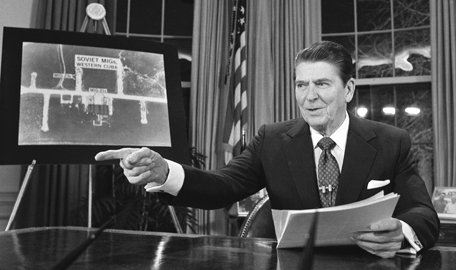 During my career, I was the technology administrator for air to air and air to surface weapons for the Naval Air Systems Command. Â My client was the Naval Weapons Center in China Lake, Ca whose primary technology initiatives involved missiles. Â Over the years, I managed to introduce kinetic kill and directed energy weapons, non-lethal weapons, and asymmetric warfare ideas into the missile mix. Â What most people donâ€™t appreciate is the time it takes for weapons to get from the idea stage to the practical use stage â€“ design, development, demonstration, multiple prototypes, acquisition, special support equipment, documentation, train users and then place a reliable and effective weapons systems into military use takes a number of decades.

Before Jimmy Carter became president, he was Rickover nuclear submarine and Navy team member. Â He became steeped in technology and its many nuances.Â  When he became President, he was confronted with the growing cost of the military and the competing costs of domestic need. Â He came up with the idea that military size and costs could be cut without sacrificing the militaryâ€™s operational advantages by turning to the technology base. Â The concept introduced in military policy was known as the â€œFielded Technology Advantageâ€, and it was intended to ensure American military operational superiority in an engagement with any enemy.

President Reagan took the technology advantage part of the argument and initiated the Strategic Defense Initiative Office aptly named Star Wars. Â Although chided by Democrats as a waste of money (Note any similarity today with Trump?), Reagan got his initiative and the results were spectacular. Â Scientists from universities, businesses, and government laboratories showed up. Â Inventors by the hundreds walked through the Star Wars doors. Â Thousands upon thousands of ideas eventually lead to hundreds of thousands on new business ventures and tens of millions of Americans being employed. Â The Soviet Union, realizing it could not compete, dissolved its tyranny and freed millions of people and their nations from behind the Iron Curtain.

There really isnâ€™t much to say about President George H.W. Bush. Â He squandered both the Reagan legacy and his overwhelming political support coming out of the Gulf War by repudiating his â€œno new taxesâ€ pledge. Â President Clinton won election with the slogan â€œItâ€™s the Economy, Stupidâ€.

To make good on that slogan, Clinton opened up the American technology basket to the world. He put the Department of Commerce in charge of technology marketing decisions and required the DOD to comply with the policy change. Â Thus, the technologies that had been so carefully and jealously guarded were suddenly exposed to the markets of the world. Â Many technology administrators fought the change, but it proved frustrating and unproductive. Some technology administrators retired and some changed jobs, some tried to sabotage the transfers or the sales. Â Many refused to comply or delayed indefinitely information requested by the Department of Commerce. Â Probably the worst of it was the insult forced on a technology administrator who didnâ€™t want a technology placed into the world market. Â He or she would have to fill out a 20 to 30-page rebuttal. Â This was onerous and often didnâ€™t arrive in time to stop a sale.Â  Â It was a turbulent time to say the least.

The Chinese do have a Pit Bull on a leash, its name is Kim Jong Un and he lives in a rather ratty backyard in an absurdly lavish doghouse. Â Over the years, the Kim family steadily appropriated the Chinese (American) missile technology, and under Kim Jong Un they have perfected it to the point where it can fire missiles at Hawaii and the continental United States. Â Their work on a nuclear warhead, or maybe a biological warhead, for said missile is also underway.

What is the bottom line: Â Clinton sold the technology to China. Â George W. Bush was too busy fighting the aftermath of the 9/11 terrorist attacks to pay attention to North Korea. Â Obama was too busy with his open borders, multicultural, Obamacare welfare state ideology to pay attention to North Korea even when his intelligence organizations point out the North Korea was likely selling missile and nuclear technology to Iran.

Trump has had to come up with a strategy to deal with the North Korea problem. Â Unlike his last four predecessors who did virtually nothing or even created the problem, he has to stop a threatened major nuclear attack on the USA or its allies. Â So far, tough talk backed up by a massive buildup of American might appears to be having some positive impact. Â However, while Winter Olympic talks of a unified North and South Korean team are underway, North Korea continues to prepare its sites for what could be another missile test or even the real thing. Â Maybe the accidental Hawaiian missile alert warning has been useful if for nothing else than to create a sense of how serious this situation is.

Sustanciate your lies, please? Which one of your lies you ask? The one about Clinton helping China with its rockets. I donâ€™t buy into your resume BS either. You may have launched bottle rockets……

One thing is for sure. Republican â€œCrookâ€ Richard Millhouse Nixon did help China!

Bottom line? Last summer a US Navy jet shot down an antique Russian made fighter bomber in Syria. Why am I bringing this up? Because the media forgot to tell the people that it was the second air to air missile fired that actually shot down the antique Russian plane. The first missile the Navy fighter jet fired at the Russian antique missed. It was our finest, latest version of that missile, a sidewinder if I remember correctly. That one missile costs us over one million dollars. Inexcusable. Just like Navy ships becoming a hazard to navigation.

Say what you want, but our sâ€”t just doesnâ€™t work anymore.

The cost of missiles is a serious issue. It makes no sense to expend a million dollar missile to blow up a mud hut with a thatched roof. Drones equipped with high fire rate guns are really quite effective in 99% of the situations.

As far as our military equipment not working, let’s hope we don’t really have to try it out in an actual war. War is hell, and it ought to be hell so that it is a last resort.

I never liked the Star Wars name. It was invented by liberals to ridicule the idea. Incidentally, for some reason liberals seem to have a problem with anti-ballistic missile systems in general viewing them as provocations somehow.

Since when did anyone credit liberals with common sense? Everything is sacrificed for an emotional commitment to the failed ideology of socialism. A few million dead Hawaiians would be no big deal to such SJWs.