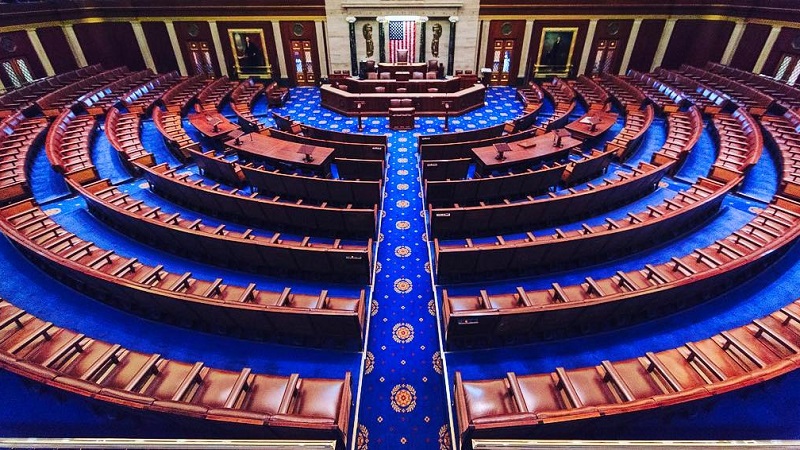 US House of Representatives (source: amacad.org)

GOP gains in House of Representatives; leads based on votes tallied

You would never know it from the media, but Republicans are currently leading in 218 of 435 House seats. If vote-counting stopped right now, they would take control of the U.S. House of Representatives from the Democrats, even though the mainstream media declared last night that the Republicans would lose seats in the House.

Of course, vote counting continues. Late-counted ballots are likely to flip a couple races, and thus give Democrats a narrow majority of at least 219 seats. But the possibility of Republicans taking control of Congress cannot be ruled out. But you would never have known this from reading this morning’s newspapers.

Even as preliminary election returns showed more than a dozen Democratic members of Congress losing their races, newspapers continued to claim that the Democrats were likely to expand their margin of control in the House of Representatives.

Even as I am writing this, the Washington Post claims that “the majority that Democrats won back in 2018 is safe; the question is whether they can expand it beyond the 41 seats the Party picked up” in the 2018 election.

On November 4, the day after the election, the New York Times wrote, “Democrats aimed to add to their majority in the House….Democrats were on track early Wednesday to maintain a firm grip on the House.”

20 Democratic members of the House are currently trailing in votes to their Republican challengers. Six of these trailing members are listed as in “Strong D” districts, meaning that pollsters gave them no chance of losing their races. Of the remaining 14 who are trailing perhaps 2 were considered likely to lose by the pollsters. So pollsters got 90 percent of these races wrong.

Polls also predicted Joe Biden comfortably winning the Presidential election, with a lead over Trump of 8%. But Biden is leading Trump by only a couple percentage points, making this a very close election.

Pollsters did not do a great job in the election. The media did a dreadful job in reporting the results, and erroneously predicting a lopsided Democratic victory.