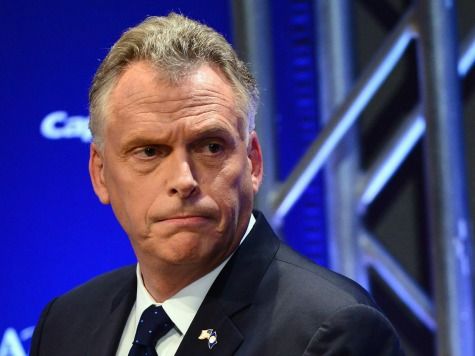 Governor McAuliffe has been hospitalized in Richmond due to a fall he suffered when riding horses last month in Africa. [read_more] The Governor was visiting a daughter in Zambia and on safari in Tanzania when the accident occurred. He broke seven ribs in the fall. Doctors thought the breaks would heal on their own but the Governor was experiencing an increase in fluid around his lungs today. He was admitted to Virginia Commonwealth University Medical Center in Richmond to remove the fluid.  He will spend the night in the hospital and should recover over the next few days.

More on the story here, and here.

Why wasn’t he in the office working or is he a part-time governor like Chairman Kaine was?

Honestly, that wouldn’t be my destination of choice for a getaway. I’d much rather see Australia and New Zealand.

Here is an addition for you. I was at the General Assembly today waiting to visit with Tag Greason and guess who’s Special Protection Detail was waiting outside of his room–Mrs. McAuliffe’s. Strange that her husband was in surgery today but she is in chatting with a Delegate.

Since McAuliffe left his wife when she was in labor to attend a fundraiser, I think we can safely assume their’s is a strange relationship.