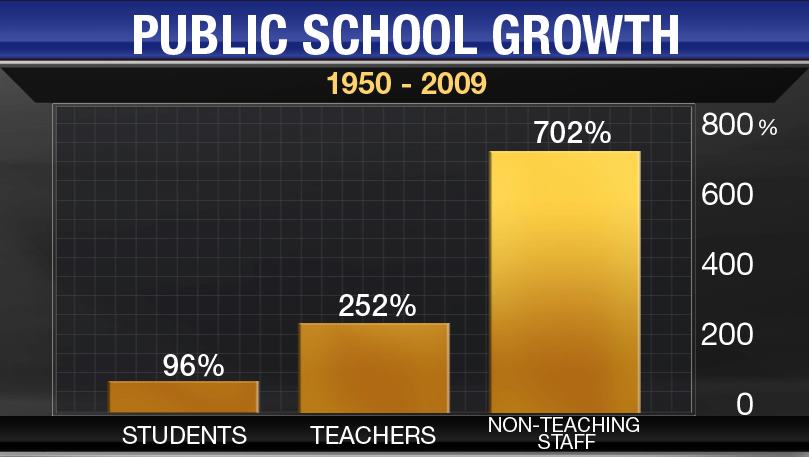 From John Stossel’s Facebook page, an interesting chart showing the growth in public schools from 1950 to 2009.[read_more] The number of students grew by 96% while the non-teaching staff grew by 702%!  This is why people object to the ever expanding public school’s budget! We’re not against teachers or increasing their salary, we object to the massive school bureaucracy!

ONE reason why there has been such a tremendous growth in public school “administrators” since 1950 is the rise of the welfare state and the resulting millions of “children at risk,” the vast majority of whom, I would wager, stem from broken or single-parent “families.” So, in effect, the Left, by concocting, maintaining, and intentionally growing the welfare state, has produced a never ending supply of “clients” in need of its “services.” Pretty simple, pretty diabolical, and we Republicans should occasionally stop our intra-party squabbles, and try to take the big picture on from 10,000 feet of the damage wreaked on our society by the Left. It ain’t pretty. And yet it is precisely these very architects and operators of the Welfare State whom we should be fighting, rather than each other.

I spoke to a woman recently who had a newborn child. She said daycare cost her $325 a week and that was a very good deal.

Now, if a single mother makes minimum wage, for 40 hrs. work she would earn $290 dollars before taxes. If she works overtime, daycare costs will skyrocket. Do the math.

Do you see the problem here? Take the money out of politics so immigration is contained, and CommunistChina is reeled in.

You cannot fix anything with huge amounts of money flowing to the politicians and media.

You talk about welfare? Small potatoes compared to what went to Wall St. during QE. Part of which came back to politicians PAC’s and campaigns. Part of which went to media.

I think it’s called “hush money” where I come from????? What is it called where you come from?

@ RR – the issue on this thread centers around the staggering growth of non-teaching staff. I offered but ONE reason. I know very well the stranglehold “the owners” have on our republic. The bankers lend out money to Republicans to support the defense establishment (and unnecessary wars in the Middle East), and to the Democrats to grow the welfare state. I read recently that every time an EBT card is used, one of the major banks, I believe Goldman Sachs, gets a piece of the action. However, welfare is very costly too. It produces generation after generation which must be warehoused in public or subsidized housing, and then usually in exceedingly expensive jails. But I agree with you. The owners have us over the coals, which is one of my Tea Party gripes with the establishment. Anyone who can afford to stroke a $10,000 check to the RNC is not likely to send his or her kids to failing public schools or live in a neighborhood being encroached by MS-13.

Ok, I guess we agree.

Regarding the staggering growth of non-teaching staff. It is called hiring someone to do your job. Just say a person is a principle. First off, the game is all about growth. He/she, the principle, first must hire someone to do their job. Someone who is not a threat to take that job.

And now that the principle has someone to do their job, he/she is now free to manage their personal life on our nickle. Or, do whatever on taxpayer time. Give orders to the non-threat #2.

Mean while, #2’s first order of business is convince the principle to hire someone to do the #2 job, so that #2 can do as the principe does. Then over a period of time you have #3, #4, etc..

It is a game. All get fat and lazy, along with a taxpayer paycheck. Their kids are usually worthless just like their parents.

But where else would these people work since we sent our better jobs to Communist China? As long a we have so many more people than good jobs, this cannot change. We export jobs, and import cheap labor. And then complain about those who have a taxpayer supported job, or check. Really, to be honest, these jobs are nothing more than Welfare.

Then the Republican’s refuse to increase minimum wage. Why should a single mother with a kid work? Look at the math above.

The first order should be for state and federal budgets to be frozen at current spending levels. It is not going to happen. Why? Because without increasing spending politicians have no power. They are not about to give up power. The situation is the same as the fall of the Roman Empire.

It cannot be stopped. It is destiny supported by history. History does repeat. Unless, of course, one repents!

While many local school divisions (most near large urban areas) have grown their school bureaucracy on their own – assuming to meet the demands and expectations of their residents – much of the growth in school bureaucracy is in-line with bureaucratic government growth at the federal, state and local level everywhere.

Furthermore the nature of how education is delivered adds additional demands on school budgets. Today technology is very important to a school division’s infrastructure. Again it takes people to ensure the delivery systems work and operate effectively so that teachers can properly do their jobs.