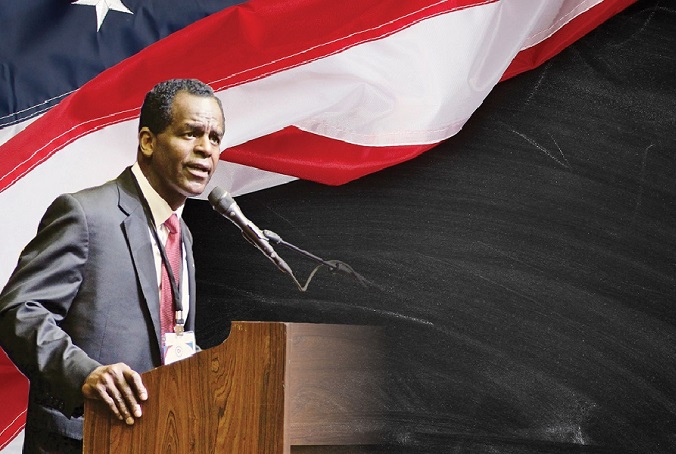 This is Commander Chuck Smith. Iâ€™m the America First, Black conservative, Marine vet and Navy JAG running for Attorney General of Virginia. Iâ€™m making history in Virginia by telling the truth and giving a voice to the people who arenâ€™t part of the Richmond elite that loses election after election.

Normally, I like attacking Democrats, holding them to account for destroying the country I love and I fought for.

But when my establishment RINO opponent starts spewing out easily disprovable lies about me, I feel like I just have to say something.

We have had enough of an Attorney General who lies like itâ€™s his job, Democrat Mark Herring. Heâ€™s a racist, a Communist, and I will attack him with everything Iâ€™ve got in this race.

Unfortunately, my RINO opponent has been spreading some lies about me, apparently hoping that my fundraising wouldnâ€™t be good enough to tell people the truth. But the jokeâ€™s on him- so letâ€™s tell some truth here.

This one is the easiest to disprove. I prosecuted many cases as a Navy JAG, and still have my Certificate to prove my role as a prosecutor.

I spent decades as a Navy JAG- and prosecuted more cases than my RINO opponent. He could spend 10 years as a prosecutor and still not have prosecuted as many cases as I have.

Again, very easy to disprove this one.

“However, following the Virginia Beach shooting, Delegate Jason Miyares of the 82nd District is proposing House Bill 4031, a Red Flag bill for the Commonwealth.“

I mean, come on. Any notion that this guy is anything but a gun-grabbing RINO is demonstrably untrue, and can be shown on the first page of a Google search. And for the record, I oppose gun control of any kind.

Lie #3: I let criminals out on the street.

This is puzzling. As a private practice attorney, I handle all kinds of cases. But if one of my clients was found not guilty, then guess what: HEâ€™S NOT A CRIMINAL!

It would also mean Iâ€™m pretty good at my job, as you would suspect of an attorney with 41 years of experience. And having an attorney who has been on both sides of the courtroom makes me a better prosecutor.

Lie #4: My RINO opponent set some kind of record in fundraising

In fact, as of today, I already have more donors than our last GOP nominee, including his general election run! It turns out, being bought off by a few dozen country club insiders really isnâ€™t a pathway to success.

Thereâ€™s a reason this guy scrubbed four years of social media posts before running for this office. Heâ€™s a vicious never-Trumper who supported Rubio in 2016. Even as recently as last year, he was still referring to President Trump as the â€œOrange Oneâ€.

Me? Iâ€™m an America First conservative who will sue Biden as much as I need to, so we can fight his Socialist agenda.

So why would my RINO opponent put out there SO MANY easily disprovable lies? Likely, because he sees the same thing we do in our internals: I am up big, he has no realistic pathway to victory, and tearing me down with lies is his only card left to play.

You know, I have been an attorney for 41 years. I spent decades as a Navy JAG, where I earned the rank of Commander. I also own my own law firm. I have been a leader of men most of my adult life, first as a Commander in the Navy, and then in private practice.

My RINO opponent doesnâ€™t even own his own law firm. He does no criminal cases, instead focusing on the world of real estate law. Before that, he was a lobbyist in Richmond. Those are NOT qualifications for being the top lawyer in the Commonwealth.

Bottom line is this: we have been saddled with another lying, liberal Richmond insider as Attorney General for the last 8 years. We wonâ€™t beat him by nominating another one.

How about this instead: letâ€™s nominate someone who tells the TRUTH, who is the most experienced candidate to ever seek this job, who has the most prosecutorial experience, who has led people, and who is a REAL CONSERVATIVE WHO WILL FIGHT FOR OUR VALUES?

Now is the time for YOU to help us MAKE HISTORY!