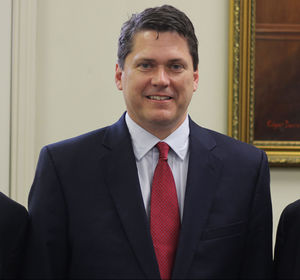 OP-Ed: The Haley Plan for a Winning RPV

Today, Vince Haley presented an overview of his plan for RPV. (*I’m a volunteer for Vince Haley and am supporting his run.)

The Haley Plan for a Winning Republican Party of Virginia

To: Delegates to the Republican Party of Virginia State Convention, April 29th and 30th

Our job is to elect Republicans at all levels and WIN the White House this November and then retake all the Statewide offices in 2017.

The following is a brief overview of a plan of attack for the Republican Party of Virginia heading into the November elections this year and the statewide election in 2017. A similar plan was offered up before but has sadly never been implemented. We must demonstrate a commitment to carrying out such a plan.Â  We must demonstrate to everyone that the Republican Party of Virginia is an organization worth their time and money.

At a minimum,Â my commitment to you is the following:

1 – The RPV will become a neutral arbiter in local races, leaving the choices for local races and SCC races to the people in the UnitsÂ and the Districts, not dictating to the grassroots, but serving them.

2 – We must ensure a vibrant and independent Republican Party of Virginia, beholden to the grassroots in Virginia, not any out of state source.

3 – We will put into place real business practices to run RPV. The RPV HQÂ will be a neat and organized building, all documents and data will be properly organized and filed. Also, while it may sound trivial, the professional appearance and attire for all staff will be required. It helps craft our image as a professional organization.Â

4 – We will create a fully functioning and capable finance team, not a catch as catch can operation. All corners of the Commonwealth must be involved.

A vibrant fundraising team and plan will pave the way for new and innovative grassroots programs.

A simple monthly RPV membership program will help fund the daily operations of the Party and pave the way for further expansion.

The Republican Party of Virginia needs an independent fundraising operation that relies upon Virginia stakeholders. It must make investments in relationship building that will garner tremendous results for the grassroots volunteers as well as our candidates for years to come. A professional and experienced Finance staffÂ is centrally important to achieving this goal.

The start is a professional and experienced Finance Director. The endgame includesÂ a Director of Development role and a Major Gifts staffer, who is needed to cultivate and maintain relationships with stakeholders.

Events such as the 2004 Warner Tax Hike and election of Mark Herring to the Attorney Generalâ€™s office in 2013 would not have occurred if RPV had the resources to deploy a statewide awareness and grassroots activation program in a moment’s notice. Mark Herring won by a very small percentage and Republicans would have the AGâ€™s office if RPV had a $500,000 reserve to be deployed at a moment’s notice. This would be employed by the Executive Committee to push back in close races and against bad General Assembly proposals. This is a long-term proposal.

5Â -Â I will commit to hiring a professional and experienced staff, including a full-time Political Director to assist the units and an engaged Communications Director.

6 – An engaged and full-time political operation is key to future success.

The start is an experienced political director whose role is to support the units and the district committees.

A longer term goal is toÂ establish a year-round professional operationÂ in all congressionalÂ districts across the Commonwealth.Â That operation will work towards growing and maintaining unit committees, providing constant support and opportunity for activists, and staying in place for each and every election cycle, not disappearing and having to be cobbled together after each election.

Coalitions are integral to the process. We must maximize the involvement of Â veterans, minorities, and youth in everything we do.

7 – A real and nimble communications operationÂ is also integral to future success of the Party.

An engaged and professional communications director with new media experienceÂ that works out of the RPV HQ is the first step.

RPV must increase its earned media presence and constantly make the case for conservative values.

Investment in new media must be made in order to reach beyond earned media communication.

The Chairman will craft a weekly Chairman’s update to send out to the RPV email list.

Time and money must be invested into the creation of a real data operation. The harvesting and utilization of data will be a key component of the operation, one that will further the goal of Republican election victories.

8 – This year, I will work to ensure all Victory offices are properly prepared for VICTORY in November and that VIRGINIANS play an integral part in the leadership and execution of the operation.

9 – I will work with experienced Unit Chairs in order toÂ prepare a new unit chairmanâ€™s manual and assist the units in performing their functions.

10 – The RPV will hold four statewide grassroots training workshops with local Republican unitsÂ to be held in June in order to be better prepared to win in November.

12Â -Â There will be a more concerted effortÂ with the Young Republican Federation to triple the number of Young Republicans Chapters in Virginia bringing young professionals into our Party.

These are minimum necessary steps to take in order to work towards a vibrant, healthy, and winning party. These goals are what a Vince Haley Chaired RPV will be working towards.

OP-Ed: The Haley Plan for a Winning RPV was last modified: April 27th, 2016 by Aaron Gulbransen

He ran, quit running, told the voters this, took down his website and then changed his mind.

If one wants to try to take out King Stork and Cardinal Findlay, do it with a real campaign, with a demonstrable record, real leadership, and something other than false fear, uncertainty, and doubt.

Now this is too little, too late, and just embarrasses fringe conservatives yet again.

Love the concept with the financial and staff support. You have my support. Keep me in mind when it is time to implement.

Is the plan to run up huge bills and then skip out on paying them? The RPV has has enough money issues to follow Haley’s past performance.

Who cares what kind of plan he has? He isn’t a candidate.

unless that SOB Whitbeck fails to create a safe space for him at the convention!

Looks good on paper. Go run a unit or district and prove yourself.

Yes, a cunning plan is called for!