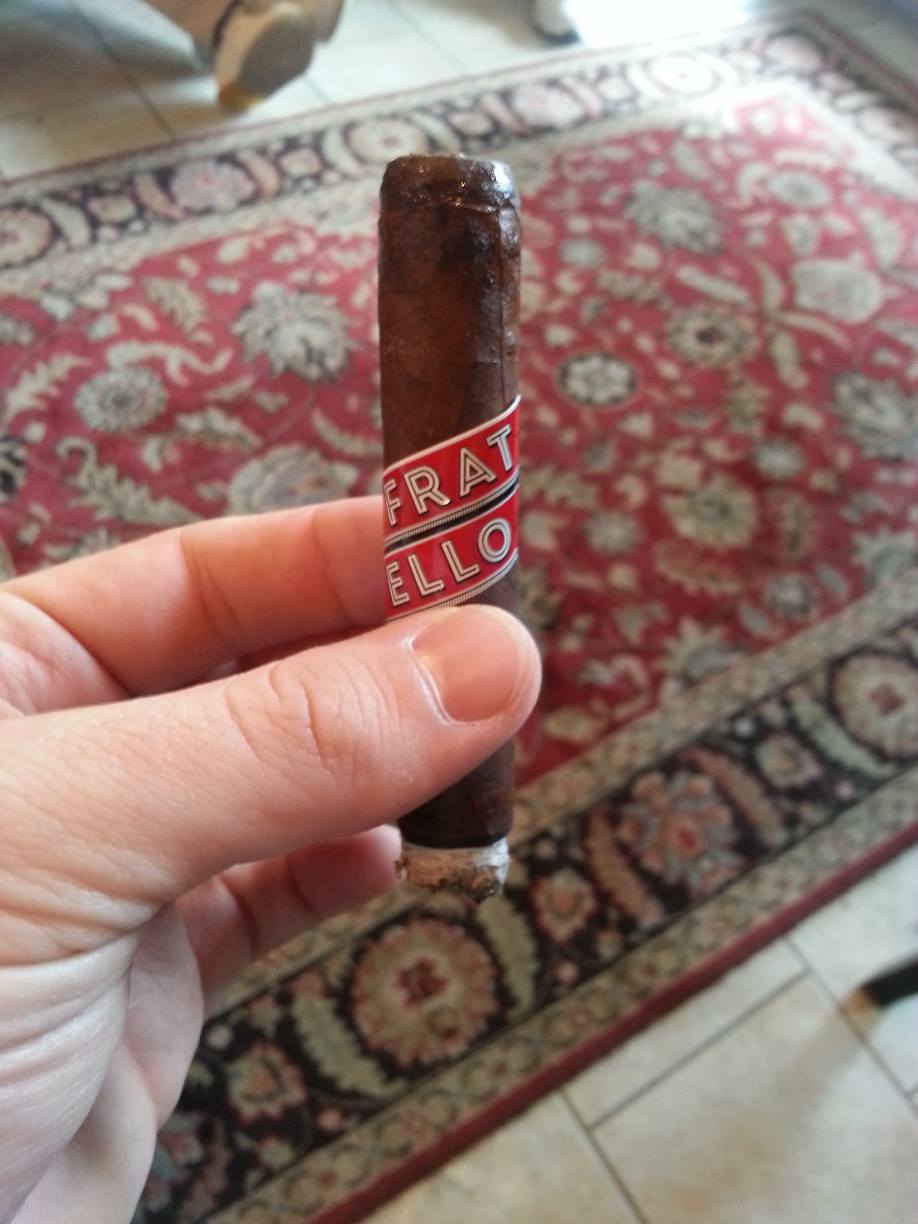 Hands Off Our Cigars!

To the federal government and all who would publicly or silently support the recent action by the FDA, we the cigar community of America have but one thing to say to you: Keep your hands off of our cigars!

The FDA recently issued a new set of regulations on the cigar industry that, in my opinion which is also shared by Rocky Patel, borders on prohibition. These regulations have the effect of putting 35,000 American jobs in jeopardy, putting all but a few cigar manufacturing companies out of business, limiting the choice of premium cigar customers, making it too expensive for many cigar lounges and shops to operate in order to comply, and taking all the fun and life out of the cigar community.

Or as a friend of mine who manages a local cigar shop in the Richmond area said, “This is essentially the death of the premium cigar industry as we currently know it. The action by the FDA is an incredibly gross overreach of a government agency that has no right intruding into our humidors. It is ironic that a government that tries to tout jobs creation is working to destroy over 30,000 jobs in the same breath.”

If you know nothing about the cigar community, take a look at a previous writing, a post entitled Smoke Filled Rooms.

Here’s the whole story: In 2009, Congress, through the Tobacco Control Act mistakenly gave the FDA the authority to regulate “other tobacco products” of which sadly, premium handmade cigars are considered part. We’re talking about Cohibas, Padrons, Tatuajes, Perdomos, et cetera, not the Philly Blunts or White Owls that are machine-made and generally are used for other purposes. The reason I say mistakenly is because the FDA just did what we can sadly come to expect from the Federal Government, a vast overreach of its mandate and a violation of stated goals. Of course, let’s also not forget that the Act in it of itself was superfluous, with the existence of the Alcohol, Tobacco, and Firearms Agency (ATF), but I digress.

The stated purpose of the TCA and further FDA regulation was to reduce overall underage tobacco sales/usage and the FDA announced in response to the TCA that they were considering various options to regulate the premium cigar industry. That doesn’t sound so bad, right? Stopping underage tobacco sales? No one’s against that, are they? Well, Lucy just took that football and went on her way laughing at poor Charlie Brown.

As far as I can tell, and mind you this is a 400-plug page document, the only new regulation that even concretely deals with the underage issue, is the “Establishing a federally mandated minimum of 18 years for the purchase of any tobacco product, including sales made online, and age verification made by photo ID.” Another thing to note is that sales of premium handmade cigars to underage users in brick and mortar shops is simply not a problem. The easy way to explain that fact is low traffic in stores compared to massive retail outlets like 7/11 that sell cigarettes and more attention by cigar shop employees. The premium (handmade) cigar industry has repeatedly demonstrated those facts contained in studies via presentations to Congress, the FDA, and even the White House. Obviously the other new regulations are not serving the stated aims, but are rather aimed at crippling a vibrant industry. On a related note, Cigar Rights of America, in a recent release, pointed out the FDA’s action, “in some respects treats premium cigars in harsher terms than that of cigarettes and other tobacco products.”

Possibly the worst of the new regulations is this: “The requirement of products released after February 15, 2007 to be verified by the FDA before going to market.” Jacob Grier of Reason Magazine sums up the rule pretty well. “Cigars that were on the market in 2007 will be allowed to remain for sale, but any cigars introduced since then will have to endure the same sort of regulatory hassles as Hestia tobacco. If they can’t prove they’re substantially equivalent to existing products—not just in their composition or their effects on smokers, but in their essentially unknowable potential health impacts on the population as a whole (Mind you, in the arbitrary eyes of the FDA, my editorial to the quote.)—then they will be ordered off the market.”

That compliance process described by Mr. Grier will have to be done with every single size, shape, and blend of cigar introduced after 2/15/07. Cigars introduced after that date comprise an overwhelming part of the current market. The regulatory costs, fees, and in-house cost of compliance has been estimated by industry experts to be somewhere in the range of $200,000-$250,000 per individual variation. These associated costs will put all but the top two or three largest cigar companies in danger of extinction. Those that survive will have to pass those costs onto the consumer and the price of the remaining cigars on the market after compliance will increase exponentially, destroying profits and demand, crippling the industry. That has the domino effect of making it simply not terribly profitable in most markets to operate a cigar shop or lounge.

After the FDA announced the intent to further regulate the premium cigar industry, there was an immediate effort of the fraternity of brick and mortar shops, small family businesses, and some bigger cigar companies,  to educate both the FDA, Congress and other agencies on the industry. There was a glimmer of hope for a bit, when the FDA prolonged the comment period and signaled that it might consider defining premium cigars at a set price of $10 and higher and then exempting those cigars from further regulation. That wouldn’t have been ideal either, considering that the average cigar sells for $6-$8 a stogie and sales would have dropped dramatically, but it still would have been a far better alternative to these current regulations. There’s Lucy again with the football and here we are staring at the abyss.

While the situation looks exceedingly dark now, there is still a glimmer of hope on the horizon. The admirable efforts made by groups like the IPCPR and Cigar Rights of America, were not without fruit. They did lead to HR662 and S441, bills that have garnered 163 and 21 sponsors/co-sponsors in the US House and US Senate respectively. Those bills would define and exempt premium cigars from the current regulations that the FDA has announced.

A statement issued by the IPCPR (International Premium Cigar & Pipe Retailers) describes the glimmer, although my editorial on that subject is that it means that we have to trust Congress, the same people who gave us the 1.1 Trillion Dollar Omnibus. Here’s hoping lightning strikes and they do something good for a change. Anyway, the statement reads as follows: “Fortunately, the industry’s legislative strategy continues to be implemented, including language recently adopted by the Appropriations Agricultural Subcommittee disallowing any funding of FDA regulation of premium cigars. Bills HR662 and S441, exempting premium cigars and pipe tobacco, continue to gain co-sponsors as we pursue a legislative solution to unneeded and harmful government intrusion.” (*An interesting thing to note is that Speaker Ryan had the opportunity to include the language of those two bills in the aforementioned Omnibus, but declined to do so for a petty reason.) To state the obvious, the passage of said bills does require a willing President to sign them, as I doubt a veto-proof majority will be attained. This year’s federal elections clearly matter if we want to change the outcome of FDA regulation.

Now to those of you who do not care about any of this, I’ve got a reason for you to care. This action by the FDA and bastardization of its Congressional mandate puts over 35,000 jobs at risk. Are you in favor of the purposeful destruction of an industry that employs over 35,000 Americans? Are you in favor of running up additional federal deficits by the loss of those tax dollars? I thought not. Even if you absolutely despise the smell of smoke and cigars in general, any fiscal conservative would care about this issue.

That all being said, any candidate who wants my support in 2016 or 2017 and the support of the bulk of my fellow cigar patriots, needs to come out and condemn the FDA overreach on premium cigars. This is needed from the 2016 Federal candidates and the 2017 state candidates. These candidates must to vow to use their bully pulpit to condemn those actions, fight to reverse them, and vote to do something if they have the power. We will be a forgotten constituency no more. 2017 Virginia AG candidates, an amicus brief when the suits are filed would be nice.

Consider this, there are thousands of people like me in Virginia, and many have never attended a convention before. Well, next year that might change. 2017 candidates please take notice.

This is an all defenders of freedom hands on deck moment, not just an “Oh, it’s a federal problem and we’ll just whine about it privately and not do anything publicly” moment. It takes an all of the above approach to fight federal overreach. True conservatives and anyone with common sense would join this cause and defend 35,000 American jobs and individual liberty.

Call your Congressman and your Senator. Call the White House public comment line. Call all the candidates for public office this year. Tweet, email, and text them all. Tell them that you want them to share this message with the FDA:

Keep your hands off of our cigars!

Hands Off Our Cigars! was last modified: May 7th, 2016 by Aaron Gulbransen

Join with us in the Savetheleaf.org March on the capital August 8

I guess a stopped clock really IS right two times a day.

Yes, Aaron — this really is David. I am a Catholic, after all, and I stand by my position, no matter what Shaun Kenney or Becky Stoeckel (who’s Catholic, too, btw) might think.