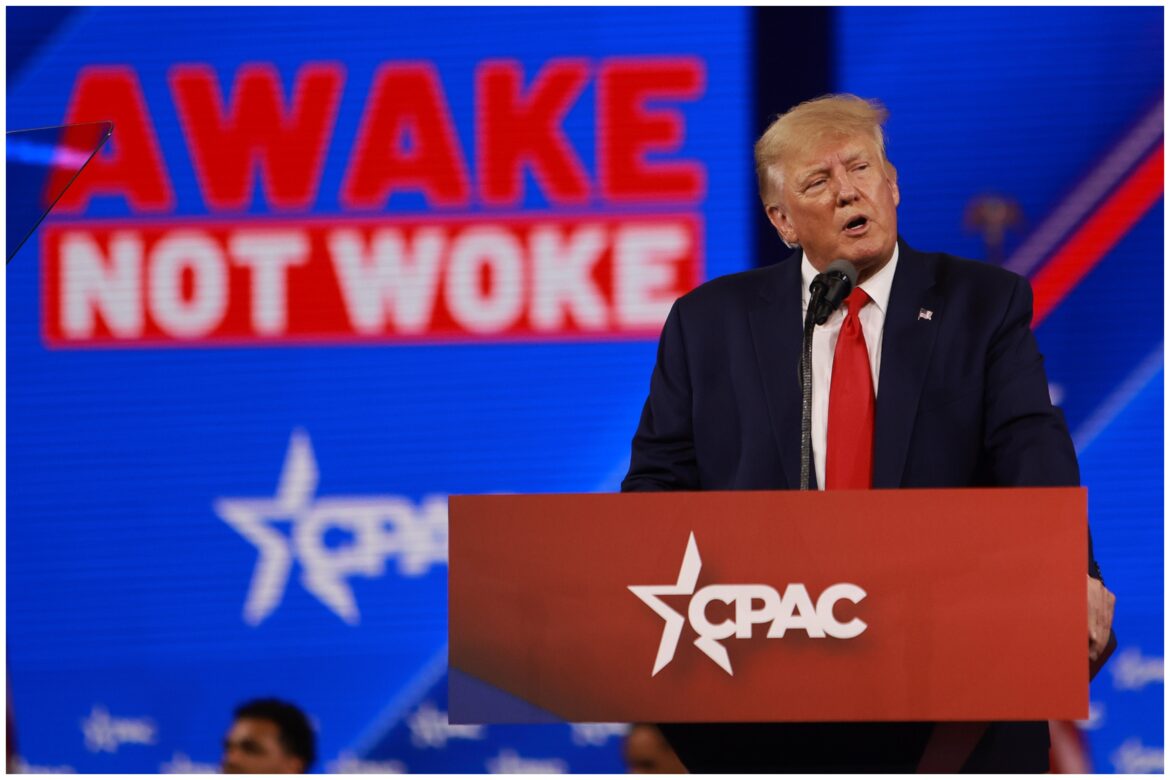 As if Democrats don’t have enough to complain about, former President Donald Trump will headline the Conservative Political Action Conference (CPAC) which is scheduled to take place March 1-4 in Washington, DC.

“We are honored to have President Trump speak at the CPAC conference,” CPAC spokesperson Megan Powers Small said in a statement posted to Twitter by Politico Correspondent Meridith McGraw. “President Trump has been a featured speaker at CPAC for over 10 years, sharing his love for our great country and the American people.

“He has always understood the importance of CPAC as a major communications platform to reach millions of Americans and showcase his successful America First policy agenda that made our country more secure and prosperous, the statement added.”

Trump was in New Hampshire Saturday speaking at what some billed as the kick-off to his 2024 Presidential campaign.

The short version is: A flop.

The longer version: Instead of the thousands that he drew in 2016, the “crowd” was a few dozen, under 100. The anti-Trump crowd left early, telling reporters they did not need to waste their time protesting a has-been loser. About 1/3 of the crowd left halfway through his “speech — which was nothing but a re-hash of his grievances, lies, and name-calling.

Almost forgotten was an earlier “campaign appearance” in SC where he drew a crowd estimated at 200 — that’s right — two HUNDRED, not the thousands from yesteryear. And he delivered the same poor-poor-pitiful-me soliloquy as in NH.

Very interesting. Thanks for posting it. I liked Trump, thought he was a very good President but at this point I just want him gone. It sounds like I’m not alone.

The man who tried to overthrow the US constitution is running for president again when he should be hung for treason. I do not see a win here for Republicans if POS Trump is the best Republicans can come up with. Somebody needs to indict this SOB so maybe we can get a Republican to run.

This guy is worse than Biden and Pelosi, if that is possible. What a POS. Pelosi fundraised with two impeachments and an a year long investigation of Trump. Nothing but a fundraiser.

They are all nothing but thieves, crooks, and liars. 537 of the finest criminals America has to offer.

Don’t you know he’s got a “R” behind his name so he’s untouchable?
Space laser girl?
Underage girl guy?
“Gym” pervert?
Stripper? (Don’t mind that one actually 😉
Dude that can’t tell the truth about anything but you put him on the formicating ethics committee ffs 🤦‍♂️

The list goes on and on. And yeah yeah, I know “what about?”. Here’s an idea: grow the hell up and hold people accountable regardless of the letter behind their name. And maybe for once, start in your own damn house to build a little credibility. I’m sure the response will be “yer just a librul that wants to destroy ‘murica”. Can’t wait for Ye/Santos (R) ‘24 to hit the streets.

Pence’s lawyers report that, while going through files at his home, they discovered a number of classified document. The attorneys (1) notified FBI and DOJ, requesting assistance; (2) notified Pence.

To Virginia Republicans;
We didn’t support Mitt Romney so if you’re thinking Youngkin is your man think again.
What legislation has Youngkin called for to end the illegal employment in Virginia that lures illegal aliens here? None, that is a continuing problem.
Glenn Youngkin is nothing but a Mitt Romney in a sweater vest.
Governor Abbott needs to send a few hundred busses of illegal aliens to Richmond because those Virginia Republicans love them more than Virginia itself.

Right on! Send a couple bus loads to the 1st District for Congressman Wittman while he is at it!

Funny you should mention busloads of “illegal immigrants” and Rep. Rob Wittman (R, VA-01) in the same sentence. You may not know this, so, here goes.

Even after redistricting, Wittman’s 1st District is largely contiguous with Delegate Margaret Bevans Ransone’s old 99th House of Delegates district and her new 67th HOD district. In addition to serving in the House of Delegates, Ransone is Wittman’s anointed successor in Congress. In 2024 or 2026, Wittman will announce that he is leaving Congress (to go to work as a lobbyist for Ingalls Shipbuilding, Boeing, and other defense contractors – although he will not say that part). He will make his announcement with Margaret beaming by his side while he introduces her as his successor.

So what does this have to do with “illegal immigrants”? A lot – you see, Ransone is the daughter of the Bevans Oyster Company family who are multi-millionaires as a result of their seafood operations in Westmoreland County and on the Mississippi Gulf Coast.

Instead Bevans Oyster Company relies on labor from local blacks and imported Hispanics. That is, until the local blacks got out of their place and starting asking for better wages and working conditions at which point Bevans switched to almost 100% Hispanic labor. Several times each year, 12- and 15-passenger vans from Texas and Louisiana converge on Westmoreland, Richmond, and Northumberland counties where Bevans owns old houses and has their operations. The Hispanic shuckers and pickers are jammed into the houses, have no transportation except to/from work.

Back in the early days of the COVID pandemic, over half the Hispanic workers tested positive for COVID and a number of them had symptoms. The local health departments reported to the State Dept of Health as well as reporting to local EMS, whose personnel needed to know about the risk in case they were called to locations with sick Hispanic workers.

This news stewed around Westmoreland, Richmond, and Northumberland counties for a few days then, POOF!!, — like magic, everyone fell silent, nothing more was said, including VDH and local health departments.

Must be nice to have friends in Richmond.

Now let’s not forget one of the many failures of
Hillary Clinton, google;
ISIS pool party 🇱🇾 Libya.
Democrats have a pattern of turning their backs on America & Americans for profit 💰💰💰

And Kamala OMG, stop passing out equitable traitor education
“We must do what we are doing and that day is every day”
Yup all the Democrats sell out America, don’t forget McAuliffe giving China Millions of Virginia tax revenue that could have been used for a school in Appomattox.

A continuous pattern of theft, fraud and treason by Democrats.

“google; ISIS pool party”: against my better judgement, I did. Apparently in May, 2019: “Isis Muretech killed it at the pool party last weekend for White Party Palm Springs”. Now I’m the last person here to start questioning what other people do on their own time. See, I’m the conservative that still believes in you do you as long as it doesn’t hurt anyone else. So you go ahead and do your thing w Ms Muretech but admittedly, I’m not sure what she has to do w Hillary Clinton or the topic at hand.

Well apparently you don’t have a clue as to what Secretary of State Clinton did in Libya after she allowed the Benghazi Embassy to be burned with State Department employees killed.
Clinton’s War.
Then again you might say;
“What does it matter now”
Crawl under your rock!

Never fear — Gym Jordan will get to the bottom of it!! Just like he got to the bottoms of the guys on his college wrestling teams when he was their coach!!

How much did Hillary pay to abandon the Tripoli Embassy?
I wouldn’t expect you to have concern for the American deaths in Benghazi being that you Democrats are not concerned with the fentanyl deaths in America.
Democrats only are concerned with death when it comes to killing babies or a Congressional Bill that has Billions that you can funnel off for profit.

Y’all are a touchy bunch and shouldn’t be because look at the corruption you stand on.

During the GWBush administration, there were 13 attacks on US embassies and 60 people died. Where’s the investigation(s)?

There was a time when Bush led us into a war that many didn’t come home from.
These Globalists Republicans must be left to themselves.

Recently here at TBE there definition of a Dr has come into comments for a couple but one thing for sure is that Democrats have a continuous pattern of being the;
Dr’s of Death ☠️

I do have a nominal clue regarding Benghazi. I was simply doing exactly as you requested: Google Isis pool party. 🤷‍♂️ The results have zero to do w Mrs Clinton. You may want to clear your search history and try again 😉

trump is an anti-American asshole

So just how many documents did Joe Biden steal and sell to China while a Senator. And to steal Top Secret documents and take them to his political business (Penn Center), who was hustling them to Ukraine. You know that you fellow Communist China Joe 🇨🇳 was tired off supporting his family for 30 years and it was time to be paid back.
The morons from the Traitor Joe Administration claims that his garage was locked but Hunter lived on the inside.
Joe Biden at the very least must be charged with racketeering for making Hunter give back half of his business deal proceeds from China.

Joe Biden is allowing hundreds of thousands of Americans to be killed with Narco Terrorist Smuggled Fentanyl that is trafficked through our Southern Border.

Traitor Joe is causing the cost of gas is on the rise once again to keep the Energy War on Americans profitable for his grifter family.

You have to realize that Martin is anti-American. His purpose is to destroy America and institute the great reset also known as global fascism.

You have to realize that Martin is anti-American. His purpose is to destroy America and institute the great reset also known as global fascism. His primary and consistent comment is about six words long and adds literally nothing to the conversation.

Just how many documents did Mike Pence steal?

Appears that you do not pay attention to the real news: Mike Pence’s lawyers discovered a trove of classified documents while reviewing files at his home. The lawyers immediately (1) notified FBI and DOJ, requested assistance; (2) notified Pence; (3) turned documents over to FBI.

Distraction. We have no idea what is anything was found. With Biden, we know he was trading our secrets for money and Hunter was his bag man..

You know no such thing