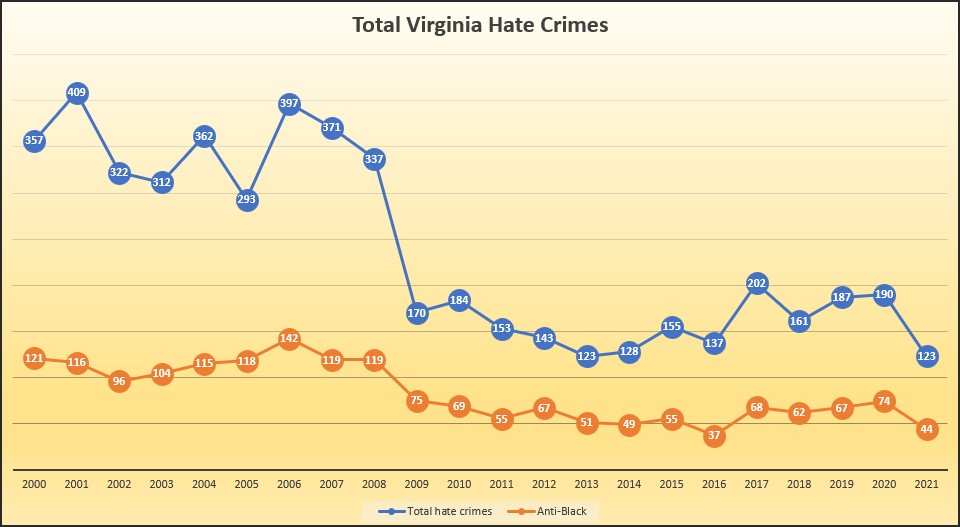 Hey, Where Did All the White Supremacists Go?

If you believe the political/pundit class, Glenn Youngkin rode the path to the governorship on the back of a White backlash against his predecessor’s efforts to rectify the last 400 years of wrongs against minorities. All the while last year, the experts warned of the looming threat of White supremacists against Blacks, Jews and Asians, gays and other persecuted groups.

A funny thing happened, though. It turns out that the year in which Virginians elected Youngkin governor saw a dramatic decline in the incidence of hate crimes.

According to the 2021 Crime in Virginia report issued this morning, police departments across the Commonwealth reported only 123 hate crimes, down 35% from the previous year. The number of hate crimes against Blacks fell to 44, the second lowest number since the numbers were first published in the current format in 2000. The number against Jews fell to four, the lowest ever recorded. And the number against Asians — remember how the media and former Attorney General Mark Herring hyped a supposed wave of anti-Asian hate crimes? — fell to three, also the lowest number ever.

Some wave of White supremacy.

So, if you were one of the nearly 1.8 million Blacks residing in Virginia, you had less than a one-in-44,000 chance of being a victim of a hate crime odious enough to be reported to the police. If you’re one of the roughly 100,000 Jews living in the state, your odds are less than one in 25,000.

Not one of those hate crimes was a homicide, by the way. The largest category of hate crimes (43) fell under the classification of “simple assault” — a misdemeanor in which someone acts in a threatening manner or attempts (and fails) to strike someone. In other words, no physical contact takes place. There were only 11 instances of “aggravated assault,” a felony, in which the victim may not even be hurt.

The number of hate crimes is so meager — 123 out of the 362,000 offenses reported to police departments, or almost one of three thousand cases — that it’s a non-factor in analyzing crime in Virginia. But because the decline does not feed the social-justice narratives of the dominant media, you’re not likely to hear much about it. Luckily for you, you read Bacon’s Rebellion. We would have reported the numbers however they turned out.

Hey, Where Did All the White Supremacists Go? was last modified: June 30th, 2022 by Guest Contributor James Bacon

According to the FBI, the demographic most likely to commit any violent crime is a black male, hateful or otherwise, and by a large margin. Fact. I wish the Supreme Court would ban any designation like “hate” attached to any crime or speech. Why should a crime based on hate, if that’s the case, be considered worse than the same crime committed without a hateful motive? Getting killed in a robbery or getting killed because someone hates the victim leaves the victim just as dead. Just another Democrat ploy to use the law against everyone outside their mental gulag. Let’s go SCOTUS, time to fix this artificial category of crime and/or speech. Free speech means we can say ANYTHING we want ANYWHERE we want to ANYONE we want ANYTIME we want without fear of prosecution. Or we really don’t have “free” speech.

Strange, no data on hate crimes against white folk. I guess the democrats have decided that can’t happen.

According to the FBI, the demographic most likely to perpetrate a hate crime is a Black male. That doesn’t fit the Democrat narrative at all, but those donkeys lie through their teeth anyway. Democrats need a boogeyman to scare someone to the polls. If Democrats dealt with truth, they’d have to pay enormous reparations for the deeds of the Democratic Party of the past.