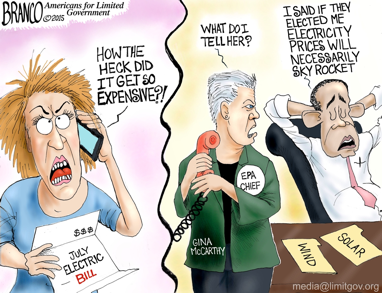 How are working Americans supposed to pay for a carbon tax?

In the State of the Union Address last month, President Obama renewed his call for a carbon tax. He called to “change the way we manage our oil and coal resources, so that they better reflect the costs they impose on taxpayers, and the earth.” The President’s proposals are purportedly advanced in the name of the people, but what do the people think?

About a month ago, a poll was conducted by YouGov to ask the world about their concern about climate change. Nine percent of Americans expressed they were concerned. Another poll conducted in November by Fox News found the number to be at three percent.

What do you suppose matters the most? According to the most recent Gallup poll, 39 percent were concerned about the economy. In the same poll, while those concerned about the environment came to an underwhelming 1 percent, so-called climate change specifically didn’t even appear on the chart. Why are we pretending?

Polling is not truly exact, but Americans care more about paying bills than carbon emissions. We have negative indicators about economic growth all around us, so a carbon tax wouldn’t come out of the large increase of economic output tomorrow, but out of the stagnant output of today, when the lack of recovery is already keeping the cupboards bare. Working people who are already on the edge can’t afford that.

Wages remain flat, according to data compiled by the U.S. Census Bureau, and haven’t seen significant growth in over a decade. It is a cruel irony indeed that the same people who claim the mantle of protecting the poor can pass a regressive tax onto them for their most basic needs. Are Washington, D.C. politicians really going to make it more expensive to buy groceries, heat homes and engage in productive activity? This is yet another way to steal money from working Americans without calling it a tax. Consumers end up paying more, but don’t know why.

Think about that. An economy where so much has been spent on creating jobs and growth, the proponents of the carbon tax would make it harder still to grow out of the doldrums that have defined this decade. What are they thinking?

In the meantime, friends of the Obama administration like venture socialist Elon Musk, who supports a carbon tax, add to their competitive advantage by increasing the costs of competitors’ fuel sources to subsidize their business models. The implication is that the average family making around $50,000 a year is paying more to lower the prices of the people who buy $100,000 cars like the Tesla Model S.

Rick Manning, President of Americans for Limited Government inveighed against the carbon tax, joining with 21 other free market groups on Feb. 24, saying,

Americans for Limited Government is proud to join free market and limited government leaders from across the country in opposing the imposition of any carbon tax on the U.S. economy, whether by law or regulatory fiat. Taxing carbon-based energy increases the cost of doing business in the U.S. by increasing the cost of electricity, ships jobs overseas and punishes the American people with higher consumer costs. Low energy costs for the future is the key to America emerging from Obama’s economic malaise and reviving our job producing manufacturing sector.

Manning urged the House to adopt House Concurrent Resolution 89 to express its sense that it Congress opposes a carbon tax.

That is a good start, but more needs to be done. The carbon tax is already being implemented via regulatory fiat via the Environmental Protection Agency’s Carbon Endangerment Finding defining carbon dioxide as a harmful pollutant under the Clean Air Act, as well as its new and existing power plant rules, the costs of which get passed on to consumers, necessarily making electricity more expensive, just as then-candidate for president Barack Obama promised they would back in 2008.

Creating more hidden taxes that increase the burden on struggling Americans to fix things beyond government control, is truly emblematic, and is yet one more reason why voters are angry with Washington.

Congress alone has the power to stop this insidious theft of working America.

There are two immediate solutions: First, firing a warning shot to the Obama administration that this tax will never pass Congress. Second, passing legislation that rolls back some of these regulations. Rep. Ken Buck’s (R-Colo.) Article I supplemental is one such next logical step to do just that, as it specifically defunds the new and existing power plant rules.

Every American has been raised with the idea that Democrats are the party of the little guy. Instead, the party under Obama is apparently more concerned with fundamentally transforming America than it is with helping the poor and Americans who work for a living — the ones who truly pay for his onerous and growing carbon tax.

Dustin Howard is a contributing editor to Americans for Limited Government.

How are working Americans supposed to pay for a carbon tax? was last modified: February 26th, 2016 by Guest Contributor Dustin Howard

Dustin Howard is a contributing editor to Americans for Limited Government. He hails from the Missouri Ozarks and has held numerous positions inside of Republican politics, including as Executive Director of a northern Virginia Republican party and Staffer in county government. Before that, Howard worked for his family’s small business, where he learned his appreciation for hard work and America’s entrepreneurial spirit.

To: Ask Black and Minchew

These are Randy’s budget notes:

Another area of the budget that is important to our 10th District is the proposed $2.43 Billion bond package funding for Virginia’s state parks, as well as appropriations for the Virginia Battlefield Preservation and Virginia Land Conservation Funds. I am still hopeful that some of these bond funds will be allocated to capital improvements and to purchase additional lands for a new state park in far northwestern Loudoun County.

Not pro-property rights at all.

In the Commonwealth of VA and Loudoun, they apparently siphon and redistribute taxes to elite special interest groups. The Waterford Foundation, and groups like them, are known far and wide for stomping on property rights. As of 2014, they had over $6,000,000 is assets. This is business as usual, but nevertheless, IMO disgusting. Check out loudountaxpayer.org

Delegate Minchew and Senator Black will be offering a $200,000 budget adjustment item tomorrow to secure funding for the Waterford Foundation to cover the cost of lost revenue resulting from the cancellation of the fair in October 2015. Apparently, there is a restriction in the general assembly on granting funding to nonprofits so Del. Minchew and Senator Black would like to direct this funding to Loudoun County with the intent of disbursement to the Waterford Foundation.

Can you advise us as to the most appropriate county mechanism in which to accomplish this revenue transfer?