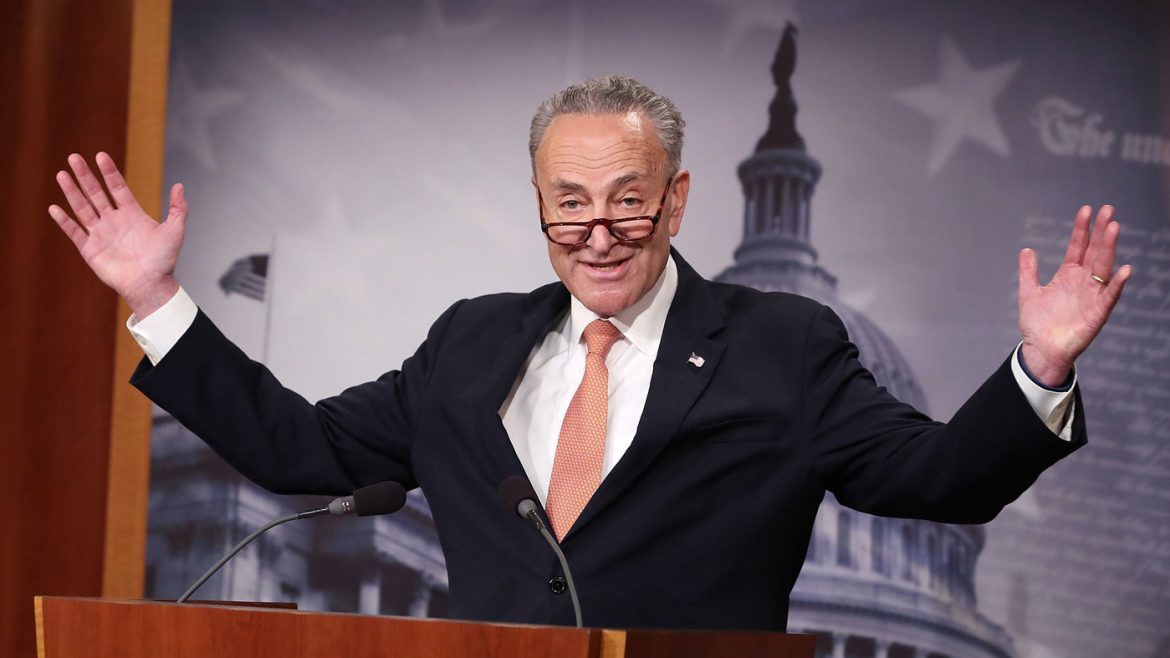 Senate Minority Leader Chuck Schumer (D-NY), the one with hair that looks like an old hairbrush, gave an emotional speech during which he expressed his “genuine and sincere” feelings and obligatory outrage over President Trump’s comments given to calm a nearly panicked nation.

He threw this fit after hearing about Bob Woodward’s new book “Rage,” which has done what his books usually do…spew half truths, misleading comments and to express his version of what he wants the reader to believe Trump said. They are always geared to garner publicity. Nothing new.

“Chucky” Schumer isn’t the only one either. There are the usual Trump haters who have feigned being equally upset! They all cry, “LIAR!” It seems to be their favorite word these days, now that they have worn out a disproven  “racist.” They should know it well…they are very experienced!

Biden is forcefully crying out, “It’s irresponsible.” “He hasn’t done a thing to fight Corona Virus!.” He’s said it three times now, so his memory must be improving, but where has he had his head? Don’t answer…I know it’s impossible.

The President, while offering his comforting words to the nation, was implementing one of the most extensive and impressive actions in recent history to combat the situation…including the first medical mobilization since WWII.

How stupid do they think we are? President Trump did what any good leader would have done,,,that’s why it was upsetting to them.

They’ve not seen a good leader in decades. Trump’s handling of the COVID virus has been exemplary.

Recall FDR’s memorable speech after the attack on Pearl Harbor with the now classic words, “The only thing we have to fear…is fear itself.” That was exactly the same thing. Did they tear their hair out then as well?

The whole bunch of “Swamp Critters” is losing it. How could anyone in their right mind vote for any of them? Biden, Harris, Sanders, Schumer, Pelosi, Schiff, and his “Schiff-sniffing” lackey Swalwell…and the short fat one who waddles…Jerry Nadler …from New York who thinks riots are a myth. They are all losers and “throw-away” politicians and candidates. What lunacy!

Has any one of them done anything even worth mentioning? Now, they are criticizing and finding fault when they wouldn’t have a clue as to what to do. If they weren’t afraid of their own shadow, they might have been able to help…but they chose not to. If it weren’t so sad, it would be funny!

These people don’t love America…they don’t even like it. That’s why they are trying to change and destroy it! They are permitting hoodlums to burn it up, tear it down and turn it into something that they hope they can “control.” They claim to love children and at the same time support the murder of millions of babies. Put that on the scale of logic!

Let’s look at some of their actions:

But let the President give the American people a pep talk or an encouraging word…”HOW AWFUL!” There’s something he isn’t telling us! “Saints preserve us…it’s the end of the world!”

I’ll  bet he knows a lot more than that! It’s called, “Classified, Secret and Top Secret!” He’s not telling us that either…that’s his job, and he does it well. Just like he does everything else. He can’t be bought or controlled by anyone!

That’s why they hate Trump…far more than they like anything…except themselves and power!

How Stupid Do They Think We Are? was last modified: September 15th, 2020 by Guest Contributor Tom Northam