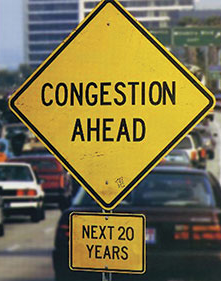 In 2013 Speaker Bill Howell and Governor Bob McDonnell forced through the General Assembly the biggest tax hike in the history of the Commonwealth, a whopping $1.13 BILLION in tax increases. [read_more]Northern Virginia and Hampton Roads saw their sales tax go up by 20%. Â Across the Commonwealth it now costs more to sell your house, and gas taxes were increased across the state. Â While only 23 cents of every dollar of gas tax goes to roads. (I constantly wonder, just what DOES Richmond do with our money because it sure isn’t spent on roads and it can’t all be spent on the Metro for less than 1% of the population to ride. Can it?)

We were told the transportation tax bill would help to solve our transportation problems, particularly in Northern Virginia. Has anyone noticed a decrease in the traffic in Northern Virginia? Â Anywhere in Virginia? Â Commuting times in NOVA are longer than ever and we still can’t travel to Richmond on weekends due to traffic on I-95. Â Politicians LOVE the Metro and couldn’t wait to expand the Silver Line to Dulles. The Silver Line to Dulles is now open and traffic on route 7 and the Dulles Toll Road is worse than ever. Metro is a sinkhole for our tax money and offers no relief from traffic congestion.

So what is happening to all that money that Virginia is taking in from our large tax increases since it doesn’t seem to be applied to roads? Â While a large chunk is going to fund the subway in Fairfax and Loudoun but where is the rest of it going?

RevenuesÂ in Virginia continue to rise, more than 10% in April 2015 over the same month last year. Â OurÂ tax money continues to pile up on Richmond. There is no chance that Speaker Howell and the Governor will return our money to us, or use it to expand roads like I-95 or I-66. So what will they find to spend this windfall on? Â My money, and your’s, is most likely to be spent on Medicaid expansion, McAuliffe’s promise to Virginia during his election. Look for it happen after July 1st when Howell and McAuliffe pretend to be shocked, shocked I tell you, at all this ‘extra money’ in Richmond. By law McAuliffe cannot spend the money on Medicaid Expansion prior to July 1st. However there is nothing to stop him after that date because the General Assembly didn’t put restrictions on spending for medicaid expansion after July 1st, 2015. So watch for the phony surprise coming from Richmond when the Governor and Speaker Howell find this ‘unexpected’ windfall and celebrate the expansion of Medicaid in Virginia.

[…] Since it’s the weekend with little happening politically (always subject to rapid changes) I found this amusing list of things to avoid doing and saying in Virginia.Â Â The first thing to avoid is any road ending in the numbers 95 on weekends, or mornings, or evenings, pretty much anytime. (Again, how’s that transportation tax increase working for you?)Â  […]

Reply
Howâ€™s That Massive Transportation Tax Hike Working for You? - The Virginia Free Citizen May 14, 2015 at 4:40 pm