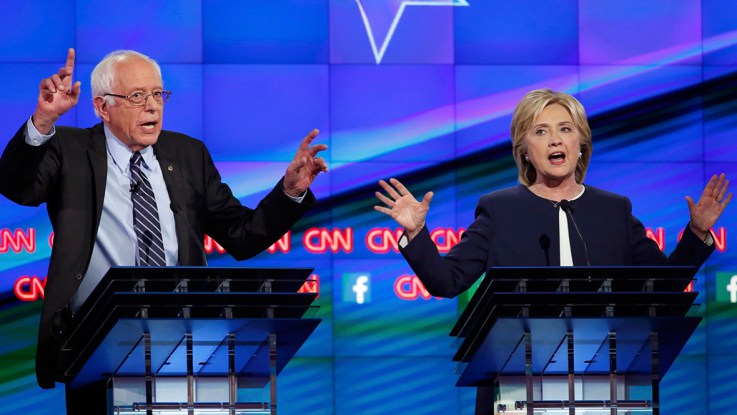 I am Absolutely Loving Bernie and Hillary was last modified: February 5th, 2016 by Steven Brodie Tucker

You guys are under estimating the Clinton party machine’s ability to overcome anything to get elected. That whole email thing is going away, thanks to Paul Ryan and an FBI busy typing up their resignation paperwork. The wall street money Clinton received was simply “What they were paying.” Bill hasn’t strayed from Hill lately. And they are promising to bring the white house china back. So there is nothing left to stand in their way on the path to the White House family home. Hill can be the Prez while Bill acts as virtual VP and all will be right as rain. By the end of their reign, Senator Chelsea will take over the family business and estate. So you may as well get used to it.

You are one pessimistic and depressing dude

I guess it’s too much GOP BS that made me that way. Or it could have been those books I read written by elitist a holes starting decades ago that advocate a more modern world order that puts us peons in a different caste than most Americans could imagine.

No effing way. Evidently, you have no idea the danger into which Hilary Clinton has placed this country. You have no idea what Top Secret HCS means, and you have no idea the great lengths which the hundreds of thousands of us in the Intelligence Community must go to in order to safeguard classified information. She is not walking from this one. This ain’t White Water. This is near treason, even if her Kosha Nostra Media Complex tries to ignore it – it cannot.

Well yeah, I do know a bit of something about classified information. Clinton is on a different level to us average people who would have already been in jail. Ryan is already telling the House to back down. And there are stories going around that the FBI has been handcuffed. If she doesn’t walk, then all the good and I’ll reevaluate my voting plans. But I’m looking at the end result, not wishful thinking.

Steven Tucker is right on the money. Since 1992 the Democrats have been blessed with two incredibly charismatic and effective candidates in Bill Clinton and Barack Obama. But not this time. Hillary does not look the part, or sound the part, or even act the part. She is totally unlikeable, and given her persona who could blame Bill for his wandering eyes and arms? And when it comes to Bernie there is no way an old New York Jewish socialist such as Bernie Sanders is going to get blacks and Latinos to vote for him in the margins necessary to ensure victory in key states such as OH, VA, FL, and perhaps even PA and MI. The Dems are in deep doo doo and they know it.

Yea, you said half of it. Who are the Republicans blessed with this time?

Marco Rubio is better than Hillary – in policy, likeability, and honesty. Not that Rubio is perfect, but he does have an attractive family and a better life story.

I will not vote for him due to his views on amnesty for illegal’s. Not a chance. No way dude.

Get anywhere near amnesty and I run the other way. Disqualified.

Rubio and the rest are too far to the right to be considered by many swing voters. Social issues alone will push people away let alone their desire to grow the size of the govt through increased military spending. On top of that, they threaten to revoke obamacare without a replacement first, leaving so many without coverage. If they could simply come up with a full plan before they promise to cut everyone off. And don’t forget the promises of growing the military budget which will blow apart any hope of reduced spending, smaller govt and less debt.

We will never again encounter such a delicious situation as with the Democrat candidates. All of us should pledge to enthusiastically promote our own Republican choice until such time that there is a consensus candidate, then all fall in behind him in order to regain the white house… and save the Supreme Court.

True, we may salvage the Supreme Court but nothing will save us from the burgeoning interest on the debt and the coming fiscal collapse.

What makes you think a GOP POTUS will save the Supreme Court?