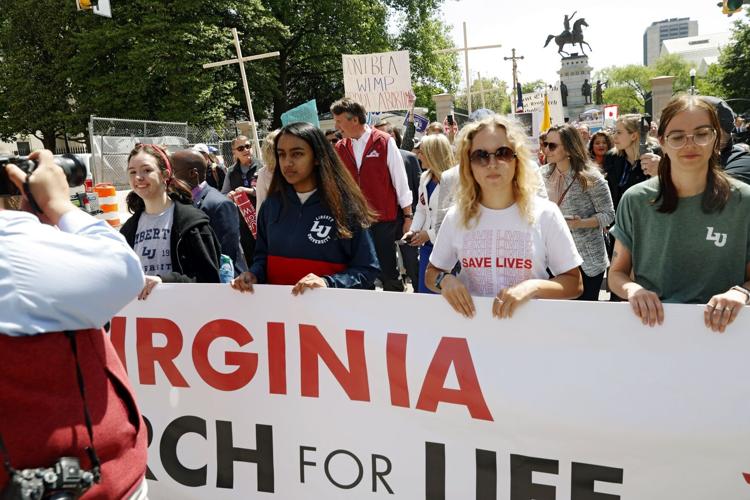 If SCOTUS overturns Roe what happens in Virginia politics?

If no conservative Justice on the Supreme Court caves to the left’s pressure to not overturn Roe, what will happen in Virginia?

First, we know Governor Youngkin is pro-life and will not sign a bill to codify the “right” to an abortion in the commonwealth.

Currently, Republicans control the House of Delegates and the Democrats control the state Senate. That could all change next year when every member of the General Assembly is up for re-election. The left will turn out to vote in high numbers because their leaders and the MSM will scare them right into the voting booth this year and next. Already the left is saying absurd things, including after Roe is overturned they will lose rights like gay marriage, even interracial marriage, and interstate commerce! It will get much worse as the year progresses. Overturning Roe will be a gift to Democrats running for office.

Virginia has three Democrat Congressional Representatives who are women, Elaine Luria in the 2nd district, Abigail Spanberger in the 7th and Jennifer Wexton in the 10th. All three voted last year to codify abortion into federal law. Republicans were poised to pick up all three of those districts because of voters’ strong disapproval of Biden among the voters. With the striking down of Roe, the Democrat base in Virginia will be energized to turn out and vote to support these three women.

“I was born into a world where women were no longer dying from back-alley abortions. As were my three daughters. This leaked draft opinion indicates that after decades, that may all soon change.

“We voted to codify Roe in the House, and the Senate needs to take it up for a vote.”

In the redrawn 10th district Rep. Jennifer Wexton lost a large part of her Fairfax voters and gained two red counties, Rappahannock and Fauquier. Republicans in the 10th district vote in a party canvass on May 21. There are so many good Republican candidates in the 10th vying to run against Wexton. We had a very good chance of beating her. Now, it’s much less likely Republicans will prevail as the Democrats scare their voters into the voting booth.

“We must protect women, we must fight back against attempts to control a woman’s ability to make decisions about her own body”.

“I am in utter disbelief that the sacred confidentiality of the Supreme Court would be violated in this manner. Sadly, this leak was done in order to cause chaos and to put pressure on justices and elected officials. It’s premature to speculate on what the Supreme Court’s decision will be; however, we learned from listening to Virginians over the last year that we have much common ground on this issue. I am pro-life, and I have been very clear about that since the day I launched my campaign. While we wait for the final June decision, we will be focused on lowering taxes for Virginians, funding education and law enforcement because we need to get a budget passed.”

Former Democrat Speaker of the House of Delegates tweeted:

“Virginia is only 1 state Senate seat away from becoming the next state to ban abortion. We must take back our House majority and expand our majority in the Senate to protect the rights of women across the Commonwealth.”

November’s election was to be a referendum on the terrible job Joe Biden is doing as President. Now it appears it will be all about abortion because it is the left’s biggest issue, always. They will die on that sword.

More on how the abortion decision will affect Virginia here and here.

If SCOTUS overturns Roe what happens in Virginia politics? was last modified: May 4th, 2022 by Jeanine Martin

Hey Johnny and Erica… Here is an inconvenient little tidbit about your President:
According to the NY Slimes, Biden proposed an amendment to the Constitution in 1982 to overturn Roe v Wade and let the states decide. Umm… like this decision proposes?

is that so? I surely thank you for that……..especially the links to bck up your always word

Look it up yourself. The NY Slimes Article was entitled When Joe Biden Voted to Let States Overturn Roe V Wade. You need to put that in your search by the way because Google doesn’t produce it under any other search…

We have President Trump to thank for his ruling because three of the pro-life Justices were appointed by him. It would be nice if the Chief Justice joined the majority but as a George W. Bush appointee, he’s a squish.

Looks like John is getting upset. See his comment to Ken. He needs a time out Jeanine. Especially on this issue. This is an emotional one and he is gonna get all emotional over this one.
I had a discussion with David over who voted with the Democrats. Roberts is usually the one.
Also I had the same thought. The GOP got something it had supposedly been chasing for five decades…
The Never Trumpers probably don’t really care about the moral issue of abortion. I will have to take a peek at Bearing Grift to see how they are reacting… AND… nothing. Not one story as of this minute. What do you make of that. Maybe they don’t publish their swill that often… see if they have a story about the end of Roe tomorrow..

Nope, nothing about Roe on BD. Establishment Republicans would prefer not to discuss the abortion issue.

Kenney, the only person at that crappy Lincoln Project blog, remotely “conservative” finally wrote something. I doubt that vacuous “editor” of that baloney blog or the rest of the clowns will say anything… will the guy who voted for Clinton because he likes wars but won’t go himself say anything? Let’s see.

Liberals subsist on emotion; conservatives on fact and reason, and as the facts show, some 54% (according to a Kaiser Health News story) of abortions are through drugs like Mifeprex, and would not be covered by this supposed ruling (we’ve yet to see the real thing; just a draft opinion written by Sam Alito in February). Thats because medicines come under the Constitution’s interstate commerce protections. States can license doctors and regulate some facets of medical practice, like surgical abortions; but not drugs. Only 13 states, Jeanine noted in a previous posting, have instituted restrictions on abortions — all largely rural states. The “Blue”States, controlled by Democrat legislatures, are not going to restrict abortion. Therefore, if a woman really wants a surgical abortion to kill her baby, she can go to NY< NJ or any number of states. The days of "back alley abortions" as the histrionic Spanberger notes above are over with. That being said,I believe this document was deliberately leaked by some Leftist activist-minded clerk to one of the 3 liberals to get Ukraine and high gas prices out of the news and attempt to give Democrats an edge on an issue — as a majority of voters, notably females, support abortion rights. THe Demcorats as shown with the histrionics and drama over Kavanaugh and Amy Coney Barrett, George Floyd and guns, are all about pulling at voter heartstrings to stay in power. This is pure Machiavelliansism and hope this backfires and they get slapped even harder by the voters this fall. So much for their concens about the "future of democracy"

“Liberals subsist on emotion; conservatives on fact and reason,” Get bent

Knock off the insults and try to debate with some semblance of rational thought. Last warning.

Ahhh… the uneven hand of TBE censorship is raised…. now where else have I seen insults cast on TBE… 🤷‍♂️… oh yeah…. up about three comments…

Leak may be the wrong word. Delivered, may be more appropriate. I consider some of the SCOTUS Judges to be far right or left, no doubt in my mind. To think that SCOTUS does not debate with key members of elected government behind the scenes I think is a fantasy. Some low level secretary or janitor may take the hit, if anyone ever does, but, it’s much bigger that that. The Crats are underwater big time. They are pulling all the stops to remain in power. The Republicans are trying to screw up their possible gains everyday.

Republicans refuse to put anybody but a Catholic on SCOTUS. What did you people expect? In my opinion The Federalist Society where Republicans get their SCOTUS nominees is nothing but part of the Vatican. And, the “potted plant” in the White House, Nancy Pelosi, Tim Kaine, all Catholics, are they really pro abortion when the cameras are turned off? I have my doubts.

One problem is that the same Catholics on SCOTUS who will vote to end Roe also are the ones keeping the border open to anybody. Those same politicians in Congress who are pro-life certainly do not mind taking legalized bribes from K St. and sending jobs to China and other slave labor markets. Congress has been selling out this country for at least 40 years.

“Therefore, if a woman really wants a surgical abortion to kill her baby, she can go to NY< NJ or any number of states.”

And if the state where this woman resides makes it a crime to seek an out-of-state abortion, Ken…?? See Missouri bill for example….

You comfortable with where this is going, Ken…?? Do you think it would not happen in Virginia…??

Yes, the Dems will play this card and should. It will likely improve their turnout numbers as well.

Actually, I don’t this helps Democrats at all. I think the Left is going to go full-on nutter and remind the general population how completely unbalanced they are. Let them riot. Rational people will dislike Democrats even more than they currently do. Plus, support for abortion has been fading for years. I think this leak will just remind the average voter that Democrats are indeed crazy.

An inconvenient fact, David. Any faction of the Democratic coalition in and of itself is only about 30-40% of the population. But if an issue comes along that unifies them (and this is potentially just such an issue) they easily exceed 50% as a unified bloc – oh, and don’t forget those fickle independents…

What percentage of the population lists abortion as their number one issue, ahead of inflation, exploding prices at the pump and the grocery store, the border wall, education, foreign affairs, and the overall job Biden is doing in the White House? How many people will let abortion dictate their vote when they’re paying $7 a gallon for gas and $9 a pound for bacon, while illegals flood into our country? (Hint, it’s far less than 5% on either side of the issue.) It’s way down on the list of things the average voter cares about.

I think you will see that that is not true

It does not have to be their number one issues for it to be an effective GOTV issue, Jeanine.