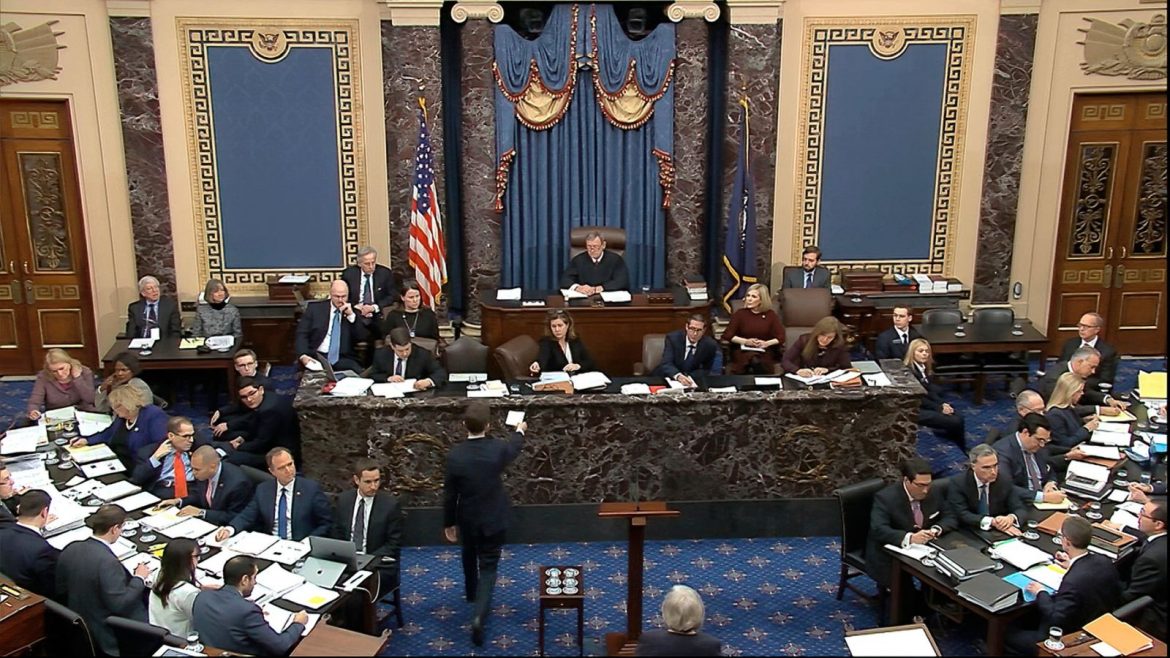 It looks like international trickster Zolatar – a.k.a. “Kilroy,” as political wags are now calling him – is at it again. Political analysts now believe he was centrally involved in the months-long impeachment and trial of President Donald Trump, and also was behind Speaker of the House Nancy Pelosi’s dramatic, speech-shredding performance at the close of the president’s State of the Union address on February 4th.

Leaks from the Democratic National Committee indicate that their investigators have found that a team of Zolatar/Kilroy-operatives actually seized control, early on, of the entire impeachment process in the House of Representatives. Evidently, Zolatar’s key first move was replacing House Intelligence Committee Chairman Adam Schiff and Judiciary Committee Chairman Jerrold Nadler with look-alike surrogates. Evidently both chairmen allowed imposters to impersonate them during the impeachment proceedings, in return for “honoraria” of $3 million each. Insiders report that both Congressmen are now ensconced on an undisclosed South Pacific Island where they have adopted native dress and lifestyle. An informed source says, “Life is pretty good down there. They might never come back.”

Meanwhile, the surrogate Schiff and Nadler have engineered impeachment proceedings in the House that became so controversial and partisan that they attracted international attention. Between secret sessions of the House Intelligence Committee – conducted behind closed doors – the surrogate Schiff held impromptu press conferences where he framed hearsay “evidence” against the president in lurid terms. His statements included a bizarre “parody” of a telephone conversation between Mr. Trump and Ukraine President Zelensky in which Schiff performed a credible impression of Edward G. Robinson’s gangster-persona in Little Caesar and Key Largo:

‘I want dirt on Biden, and no slipups. See? Don’t call me until you have it. And there’ll be no money until you do. Got it? I’m not foolin’ around here…’ (Schiff’s parody included Mr. Trump’s threat to put a horse’s head in Zelensky’s bed if he didn’t come through, but networks cut that item from the news-clip.)

Schiff delivered this parody on national TV, despite the fact that the Trump administration had released the actual transcript of the call. It clearly included no request for “dirt” on Joe and Hunter Biden, and no threat to withhold financial aid.

The false parody evoked roars of protest from Republicans, plus a weeks-long media feeding-frenzy in which the true text of the conversation went mostly unmentioned, while the parody was endlessly replayed. Polls suggested that much of the public accepted the parody as fact. Experienced Democrat solons, though – aghast at the blatant public deception – knew that when the truth eventually emerged, many voters who had been taken in would be offended.

But Schiff was on a roll and could not be stopped. Media commentators and pundits egged him on by heaping lavish praise on his forensic skills and bravura performance. He was: “masterful” and “highly effective;” “in full command of his material;” “a real showman.”  “Reporters hung on every word,” they said. “He’s Democrats’ Don Corleone. Trump has no one to match him.”

Some commentators were puzzled, however. “I don’t remember Adam Schiff having showmanship chops like that,” said one. “He’s changed. What happened to him?” Others thought he must be on a “mega-upper.” And a cadre of political gurus speculated on whether Mr. Schiff might be laying groundwork for a presidential run against Mr. Trump, as a surprise candidate produced by a brokered convention. Or was he angling for a new career as a reality-show impresario? The questions hung in the air.

Media-attention also centered on the House Judiciary Committee, chaired by the surrogate Nadler. There the impeachment-blitz “came up craps” (as they say in Vegas). A New York Post editorial of December 10, 2019 summarized what went wrong:

“Democrats have been confused on just what Trump did wrong. All their early talk of a ‘quid pro quo’ in Trump’s July phone call with Ukraine’s president turned (after some polling) into charges of ‘bribery’ and ‘extortion.’ Yet all those terms are absent from Nadler’s articles.

“He offers one on ‘abuse of power,’ which covers all the efforts to get Ukraine to investigate: (1) 2016 meddling; and (2) the company that hired Hunter Biden. But it doesn’t explain how Trump ‘compromised the national security of the United States and undermined the integrity of the United States democratic process,’ or solicited interference in the 2020 election.

“Schiff contends Trump wanted ‘sham investigations’ from Ukraine. But the inquiry produced not a single person or document suggesting Trump wanted Ukraine to frame his potential 2020 rival. Nadler’s other article is for ‘obstruction of Congress,’ centering on the White House’s refusal to cooperate with House hearings, ordering various officials not to testify.

“Yet the legislative and executive branches fight all the time over compelling such testimony: It’s up to the judicial branch to resolve each battle — but House Democrats declined to go to court this time. That’s likely why Nadler didn’t even go for an ‘obstruction of justice’ article — one of the main counts in both the Nixon and Clinton impeachments…”

In the councils of the mighty, dark suspicions lingered regarding the impeachment’s controversial form and flimsy substance. DNC leaders knew the impeachment was devolving into a fiasco. Was it possible that they were watching the wily Zolatar – their old nemesis – turn a sure political winner into a royal mess, as he had done before? DNC officials quietly launched the investigation into who was really running this runaway show, hoping to finally nab the legendary trickster.

After proclaiming an urgent need to move speedily on the impeachment trial, House Speaker Nancy Pelosi waited 33 days before sending the two articles to the Senate. During that time she insisted that the Senate must allow for witness-testimony. Democratic senators and media applied maximum pressure on that point, but Senate Majority Leader Mitch McConnell refused Speaker Pelosi’s demands. Mr. McConnell said Madame Speaker could ‘wait until kingdom-come if she wished,’ but he wouldn’t budge. Ultimately, Mrs. Pelosi forwarded the articles without obtaining her desired changes to the Senate’s rules.

The Senate’s allowed the House prosecution team 24 hours to present their case, followed by the same time for Mr. Trump’s defense. After several days of speechifying by the prosecution team – largely a reprise of statements formerly given by Schiff and Nadler – the president’s team presented their defense without using their entire 24 hours. Following those presentations, senators submitted questions addressed to either the prosecution or defense, and team-members from the queried sides answered. No time-limit on answers was prescribed, but Senate Leader McConnell urged “brevity.” That phase lasted 16 hours.

The question-and-answer phase finished with a burlesque-moment, as both Schiff and Nadler tried to reach the microphone to answer the final question. Calling “Jerry! Jerry!” Schiff tried to catch the speeding Nadler, who was “…moving faster that anyone had ever seen him move,” said one reporter. But Schiff lost the race and had to sit down. It was a fitting conclusion to the entire proceeding.

Finally, on February 5th, the entire Senate voted on whether to convict or acquit on each of the two articles. As expected, Mr. Trump was acquitted on both articles on party-line votes, except that Senator Mitt Romney (R-UT) crossed over to vote for conviction on the “abuse of power” article.

Mr. Trump’s State of the Union speech – delivered to both Houses of Congress on the evening before the Senate’s votes on the articles – was a high-energy celebration of the country’s economic resurgence, renewed confidence, and military success. Republicans clapped and cheered repeatedly, while glum-faced Democrats sat on their hands.

Throughout the SOTU speech, TV cameras frequently caught Speaker Pelosi – seated behind Mr. Trump – shuffling a pile of papers and making odd faces. At the conclusion of the speech she dramatically tore up those papers, which turned out to be an official transcript of Mr. Trump’s speech. One commentator said it was the craziest thing to happen in the House chamber since a 19th-century representative hurled a spittoon at the Speaker’s dais, during a heated debate on reseating representatives from the Confederate states. (There was no information on whether the spittoon was empty.)

Reporters and commentators made much sport of Mrs. Pelosi’s speech-ripping. (“Nancy the Ripper.”) Those with Democrat-leanings praised her unconventional act of protest, while Republican supporters wondered if her elevator had stopped going all the way to the top. “Is this what passes for political leadership now,” asked a senior Republican.

But some Democrats took a more serious view. Insiders report that DNC leaders immediately ordered their investigators – who had discovered the replacement of Representatives Schiff and Nadler – to find out what was going on with Mrs. Pelosi. DNC officials declined to say whether they thought the speaker had “flipped,” but the blogosphere was awash with speculation in that vein.

During the weekend following the SOTU and Mr. Trump’s acquittal, DNC investigators submitted a confidential report – since leaked by our confidential informant – which indicated that Mrs. Pelosi was not present at Mr. Trump’s speech, but had also been replaced by a surrogate. Investigators believe her replacement was actually Zolatar himself – dressed in drag and wearing a Pelosi-mask. Forensic experts believe that the facial contortions seen during the speech were due to an imperfect fit of the mask.

After a press conference in which “she” denounced Mr. Trump’s speech as “a pack of lies,” the surrogate Pelosi disappeared without a trace. Then, late on Sunday evening, February 9th, a delegation from the San Francisco homeless “community” returned the actual Mrs. Pelosi to city authorities. She had been “camping out” with them for several days, but they were sending her back. “She just wouldn’t stop talking,” said a spokesman. “We couldn’t get any sleep, and she was driving us crazy.”

‘This has gone far enough. We’re gonna get that guy (Zolatar) if it’s the last thing we ever do. I’ve already warned [Ukraine President] Zelensky that the money stops until they find him…”

Later, Mr. Biden denied saying anything to anybody about money. ‘Who’s Zelensky?’ he asked.

At this writing, Zolatar remains at large…

“Kilroy was here” was first spotted on Confederate earthworks outside Petersburg, VA, in 1864. It has also been seen on the outside of the 45th floor of a skyscraper in Koala Lampur. Investigators have no idea how the latter inscription was made.