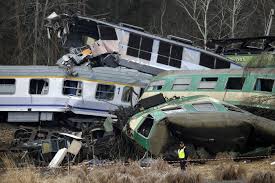 The first phase of Â Metro’s Silver Line is estimated to be $226 million over budget and the second phase is now estimated to be 13 months behind schedule.Â Â  That means the Silver line will not be arriving in Loudoun until 2020 and Loudoun will be on the hook for 4% of all costs and costs overruns.[read_more] If an escalator breaks in PG County, we chip in our 4% to fix it. Â If Metro needs a new fleet of rail cars, or track in SE Washington Loudoun pays 4%. Â Let’s hope the new Loudoun Board of Supervisors gets us out of this train wreck deal Â with MWAA.

When the board of supervisors agreed to fund the expansion of metro into Loudoun county the board told us that an expanding commercial development would pay for metro without having to raised taxes on citizens to pay for it. Now that we know that model is broken, it’s time for our board to taken action and stop this train wreck.

It Is Not Too Late for Loudoun to Get Out of their Bad Deal on the Silver Line was last modified: August 9th, 2015 by Jeanine Martin

I will add that it is better to drop it now since Loudoun has made little actual financial contributions so far.
Arlington dropped their trolley car system. Larry Hogan threatens to stop Purple Line expansion. There is good regional precedent to drop this bad idea now before we get in too deep.

Loudoun should exit the Dulles Rail Consortium, and here is why…

When Loudoun opted-in to the agreement, most arguments for it supported economic growth. That was a fair enough argument. Loudoun put in place a Service District (i.e. tax district) that insulated the County property tax payers from costs by shifting the additional tax burden to the landowners around the Metro station.

However, I would add that opting-in was a bad idea. Had Loudoun refused, MWAA would have run the Metro to Dulles and a bit beyond and Loudoun wouldn’t have paid a dime for Metro. That was the best course of action, but our Board chose otherwise saying that Metro was going to be a economic bonanza.

But MWAA has stabbed Loudoun in the back. We opted in July 2012. Later that year, in the 2012 FAA Reauthorization Act MWAA sought–and got—newfound development authority to allow them to develop Dulles airport property. Here is the kicker—such development will be exempt from most local and state taxes. Therefore, all that money Loudoun thought it would make around the rail stations just vaporized.
Thus, we have a Metro that doesn’t relieve congestion and isn’t going to generate tax revenues that will greater than what Loudoun will have to pay to MWAA/WMATA. Further, the operation funding agreement with WMATA has been held in secret and the public has not been allowed to view it.
Loudoun should send a letter to MWAA stating our disgust with them and leave the consortium. They will sue us. So what. If MWAA is going to steal the bulk of our tax revenue, there is no need to contribute to the system.
And there is so much more wrong with MWAA and WMATA that I could write several more essay-length posts on them.

OK, Jeanine. I am one screen name and I ride the Silver Line every day to my job to McLean. As a result of this vital Metro addition in July 2014, my quality of life improved dramatically. In short, I no longer have to drive the 40 miles from Stafford to McLean at 5AM. Rather, I can slug from Stafford to Rosslyn at 6:30, and hop aboard the Silver Line to McLean, and arrive at work by 8AM. Projects are going to have overruns and underestimates. It happens. But what is the alternative for those of us who still work and who need mass transit from our homes to our places of business?

Stafford isn’t Loudoun. In Loudoun we have express buses that are much faster than the subway and MUCH cheaper. They also allow passengers to bring coffee and food on board and there’s free wi-fi and bathrooms. Loudoun doesn’t need to be on the hook forever to pay for the boondoggle that is metro.
Currently the Silver Line from Reston to downtown takes an hour and 15 minutes. Add another 15 to 20 for a trip from Loudoun. No one wants to spend 3+ hours a day on the metro with no restrooms, no food, coffee, or wi-fi, and spend a small fortune to ride the metro on top of spending large amounts to park. The Silver Line should stop at the airport. Build a multi story parking lot at the airport and Loudoun taxpayers are off the Metro funding hook.

Jeanine, I have heard from everyone that your merry band is against Metro because it brings minorities and liberals into the county.

Speaking for myself that’s a crazy thought. Making a 100 or more year infrastructure decision on short term politics is nuts.

not necessarily off the hook, Jeanine. This is one of the Tax Pig fantasies. The votes go back years before this board (even including Eugene, who also voted against the first buses as I recall–they were a boondoggle too), on a variety of aspects of the plan.
We have fairly few buses as it is, and one of the arguments (also from those wondrous Tax Pig days before he was elected to the legislature) before the most Metro recent vote was that the buses would be eliminated (what few we have, and anyway, didn’t someone say THEY were a boondoggle?).
In fact, I think that was one of the subjects of those fake flyers handed out at commuter lots, with the county seal attached, that pretended to be official news from the county transportation department.

So I asked earlier — are you proposing they withdraw from Metro? Renegotiate the terms? Is that possible?

Those buses do not run at hours that suit non-government professionals. They run from 4-something am in the morning to 7-something, which doesn’t work at all for parents who have to get kids off to school first. And they return between 3-something and 5 or 6-something in the afternoon. Anyone above a secretary in the private sector has to be able to work until 7:00 pm or later sometimes. So professionals are forced to take the overpriced Greenway instead. I know I’m not the only one who feels if I’m going to pay $6+ each way I’d rather be able to read and email and such on the train instead of deal with the stresses of traffic.

PS It is absolute BS that Silver Line from Reston to downtown is 75 minutes. It’s 40-50 minutes depending on where you’re going downtown. I’ve taken it from the Reston station downtown many times. Also, there’s this cool little invention called 4G which means pretty much everyone CAN use their mobile devices on the Metro. Geesh. You can critique Metro after you ever use it yourself instead of just whining that you can’t drink your coffee and pee when you’re on it.

Seriously, does the author ever write substantive articles? Everything I have seen is just a sentence or two of brain farts with a bunch of hyperlinks to some other articles. Is this what journalism has come to??

See above, the same applies to you. One screen name only please.

Please stick with one screen name. Thank you.

Wow, why didn’t I think of that? The Bull Elephant wouldn’t want to turn out Glenn Reynolds, with the biggest political blog in the US, and no ‘substantive articles’! http://pjmedia.com/instapundit/ Wouldn’t want to suffer his fate. lol

This is a blog, not the NY Times.

It will be very interesting to see how Charlie King is told to handle this topic.

His leeches are working on it but Charles has an excellent mind of his own so feel free to ask him what he thinks about Metro. He is very well versed in the subject and has been for years.

You aren’t fooling anyone. One name only, please.

I think you are losing it a little Jeanine, no offense. Every comment you don’t like in this thread has been tagged by you as being from multi-screen names.

Now I am not sure of the other two, but I know I only use one name. So either you are freaking out a bit, you aren’t checking the facts, or you don’t understand technology.

My post contained a valid question. King has surrounded himself with the merry band that is now attacking Chapman. I think that is a problem for the LCRC. I will ask King his views on Metro. That will be very telling.

It’s not you dear. You aren’t close enough to politics in Loudoun county to be called anything.

My apologies for spitting my La Croix Sparkling Water on that shot at Crankypants. If someone thinks Barbara is not clued into all things political in Loudoun they haven’t been here very long.

Turret, I’m just old Mrs. Babs Crankypants. If my dogs didn’t talk back to me, why nobody would, darlin 😀

I knew it wasn’t me. And anyway, you call me lots of OTHER things–lol.

No, I was wondering if there was dissension among The Plastics, since the group involved in this year’s challenge includes YOU.

Jeanine, I know you always used to tell Jeff Wolinski that you were the Queen of Mean, but he claimed another really ruled.

Wouldn’t it be sad for you if it turned out you really WEREN’T Regina George, but have actually been Gretchen Wieners the whole time? Bummer.

Yes, please do. Charlie has been very open about his views on Metro since Loudoun signed on to this bad deal.

What do you mean by “gets us out of this train wreck deal with MWAA”? Do you mean halt the project altogether? Renegotiate the terms?

She’s interpreting the para she quoted (rather, those who fed it to her) as meaning that all the Board has to do is not approve the appropriation each fiscal year (that, in the rest of the agreement they, well, AGREE to do) and voila! the nasty choo choo goes away.
No, then Loudoun gets dragged into court.
Which is the fiscally conservative argument.
The all-time best political reporter in Loudoun county (since I’ve been here. Dusty came after and he was good, and Erica who succeeded him was good as well) once commented on a Loudouner subject to filing suits over government financial points.
They went on and on, and while they did make some small points, they did not prevail in court and things they were suing about happened anyway.
What this reporter said to me after one epic crusade was “I wonder how many dollars they’re prepared to waste to make a point about a dime?”
Yes, yes, I know, it’s an order of magnitude greater than a dime.
But if we just decide “say no to the choo choo!” after entering into years of agreements that said yes, we’re going to be budgeting some hefty legal fees, and THAT’S undone previous boards before–“what the heck are they planning to do that they need so much for lawyers?” was popular about ten years B.J.E (Before Jeanine’s Era).