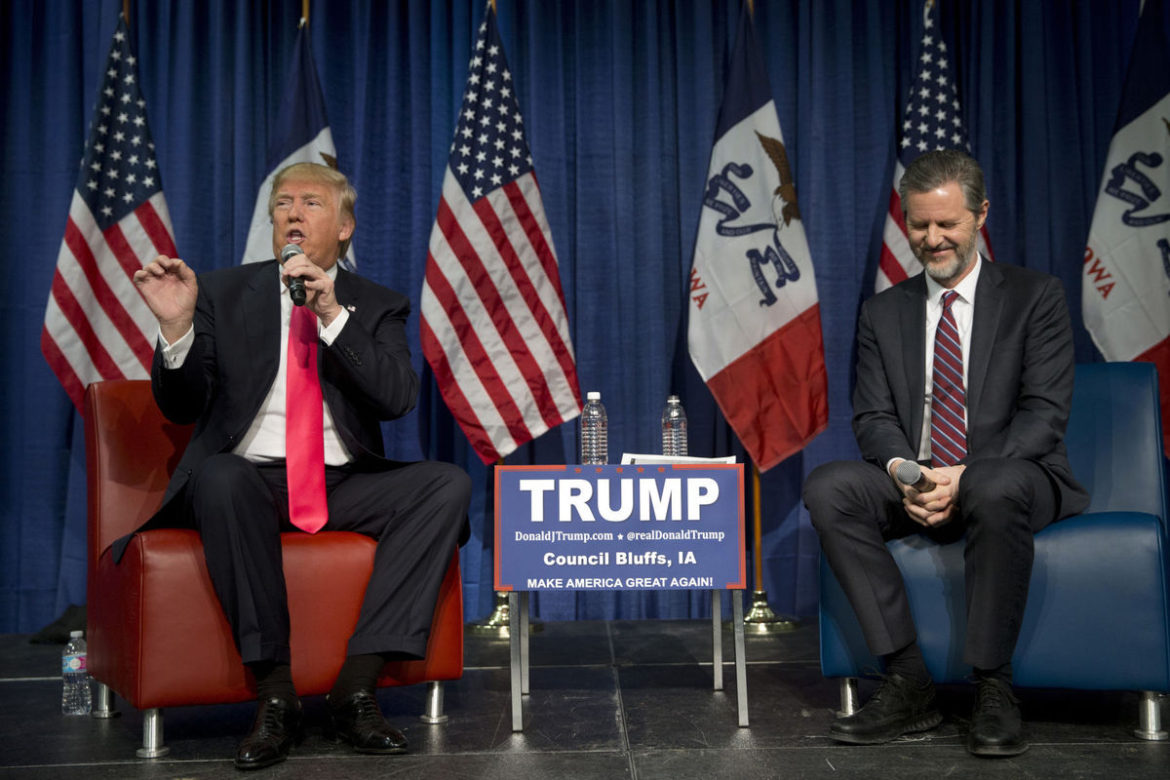 The President of Liberty University, Dr. Jerry Falwell Jr., has endorsed Corey Stewart for US Senate.Â  From wfirnews:Â

â€œIt is vital that we turn the tide in Virginia so that President Trumpâ€™s agenda can succeed. With that in mind, I urge Virginians to back Corey Stewart for U.S. Senate,â€ he concluded.

Corey Stewart’s response to the endorsement:

â€œJerry Falwell has spent his life making our state and nation a better place through strongÂ education centered first on faith, and he was instrumental in electing Donald Trump president, â€ Stewart said, â€œVirginiaâ€™s awakening is happening, and Dr. Falwellâ€™sÂ endorsement is proof positiveÂ conservative Republicans will take back Virginia,â€ Stewart said.

SO a hog who GIVES himself a LAVISH $1,000,000 PLUS salary likes Stewart. Big Deal, aye? TRUMP the BILLIONAIRE likes to grab pussy and sell us out to Satanic Lord Putin. You don’t care, do you?! Thanks be to God that when the whores to Satan hurry into the abyss the faithful to the Lord will stand cool and calm in the power of the Holy Spirit! Hallelujah.

Stewart is unelectable in Virginia and taints irretrievably any ticket he heads. The voters Republicans need for victory reside at the center, not the fringe. Hoping against hope that Democrats stay home is not a strategy for these times of anti-Trump anger, a strong electoral GOTV motivator.

I used to think that, but then saw Stewart’s strong results in the governor primary. Clearly he resonated with people.

Like Trump, Stewart wouldn’t have been my first choice but I now think his firebrand personality has the best shot at pulling of a senatorial win. I’m betting on his strong convictions to give us a statewide win.

It is either Stewart or we should just save a bunch of time and money and not even bother to run anyone against Kaine.

Stewart will get the nazi, white supremacist and pedofile vote in Virginia, is there enough of them to push him over the finish line…not.

So how’s running Ed Gillespie or similar candidates working out for ya, huh?

Suggesting that the alternative to Stewart is Gillespie is part and parcel of the problem.

Neither is a good choice for Virginia.

Choose a socially open-minded, modern fiscal conservative — a businessperson of some renown would be a good choice, but definitely a Virginian without carpet baggage. A leader ready to govern.

The fringe right is painted into a corner with nowhere else to go. The center is where the competition occurs and the battle the RPV must win to regain statewide relevance.

I am pleased to say I will not be voting on the Senatorial Candidates based on any endorsement even ore based on endorsements of people from this area who have sat on their hand and watched this community allow Santurary for illegal immigration through our Construction industry.
There is much talk from Republicans in the Lynchburg area with not one ounce production.

The College and LCA are awsome, let’s just leave it at that.

I’m a bit confused here. You don’t like Corey Stewart – even though he is the most hard line on illegals ever in Virginia? Is there anyone who would satisfy you?

I took this to mean the Falwell endorsement did not matter to him, and that Falwell has sat by, not that he was not going to support Corey.

John,
My comment is not about Mr. Stewart, yet.
My opinion is not as bold against illegals so much as it is against the Va. State laws that they are allowed to break,
a states right kinda thing.

Endorsements are meant to be public display of one’s support and sometimes the public should look closer at the one making the endorsements.
It would be nice to see those at Liberty University, Thomas Rd Baptist and LCA put themselves above this.
Now for Jerry Falwell Jr. on Va. Alcohol privatization,
He said; that he did not believe that our forefathers intended for government to be in the liquor sales bussiness.
I will counter that with our freedom comes from the creator and with that we write law. These alcohol laws we have on Va assist us in the Godley endeavor of keeping alcohol out of the family and the reach of children.
Now for J.Jr’s next move I hold offensive to the Lynchburg working class families and community is his endorsement of the Cornerstone Community on Greenview Dr.
This development had numerous contractors using illegal labor. This development is a major part causing the issue of current Executive order 24 and The VOSHA to DPOR Notification policy implemented July 1st , 2015.
Now for Corey Stewart for Senate he will not be able to claim that he is against illegal immigration, he will have to broaden himself.
November 2018 is a lifetime away in politics.
I look to pen a letter to Senator Kaine about my concerns in current Tax scam legislation. I will be asking him not to support it based on the fact that it is NOT Comprehensive. This legislation does not address Employee Misclassification nation wide or to the effect that States like Va allow illegal employment of numerous individuals under one single 1099 issues/unlicensed contracting. I will praise the endeavors of current VOSHA/DOLI Commissioner Davenport and Executive order 24 by Governor McAuliffe.
John, I hope that I have answered you in an articulate manner.
Now you brought up “illegals”.
Please answer me this;
Why is current proclaimed “Tax Reform” lacking in addressing Tax Fraud? or even E-Verify?

Illegal immigration is nothing more than campaign talk.
Deceitful it is.

I’ll say this about Stewart, he’s not making the same mistake so many of our electeds and candidates have made, trying to thread the needle in regards to Trump. I think this will help him greatly among evangelicals in the race for the nomination. How this plays in the general, we’ll have to wait. Virginia isn’t Alabama, and much will depend on how well Trump is doing during that time. At least Stewart will be able to have a clear campign message: I support the President’s agenda…drain the swamp”.