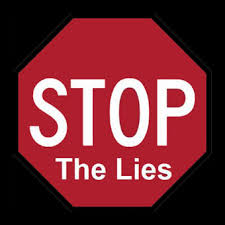 Jill McCabe, A Campaign of Lies and Buys

Jill McCabe, Governor McAuliffe’s handpicked candidate to beat Senator Dick Black in the 13th Senate district, has a run a campaign of lies and television ad buys to present more lies. McCabe has recently put an additional $230,000 into buying more negative television ads, bringing her total ad buys to $535,000. Quite a chunk of change.  Governor McAuliffe really, really, wants this seat and will spend anything to get it.

We have previously reported on Jill McCabe’s support of Planned Parenthood and their support of her.  Planned Parenthood has donated $140,934 to her campaign. McCabe supports abortion on demand, even in the third trimester.  McCabe brags about support from actress Lena Dunham who brags about her Halloween costume as a Planned Parenthood baby butcher.  Seriously?  Who does that? McCabe has terrible judgment and awful friends.  Who would hire McCabe to be their baby’s doctor?  Or their Senator?

The fact is that Senator Dick Black:

Another huge lie came from McCabe when she claimed to be a Virginia State Senator! 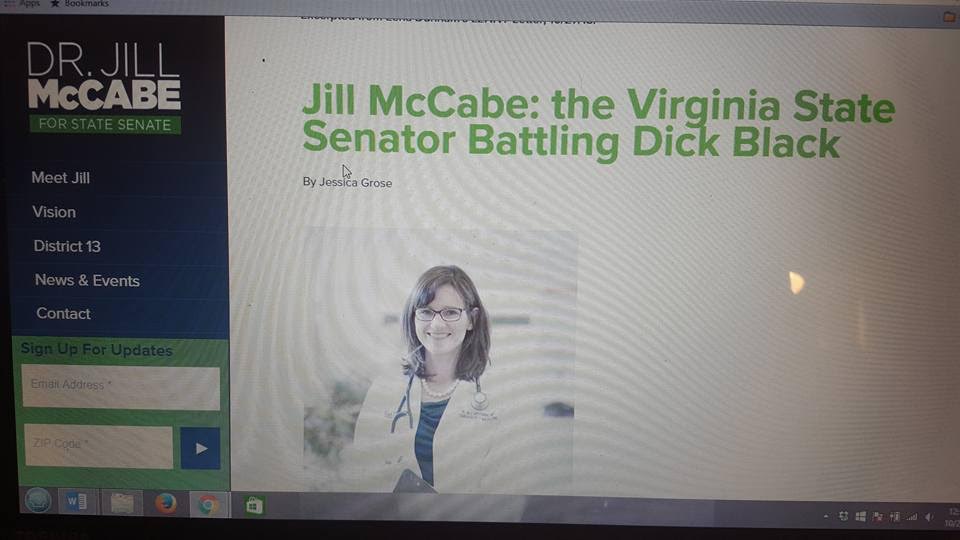 Wow.  Again, who does that?

We cannot trust Jill McCabe to represent us in Richmond. She is simply not trustworthy.  Senator Dick Black has never lied to us and we know he never will.  Senator Black deserves our support and our votes on Tuesday.

Jill McCabe, A Campaign of Lies and Buys was last modified: October 29th, 2015 by Jeanine Martin

More undisputable lies from Black. Check this whopper out from his FB post:

“I’m the only candidate in this race to vote against the proposed I-66 tolls and I’m going to keep fighting to stop the new tolls. I’ve never wavered on my position because families can’t afford another $340 to commute to work.

Well, first off there has never been a vote so I am not sure what his is drinking to make Black think he voted against it. Second observation, I assume his “handlers” didn’t catch this one. Better start watching him on Facebook, before he strikes again.

Just alerted Sen Black to info received in an email from her campaign that they are asking supporters to come to the Leesburg Halloween parade and they will have adult costumes for them????

Maybe they will all dress up like Jill’s idol, Lena Dunham, and dress up as Planned Parenthood abortion doctors.

I shudder to think what those costumes might be! Will they all be Obama and abortion doctors?

Maybe they will have a image of Sen Black on it

Holy Cow!! They DID dress up as Doctors!!! Can you believe it???

NO!!! WOW!! That’s disgusting. What awful people they are!

it actually looked good and promoted a positive image, unless you are already against anything non-GOP

Yup. Black voted against all the transportation improvements we are seeing:

Of course he has no ethical meter and deems it appropriate to show up at the ribbon cutton ceremonies celebrating the achievement(s). He has done this over and over. Re-writing history includes his claim to being the impetuous behind Rt 28. Based on his current mental state I do cut him a break because I really think he is convinced he voted the other way.

Poor Blackout. You’ve been suffering from your hatred of Dick Black for so long, it has damaged your ability to think clearly. You’re right about one thing in that Dick Black did not vote for the largest tax increase in VA’s history, but all those transportation projects were prioritized thanks to Black’s efforts as well as others.

The fact that you and the other Democrats have to lie about his record, smear his reputation, and (your particular favorite) make veiled claims that he is in poor health (which is completely false) show that you really have nothing to run on but hatred.

Haha, so Black votes against the funding, then decides he’ll help prioritize them??? You’re kidding right? He voted against that is not deniable, that is not lying about his record. I am sorry the fact doesn’t fit your agenda. Also, you assume he has any ability to influence anything. Wrong a second time.

So your claim is that the only way someone can take credit for doing something in politics is by voting to raise taxes? Hate to tell you Blackout, but that’s not the way things work, but it is revealing of the Democrat mindset.

Another swing and a miss.

Is that really you Blackout? Long time, no see.
Gee, why would someone vote against the massive Transportation Tax? Maybe because we got: 1) The biggest tax increase in VA history (ostensibly for “transportation”) and then 2) Greenway tolls increased and then 3) Dulles Toll Road tolls increased and then 4) Democrats want to toll I-66 inside the beltway and then 5) Democrats advanced a plan to toll I-66 outside the Beltway a couple of days ago. We also got toll roads on the Beltway too.
So, what is the point of the Transportation Tax if we’re getting jacked with massive toll increases?
Northern Virginia is TOLLED ENOUGH ALREADY!

I love that, TOLLED ENOUGH ALREADY!

Me too. I just made it up. Let’s see if it catches on.

Nice to see you valid Black’s vote against transportation. Now tell me why he is showing up at the transportation ground breakings all over the county and talking about what a great achievement it is, representing his grand leadership. You’ll then have to tell me how that isn’t a lie.

You forget that it was subsequent legislation that required the funds to actually go to ranked transportation projects. At first, it was a boondoggle waiting to happen so I think anyone who voted against it was “smarter than the average bear” as they had to foresight to see it could be abused as a slush fund. And, as stated, we got new taxes plus a bunch of new tolls too. They got us coming and going (literally).
Go ask “State Senator Jill McCabe” about blatant lies. It must have been a delusion of grandeur.

You want to talk about lies?! Dick Black is showing up at every transportation improvement ground breaking taking credit for them. When he did everything he could (which is never very much) to kill the funding. He voted against it. That is a blatant lie.

This is a known practice of his. Including his claim he was part of the Route 28 improvements which is an absolute lie.

Shows us that the same old and busted jackasses behind Blackout are still as uninformed and vicious as ever. Thought I wouldn’t recognize his new garb. Now it’s off to the next alternate identity.

I thought I recognized that guy. He has the gall to attack Black for requiring Virginia to put a Lock Box on our Transportation funds before he would put more taxpayer money in there. Nice…..

Monk, hope you have enough ammo stored, the gov is about to come after your ridiculously racist avatar. You really need to stop supporting the virtues of the good slave owners.

So ….a black hand and a white hand shaking is now “racist”? You people are a special kind of stupid, aren’t you?

Are you so stupid you don’t see the flag behind it. Most will see the white hand as holding the black hand in bondage. Especially with the racist flag in the background. Looks like a KKK advertisement.

Come to think of it, I sorta like the use of the confederate flag, it helps people self identify as racists.

So does this mean he did nothing? Because there are several others and he’s the one who sponsored the funding mechanism that built Rt. 28. http://lis.virginia.gov/cgi-bin/legp604.exe?001+sum+HB1287

Oh, I found another bill that Sen. Black sponsored to create the Rt. 28 freeway. You can read all about it here: http://lis.virginia.gov/cgi-bin/legp604.exe?021+sum+HB426

I thought Jill McCabe seemed like a nice person, but I have never seen anyone smear another person so horribly. Now it makes sense why Jill McCabe’s whole campaign has been focused on abortion and birth control. I had some Planned Parenthood girls knock on my door for her too. I didn’t realize she was actually in the pocket of the abortion industry. I thought they were supposed to be helping women, not spending thousands on electing Democrats!

“I thought they were supposed to be helping women, not spending thousands on electing Democrats!”
This is why Democrats are so supportive of Planned Parenthood—they launder money for them.
According to PP’s annual report, they get $528M from government entities. They take that money and then give donations to Democrats. Our taxes pay for Planned Parenthood, pay for abortions, and pay to get Democrats elected.

Bravo, you completely and totally get the scam though it’s small potatoes compared to the tsunami of cash washing over the party via compulsory American union dues and fees from the public and education sectors.