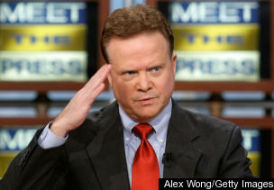 Am I the only one who laughs when I hear former Virginia Senator Jim Webb is running for President?  This is the man who has quit every job he’s ever had including Secretary of the Navy and the Marine Corps.  He has said he prefers solitary activities like reading and writing. Webb tried being a Senator but he had to deal with all those people and they wouldn’t let him be the boss so he chose not to run again. Another job he couldn’t handle.  So why not run for President?

Now we learn that “Meet the Press” moderator Chuck Todd’s wife, Kristian Denny Todd, a democratic consultant, is advising on the Webb campaign for President.  Todd was Webb’s communications director when he ran for Senate in 2006.

Who’s laughing with me at the ridiculousness of Jim Webb running for President?  Does Hillary know about this?  If she does, no doubt she’s laughing too!

It is a possibility, I mean look at McDonnell as VP and Cuccinelli as Governor . The two of them together allowed MANY illegal aliens to work as unlicensed contractors and illegal employers in Virginia.
Yes they did not even bring it to the attention of the JLARC that they were issuing them DOLI violations as { unlicensed } building contractors . Some Democrats are bleeding heart liberals but I have yet to meet a Republican that is not complicit in illegal aliens conducting illegal commerce.
If Republicans want to lead speak up what do they have ?
The Task Force on Employee Misclassification updated the Va. Governor on Dec.01 , 2014 .
Where are the Republicans talking about illegal alien underground labor market in the Va. Construction Industry ? There should be data in this ” update ” , McDonnell kept it from JLARC 427 . Will Va. Republicans turn a willful blind eye once again ? I say yes.
If Jim Webb discusses this he will carry every county in Southwest Virginia , it will be picked up on quickly throughout rural PA and Ohio.
McDonnell is the MicDaddy of asylum in Va.
Will Republicans allow McAuliffe to be the MaCdaddy of asylum ?

I really don’t give a fark about that now because the discussion is about Jim Webb.

That is sweet there is not a Republican in this state , site or even you that will measure up to Mr. Webb.

I think ameri…canwork raises a pertinent issue, because it speaks to the viability of a Webb campaign. I like Jim Webb. Certainly, Jim Webb is much more qualified NOW than Barack Obama was in 2008. And having been a registered voter in this state for 20 years, I have found Jim Webb to be the only political figure to address the concerns of native-born, blue collar workers. Yeah, I have my top secret clearance and I work in STEM, so no illegal immigrant is going to crowd me out of a job, but say that to the tens of millions of native born Americans who never went to college but can make a good living as carpenters, drywallers, or in construction. If given a choice between Jeb Bush and Jim Webb, I probably would vote for Jim Webb.

Jim Webb quit all those jobs because he has integrity and wasn’t going to stick around in a place where he fundamentally disagreed with what was happening. I definitely wouldn’t say he couldn’t handle being a Senator, he got the GI bill passed and if it wasn’t for Harry Reid, would have passed comprehensive criminal justice reform as well. I don’t know if his personality is well suited to be President, but he’s got more experience in national security affairs than any of the GOP’s potential candidates. Here’s his citation for his Navy Cross, an award second only to the Medal of Honor. I don’t think he’s anything to laugh at.

“The Navy Cross is presented to James H. Webb, Jr., First Lieutenant, U.S. Marine Corps, for extraordinary heroism while serving as a Platoon Commander with Company D, First Battalion, Fifth Marines, First Marine Division (Reinforced), Fleet Marine Force, in connection with combat operations against the enemy in the Republic of Vietnam. On July 10, 1969, while participating in a company-sized search and destroy operation deep in hostile territory, First Lieutenant Webb’s platoon discovered a well-camouflaged bunker complex that appeared to be unoccupied. Deploying his men into defensive positions, First Lieutenant Webb was advancing to the first bunker when three enemy soldiers armed with hand grenades jumped out. Reacting instantly, he grabbed the closest man and, brandishing his .45 caliber pistol at the others, apprehended all three of the soldiers. Accompanied by one of his men, he then approached the second bunker and called for the enemy to surrender. When the hostile soldiers failed to answer him and threw a grenade that detonated dangerously close to him, First Lieutenant Webb detonated a claymore mine in the bunker aperture, accounting for two enemy casualties and disclosing the entrance to a tunnel. Despite the smoke and debris from the explosion and the possibility of enemy soldiers hiding in the tunnel, he then conducted a thorough search that yielded several items of equipment and numerous documents containing valuable intelligence data. Continuing the assault, he approached a third bunker and was preparing to fire into it when the enemy threw another grenade. Observing the grenade land dangerously close to his companion, First Lieutenant Webb simultaneously fired his weapon at the enemy, pushed the Marine away from the grenade, and shielded him from the explosion with his own body. Although sustaining painful fragmentation wounds from the explosion, he managed to throw a grenade into the aperture and completely destroy the remaining bunker. By his courage, aggressive leadership, and selfless devotion to duty, First Lieutenant Webb upheld the highest traditions of the Marine Corps and of the United States Naval Service”

I agree, Max. He’s formidable on military and national security issues. Anyone with a Navy Cross deserves respect, and with his GI Bill, he’s definitely got the respect of a lot of military folks. But everything else we know about him says he doesn’t have the temperament to get elected, much less serve as president. Like McCain, but for somewhat different reasons.

One of many key personality traits required of any successful Chief Executive is the willingness, nay absolute necessity, to “stick around” when you are not necessarily in agreement. That is not an integrity question but one of character and stated commitment to others. For what ever reason Jim Webb has demonstrated this to be a difficult issue for him to adhere to in both his political and personal life. Doesn’t make him a bad person just one unsuited to function in the role of POTUS. Having served in a direct reporting relationship with two Medal of Honor winners while a recon member of MACV/SOG in the 5th SF Group the thing I remembered most about these individuals was a total absence of ever wrapping themselves in the flag for their actions and always being the first to laugh at their own screw ups, in other words – humble. While you can respect the acts in the end its the man you need to assess.

I’m not going to dispute that Webb isn’t suited personality wise to be President, but then again neither is Obama and he’s still somehow made it through 6 years. However I don’t think you can compare only serving one full term as Senator and resigning as SecNav to the lack of commitment you are describing. High level officials often resign when they realize they can no longer faithfully carry out the wishes of their superiors. That is true integrity, not an unwillingness to stick around. We could use a lot more people in politics who understand when its time to walk away and don’t try and stick around purely for ego or financial purposes. I don’t really get where you are coming from with the “wrapping themselves in the flag comment.” Since when has Webb ever done that? Aside from his books, he’s been far more reluctant to talk about what he went through in combat than just about any other Veteran politician I’ve ever seen. He doesn’t go around bragging about his service like some people. He shunned Bush when he asked about his son in Iraq rather than turn a potential answer into a PR move in front of the TV cameras.

Lawrence – I used to run the “Show Me What You Got” mini-triathlons the 5th Group used to host at Fort Bragg. Good guys! But swimming in McKellars Lake in October was cold!

Lack of qualifications hasn’t stopped others from pursuing the presidency … and in some unfortunate cases actually winning.

So true. We need only look toward the current occupant of the White House.

Agree, Jim Webb has political ADD with a dash of entitlement – he wants it all, but he shouldn’t have to work for it, but he thinks he can do it, but it’s all so tedious, but he also wants to do 12 other things. I suspect Kristian Todd will be looking for a job soon.

It’s “Marine Corps” not “Corp” – but you are right – Webb would make a terrible President.