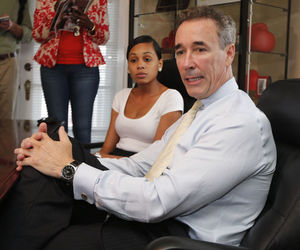 Former Delegate Joe Morrissey will soon move again, to North Richmond. He and his finance, Myrna Warren (formerly known as Myrna Pride) will soon settle on a home on Seminary Avenue. Â It appears Morrissey’s move in his preparation for a bid for Mayor of Richmond.

â€œI donâ€™t think it takes a great deal of scientific analysis to glean what office Iâ€™m interested in,â€ Morrissey said when asked about the coming mayoral contest. I’m very engaged in the politics of the city. Iâ€™m staying involved.â€

Last year Morrissey went to jail for his relationship with the underage Pride, an employee in his law office. Morrissey is 58 years old and his bride-to-be is now 19. Â The couple is expecting their second child in April, their marriage will follow in May at Morrissey’s farm in Varina.

Last year Morrissey withdrew from the Senate race against Rosalyn Dance due to health problems that have been successfully treated.

Joe Morrissey Continues to Hint at a Run for Mayor Next Year was last modified: December 18th, 2015 by Jeanine Martin

From the related article in the link: â€œI donâ€™t think it takes a great deal of scientific analysis to glean what office Iâ€™m interested in,â€ Morrissey said …..”. Yeah, I think we all know. Gag.

I for one would like the clown show to end in the City of Richmond. Can we revert to the Council Manager form of government – please?