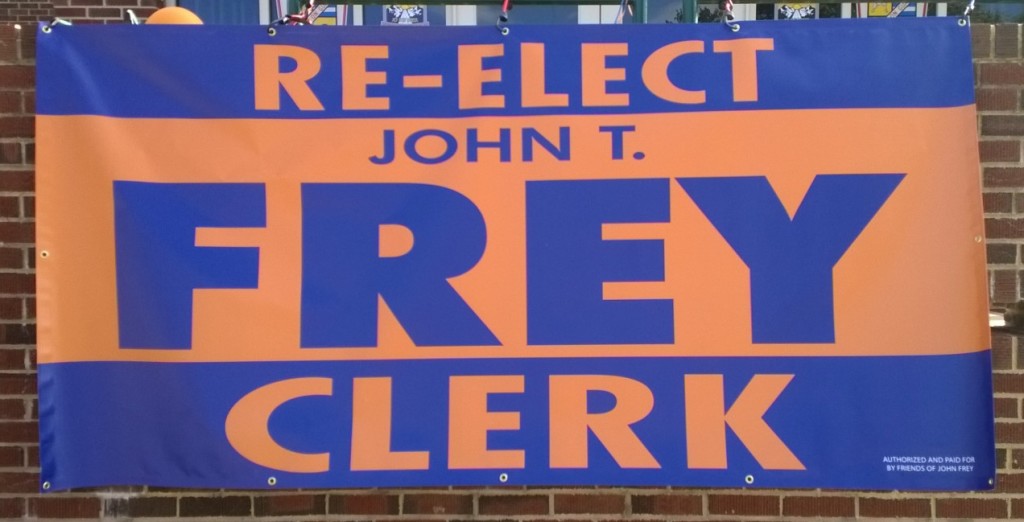 John Frey for Fairfax Clerk of the Court

written by Taller Than Madison November 3, 2015

The easiest decision for voters in Fairfax County to make in the ballot booth on Tuesday is casting a vote for John Frey for Clerk of the Court.

John has done everything that can be done to deserve re-election. As the chief administrator for the commonwealthâ€™s largest courthouse, John has done an exceptional job running a smooth and efficient operation. With over 800 roles to perform the Clerkâ€™s office could easily become a disorganized mess as Fairfaxâ€™s large population could create a logistical backlog from everything from marriage licenses to Wills. We need John in the Clerkâ€™s office to continue to keep things so well organized.

This may be a partisan blog but this endorsement is not partisan in anyway. As our political science textbooks told us, there is no Republican or Democratic way to light a street, or in other words, county administrative offices are not fueled by partisanship. John is a great chief administrator. He has done everything he has been asked to do. He is fair, honest and very likable. There really is no reason to vote against him.

Among some of Johnâ€™s accomplishments as Clerk are being among the first to implement automated and online processes for land records, the probate system and marriage licenses, he streamlined the jury selection system, cases come up â€œspeedyâ€ and election totals each year are oversaw with the highest integrity. John has done such a great job running Virginiaâ€™s largest courthouse that a few years ago the National Association of County Recorders Election Officials and Clerks named him Public Official of the Year. And he was recognized as one of the 2015 Leaders in the Law. The job cannot be done any better.

So get out there on Tuesday and reward a great public official by returning him to the job he has performed so well. Doing so honors the bedrock principles of democracy.

John Frey for Fairfax Clerk of the Court was last modified: November 3rd, 2015 by Taller Than Madison

I door knocked for John (as well as Mollie Loeffler) in Mason District, hitting over 2,000 homes. I didn’t hear one bad thing about him and many positive things, surprising for a wizard hiding behind a curtain. The best thing I heard was someone who worked in the Arlington Court System who said that they were envious of the Fairfax Court System because of all the great improvements John made.

In light of all that positivity, I was shocked to see that John lost in Mason (40% of the 3-way vote) while winning in FFX (46%). Living inside the beltway gives one the blues 🙂