Last year I thought this message was vital; conservatives have to ask, where is our turning point? This year the dangers for our beloved America simply grow exponentially, and the question remains. 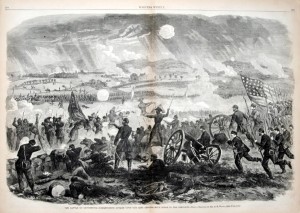 If you stand on the battlefields of our Civil War – Manassas, Chancellorsville, Gettysburg, Antietam and so many others, at just the right moment, you can almost hear the cannon fire, the urgency of ramrods preparing another rifle shot, the moans of fallen soldiers somewhere in the distance, and the thunder of horses on the sod.

They are the echoes drifting over those bloody battlefields a century and a half later. You must listen carefully – they are best heard in the heart.

The churning cross currents of the young nation perhaps made war inevitable. There was the bitter issue of slavery that was unresolved in the founding that brooded in the background. But it was an economic war as well, fueled by the nation exploding with the opportunity that liberty made available. Rapid industrial development and mechanical and scientific advances created new wealth while agriculturally based economies languished in relative terms.

And with new wealth came new power, while the growing territories and states across the Mississippi created both contentious political and economic issues for the nation. In the end the divisions grew too great. The whole could not stand as it had been.

Today, we are debating whether constitutional government shall stand at all.

This Independence Day, 238 years after the founding and 150 years after the Civil War, finds us a divided nation – unquestionably fighting a new civil war – without bullets – but a civil war just the same. The nation is as divided as it has ever been on the very issues that for over two centuries have made us the greatest economic and moral power in human history.

We are separated at the core by the very precept of “rights,” and what they mean and from whom they come and how they are secured. Are they granted to us by God, and not open to edit by the government; or in the modern world do those rights fall to the whim of those who govern? Are we individually sovereign or is the state sovereign? Do individuals produce the best and most when they first serve their families and themselves, or must government manage every affair to ensure subjective standards of fairness and compel one man to support another regardless of merit?

At the very core the fight is this: Is the Bill of Rights an anachronism of another era, unsuitable to the progressive age?

These questions are working themselves out on a hundred different battlefields, in varied ways, right now. Christianity, the Gospel of Christ, and founding doctrines of moral responsibility are being driven with a vengeance from the public square, with hardly a whimper from the orthodox and faithful.

The civil comity is turned upside down where law breakers have more rights than law abiders, and there is little but general grumbling. Every moral taboo is paraded as a good, and every virtue treated as an aberrant behavior. The resistance is scattered and futile.

If these are the battlegrounds of the new civil war, then social, economic and religious conservatives seem to be the only folks who don’t know it, or that they are losing that war.

This July 4th, success for the progressives looks like this: We are increasingly ruled by edict through an overpowering “permanent” government and a corrupt political class of both parties, impervious to the will of the governed. The rule of law is subverted to what is expedient without any concern about how that subversion might impact anyone but the ruling class. Crony-capitalism and favoritism has become just as important as talent and hard work.

Some recent glimpses of how the war progresses on the front lines: The Chief Justice of the Supreme Court rules a “fee” that is clearly identified as such in a law, will be called arbitrarily a “tax” so that he, and he alone, may cleverly decide for over 300 million citizens what their healthcare will look like; complex laws of many thousands of pages that only a handful of people have ever seen are voted on in the absence of committee participation in the Congress or public comment; essentially lawless federal agencies ignore both the Congress and the public and generate thousands of regulations and impose draconian fines and even criminal legal action, few of which can or will be challenged. Everywhere in the federal government, constitutional protections are treated as obstacles to be overcome; the law held in the breach, to be used only when it suits the government’s purposes.

During the Civil War there were battles that turned the tide of the war when it didn’t seem possible. Today, if conservatives are going to win some major battles that can turn the nation back towards its constitutional roots and moral clarity, then they are going to have to get into the war. They have to be on the right battlefields. It will take education in constitutional and policy basics, and outreach to new troops.

But above all else, political, social, and religious conservatives have to learn to fight. When they find themselves on the new Gettysburg battlefield, wherever and whatever that will be, they will have to remember that there is only one way to win wars – defeat the enemy.

This is a not a battle. This is not a war. The analogy does not fit. No one id dying. No one is getting shot. We have some differences of opinions and many radicals on both sides that make more noise than those who are more tolerant of multiple ideas. If we believe in the constitution, then we abide by the rules the legislature makes and the judicial affirms or denies. Our biggest trouble is from those on the fringes who are determine to force their will on the rest. This comes from the right and the left.

It is the rare war that can be successfully conducted on TWO fronts by the same group of protagonists. This unfortunately is the position the American conservative finds themselves in today. To the front we face a regenerated, virulent firm of statist based progressivism not seen in America since the days of Woodrow Wilson’s administration. To our rear we find an affiliated Republican Party mired in cronyism and self-serving struggles for the preservation of personal power. How have successful two front conflicts been conducted and won throughout history? The common theme has almost always been to conduct a strategy of “interior lines” which is based on the given that actions, communications, and logistics within a well defined area are shorter and more effective than those on the outside, therefore a surrounded force can more easily reinforce and move its assets around and even mount surprise attacks on the forces encircling it. One does not have to pledge allegiance to the machinations of todays establishment Republican Party to employ the value of its interior lines to remove the progressive threat from the American body politick and then turn those very same lines onto the second front, the party itself. The first and perhaps most difficult step is the willingness of the conservative to agree to disagree with the only existing political tools readily available to achieve its short term goals. Put away the RINO rants and focus on the levers of power that will achieve conservative victories and policy implementation without ever losing sight of the ultimate goal of true constitutional governance. At the Battle of Antietam Lee, although outnumbered two-to-one, committed his entire force, while McClellan sent in less than three-quarters of his army, enabling Lee to fight the Federals to a standstill and ultimate withdrawal from the field. It can be done.

This isn’t a new battlefield. Republicans should have been on this since Progressivism reared it’s ugly head over 100 years ago. Now we have more than one battlefield and no one knows where to go first because no one understood the danger until now. Why are we having to fight for the Constitution at all? That is the bigger question. The answer is because no one was paying attention. Now we are hanging in the balance and the very few that are fighting are being attacked constantly. We need more soldiers in this epic battle and we need them fast.