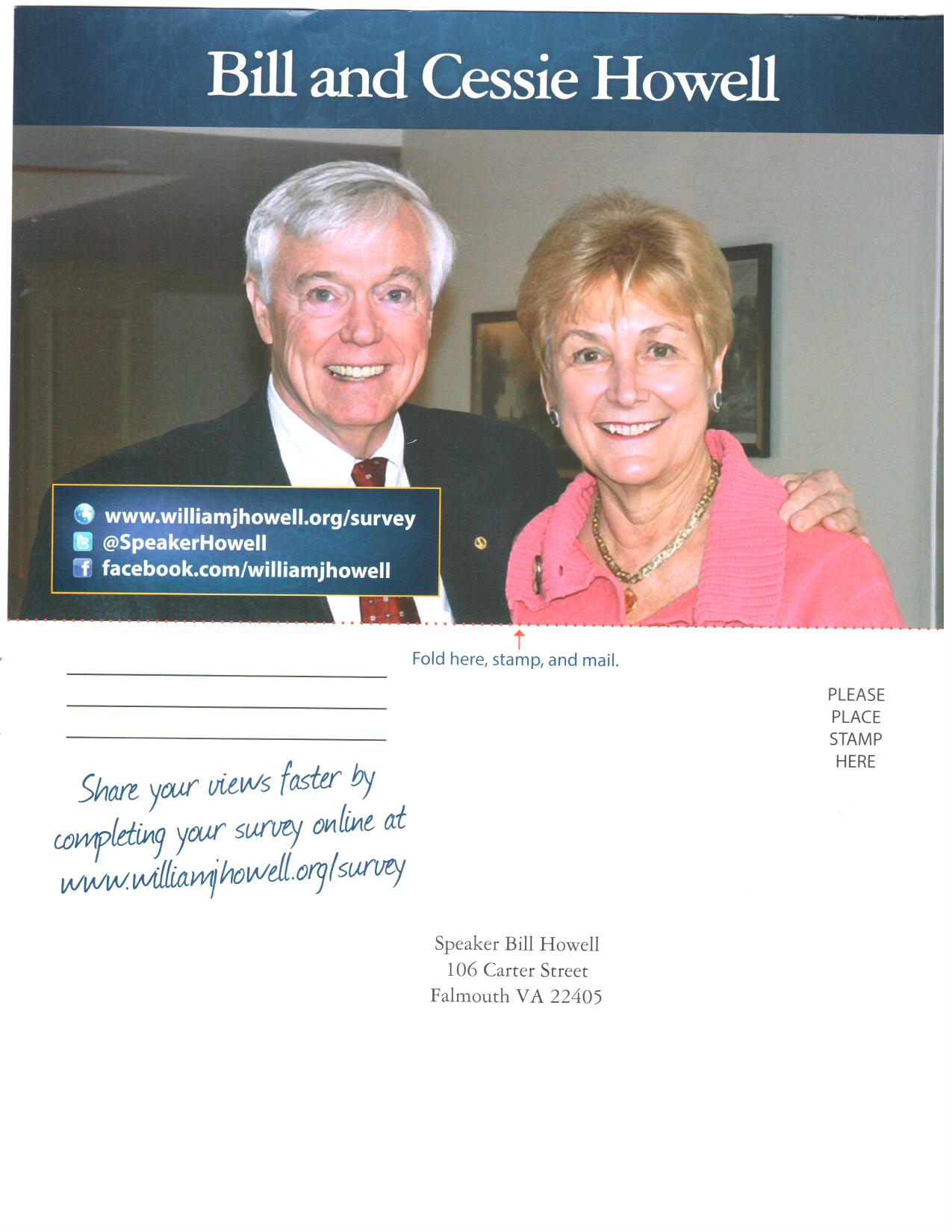 MailGate: the Candidate Mailer that Shouldn’t Have Happened

Let’s cut through the nonsense. Bill Howell’s mail piece that was sent out by RPV was a campaign piece, and Bill Howell is clearly in a contested primary. Ergo, RPV should not have sent it.[read_more]

This fuss started a couple days ago when it came out that the Republican Party of Virginia paid for a mailer to residents of Speaker Howell’s district. The piece was ostensibly an “issues survey,” but was adorned with lots of pictures of Howell and his family, along with his campaign logo, and encouragement to go to his campaign website, Facebook page, and Twitter account. And oh yeah, it also asked some hard hitting questions, like:

Do you support mandatory reporting requirements that require college administrators to report all allegations of rape or sexual assault to law enforcement, even if the victim does not press charges? [check support or oppose]

Pardon me for being cynical, but we all know these “issues surveys” are much more about simply engaging and persuading voters than they are an actual sincere effort to find out what constituents think. But that’s really beside the point, as is the umbrage taken with Ms. Stimpson’s email reaction to the mail piece. (As a State Central Committee member, I had my own issues with that email that I took directly to Stimpson).

Regardless of the earnestness (or lack thereof) of these kinds of pieces, the Republican Party of Virginia Plan of Organization is very clear that the Party “shall not endorse, nor contribute to from its funds, any candidate who is running for a Republican nomination for public office unless that candidate is unopposed for that nomination.” Sending out “The Howell Report” with his campaign logo and campaign website and glossy professional pics of him and his family, when it is “Paid for by the Republican Party of Virginia,” at the very least constitutes an in-kind contribution to his campaign, and at the very worst could be misinterpreted as an outright endorsement of Howell (particularly in the absence of a similar mailer from his opponent). That a campaign piece disguises itself as an issues survey does not immunize it from application of RPV’s rules. This isn’t rocket science, folks.

My good friend John Whitbeck, the new RPV Chairman, disagrees with this characterization on the basis that the piece was an issues survey sent ahead of the legislative session, and that the piece is returned to RPV as a means to aggregate responses and communicate them to legislators. This is apparently in line with past practice, so that’s fine, but it should be pointed out that in addition to the questionnaire, the mailer also included the following: 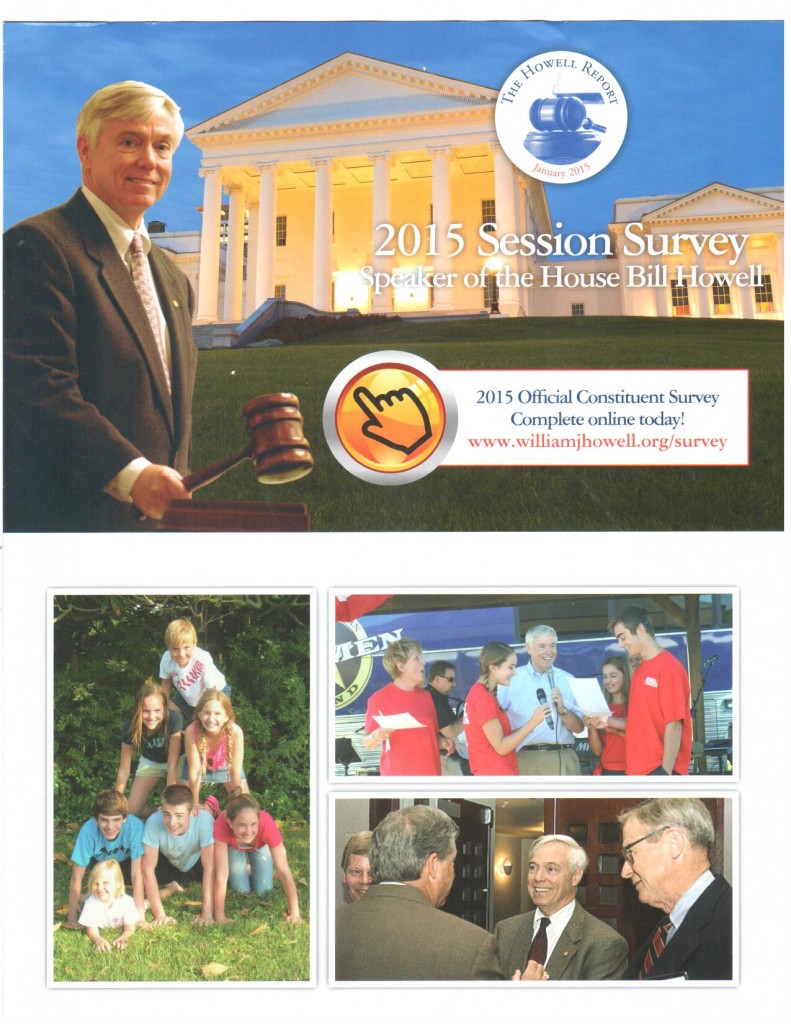 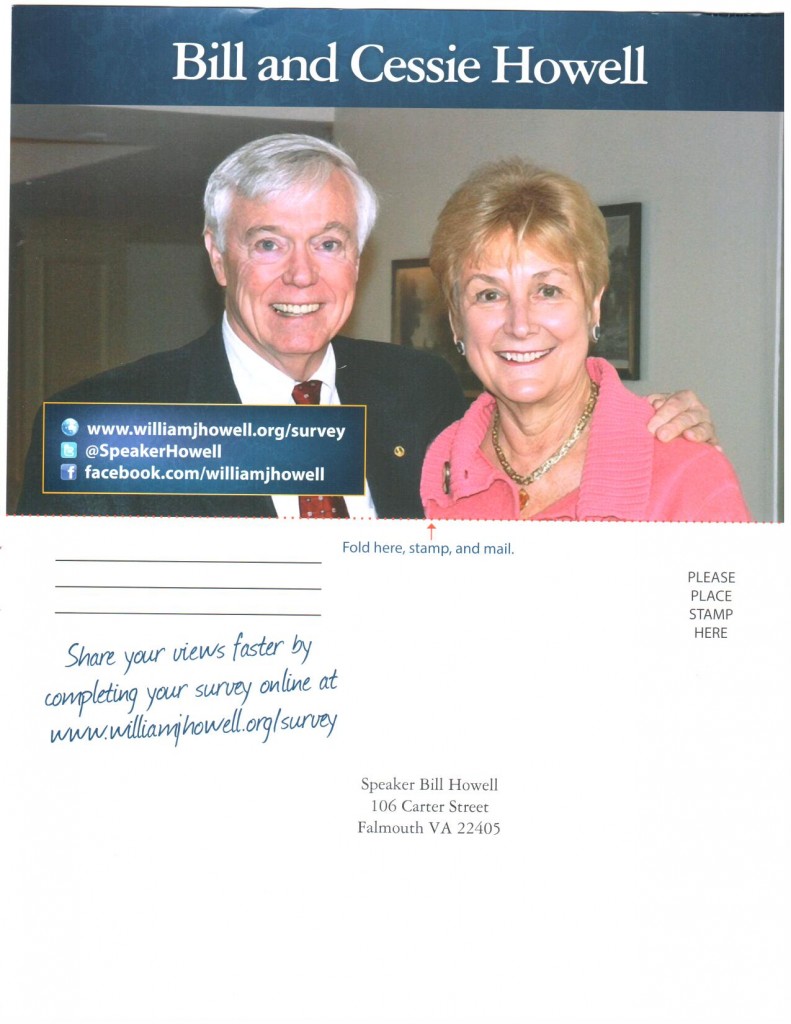 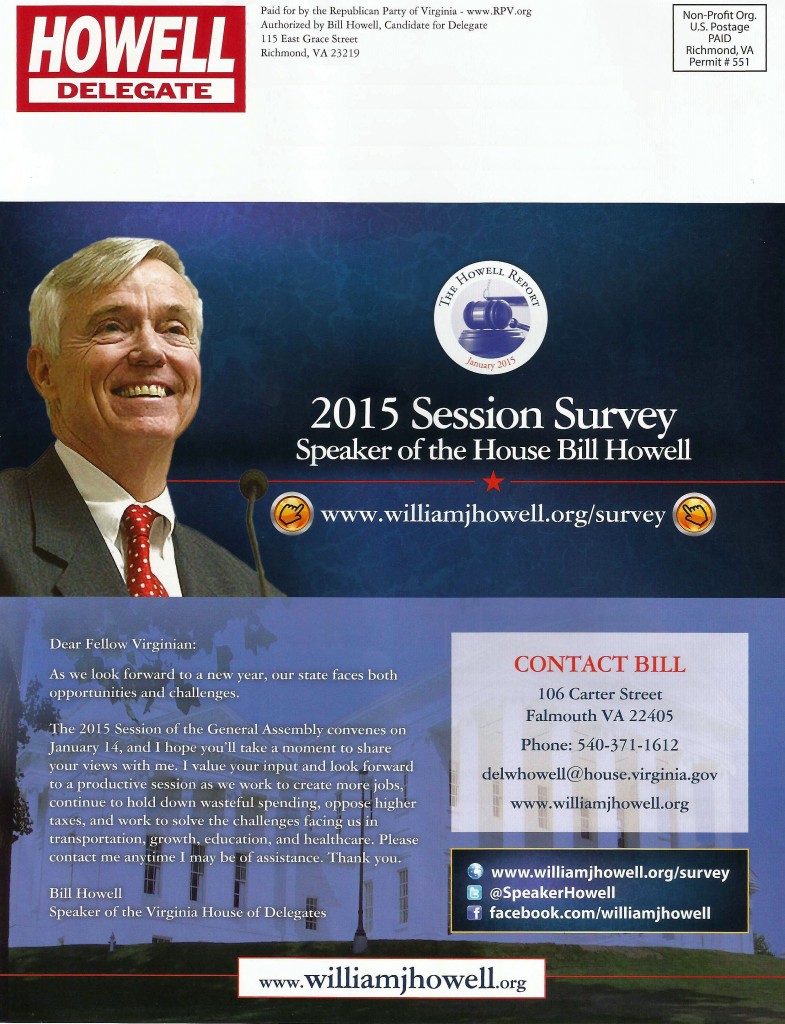 I note the return address isn’t anywhere near 115 Grace Street in Richmond.

At the end of the day, the whole reason we have this rule is to avoid anyone’s impression that there is an impropriety, and that RPV or any other official committee has picked sides.

Clearly the rule didn’t work in this case.

MailGate: the Candidate Mailer that Shouldn’t Have Happened was last modified: January 30th, 2015 by Chad Ochocinco

If rules were broken, to what end? Why have rules without punishment? Or, better yet, without some form of punishment, does one really have rules?

Desperation has many faces. I guess one of those faces is on that apparent “rule breaker” mailer.

The only way that I see to right the terrible wrong of this desperation mailer? Let the Stimpson team design and send a mailer at the expense of whomever paid for this mailer. Plus, a written apology from them.

Clearly the piece in question was much more than just a survey. It constituted a slick, full blown promotion of an incumbent who is being challenged in a primary by a fellow (gal) Republican. As such it is a violation of the RPV Party Plan, Article VII, Section I, Endorsement of
Candidates. Simply saying, “whoops, we made a mistake” or “it wasn’t really a promotion piece” is not good enough for me. To compound the issue, I was advised by an RPV official that RPV did NOT pay for the piece. Now we hear that they did. This is a hell of a way to build trust for a state organization whose reputation is already in tatters.

How come I didn’t get the mailer? Usually both my home and PO Box are stuffed with political mail. Should I assume, it was sent primarily to the Speaker’s district?

Yes, it was sent to people who could vote for Howell in the primary.

And Howell I guess, had no knowledge of it? Who gave permission to use all those pics?

Of course Howell knew about it. He has never denied that.

Ok, then according to media reports, both Whitbeck and Steve have addressed the Stimpson e-maiI? I have not seen anyone accuse Stimpson of breaking any rules. According to what I have read, Stimpson was simply stating what appears to be the facts, based on everything I have read in the media. Just what part of the e-mail is not the truth?

Now that the Stimpson e-mail has been addressed, just when will the “rule breakers” be addressed?

Apparently, Stimpson’s phone is ringing off the hook because she told the truth. Just when will the “rule breakers” phones start ringing?

We call breaking the rules “cheating” where I come from.

Do we really want “cheaters” to be involved in changing our Constitution?

Hope the new Chair of the RPV will eliminate sending these types of mailers into Districts with known Party challenges. I have long thought the Unit Committees have become incumbent re-election organizations & not made an effort to recruit new talent that support the “Creed”. These types of mailings seems to thwart newcomers.

“Paid for by the Republican Party. Authorized by Bill Howell, Candidate for Delegate.”

I don’t see what more evidence one needs to see how wrong this is.

Like most regrettable actions this could be easily dismissed as a unfortunate circumstance with a new Chairman transitioning into a new role and let the response “we will review how this type of survey is handled in the future” suffice and let it go at that. But as so often happens in these situations the follow up response ends up compounding the initial offense and exacerbating the issue. I am referring here to Chairman Whitbeck’s follow up reply to Ms. Stimpson’s initial complaint. Not only was it ill advised but it had a general tone of petty officialdom and chastisement that really wasn’t necessary or called for. If someone gives you a fig leaf don’t follow up with a lecture. Learning on the job is never an easy proposition and lets hope we can chalk it up to that and move on. As for party Executive Director Shaun Kenney well that is a different issue altogether and one Chairman Whitbeck will need to promptly assess.

Excellent take on what has happened.

Although that response was issued under Whitbeck’s name, I suspect he wasn’t actually the author. The content, tone and tenor make me suspect it was someone else who put it together. Tough week for my friend John – he got an early object lesson about the need for reform at RPV, but if you’re going to have that happen, right off the bat gives the best opportunity to actually change things.

You are right, it did not sound like John but the buck stops with him.