4:44 pm. That’s a wrap for me today. Some high level thoughts, and exclusive interviews, to come tomorrow.

4:40 pm Speeches continue. We’re told that Pete Snyder will not make it, so no public announcement today.

3:50 pm “The media spend more time talking about what Donald Trump said or Tweeted in the last 30 minutes than what Bill and Hillary Clinton have been doing for the past 30 years.” 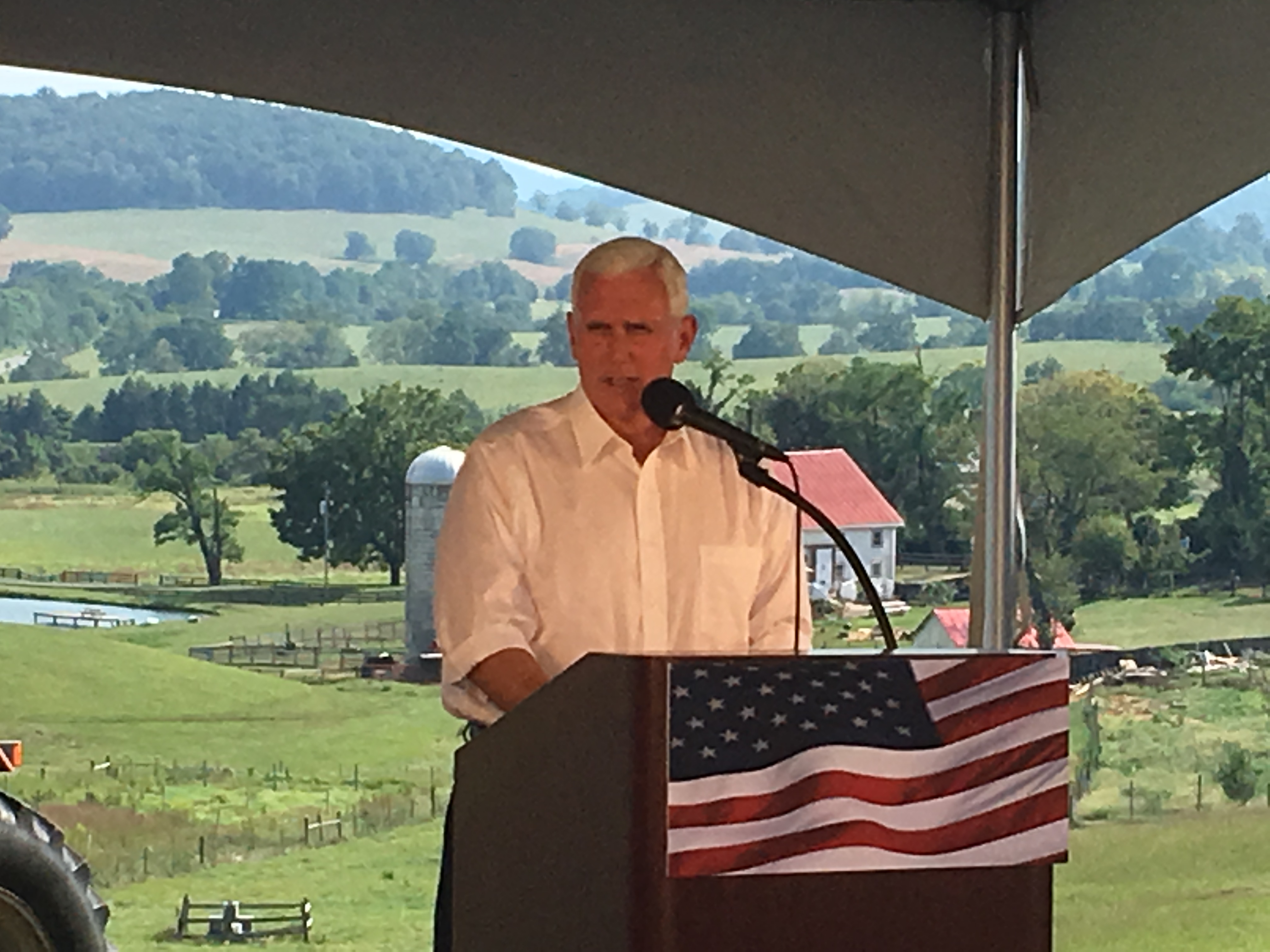 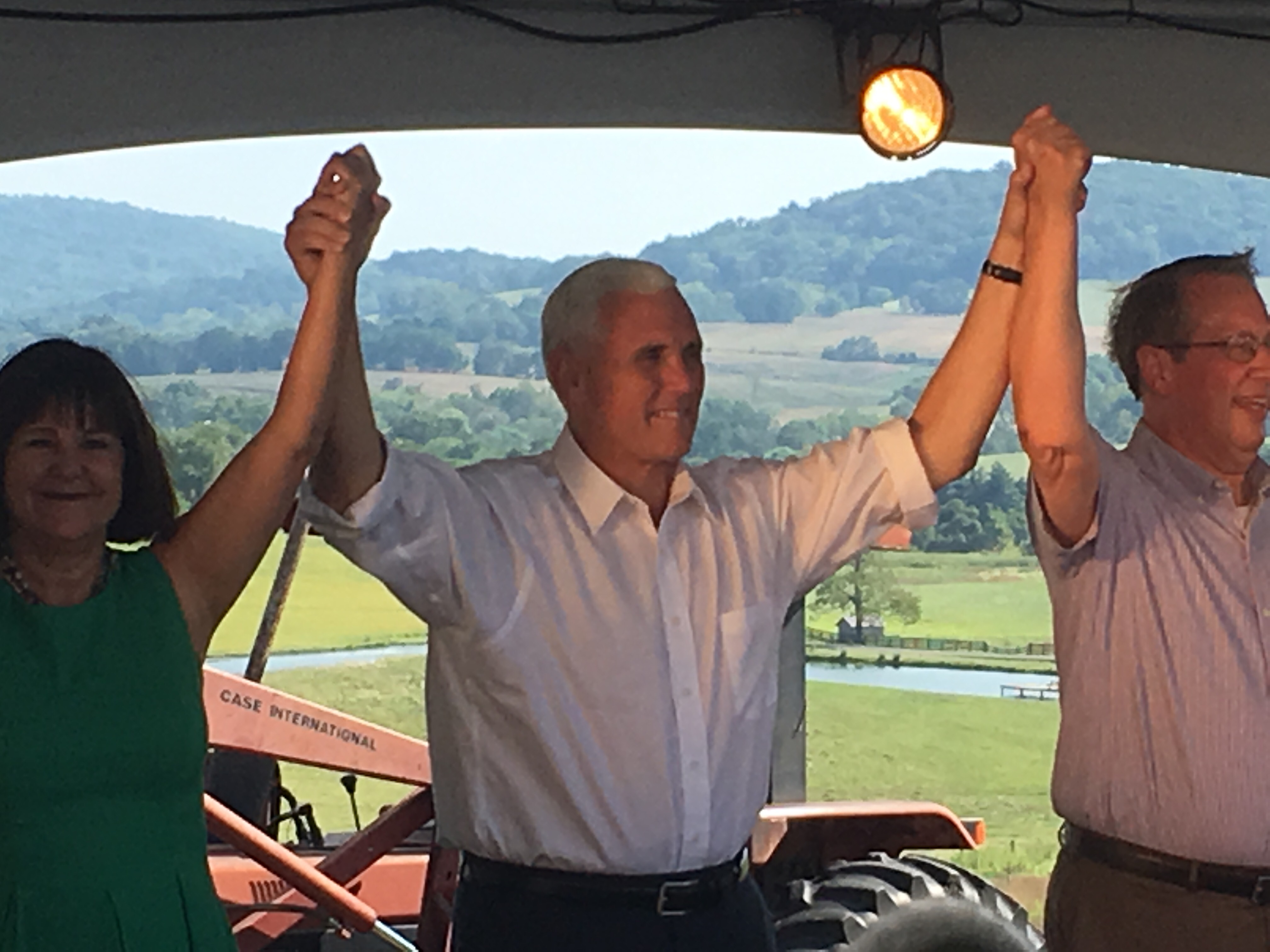 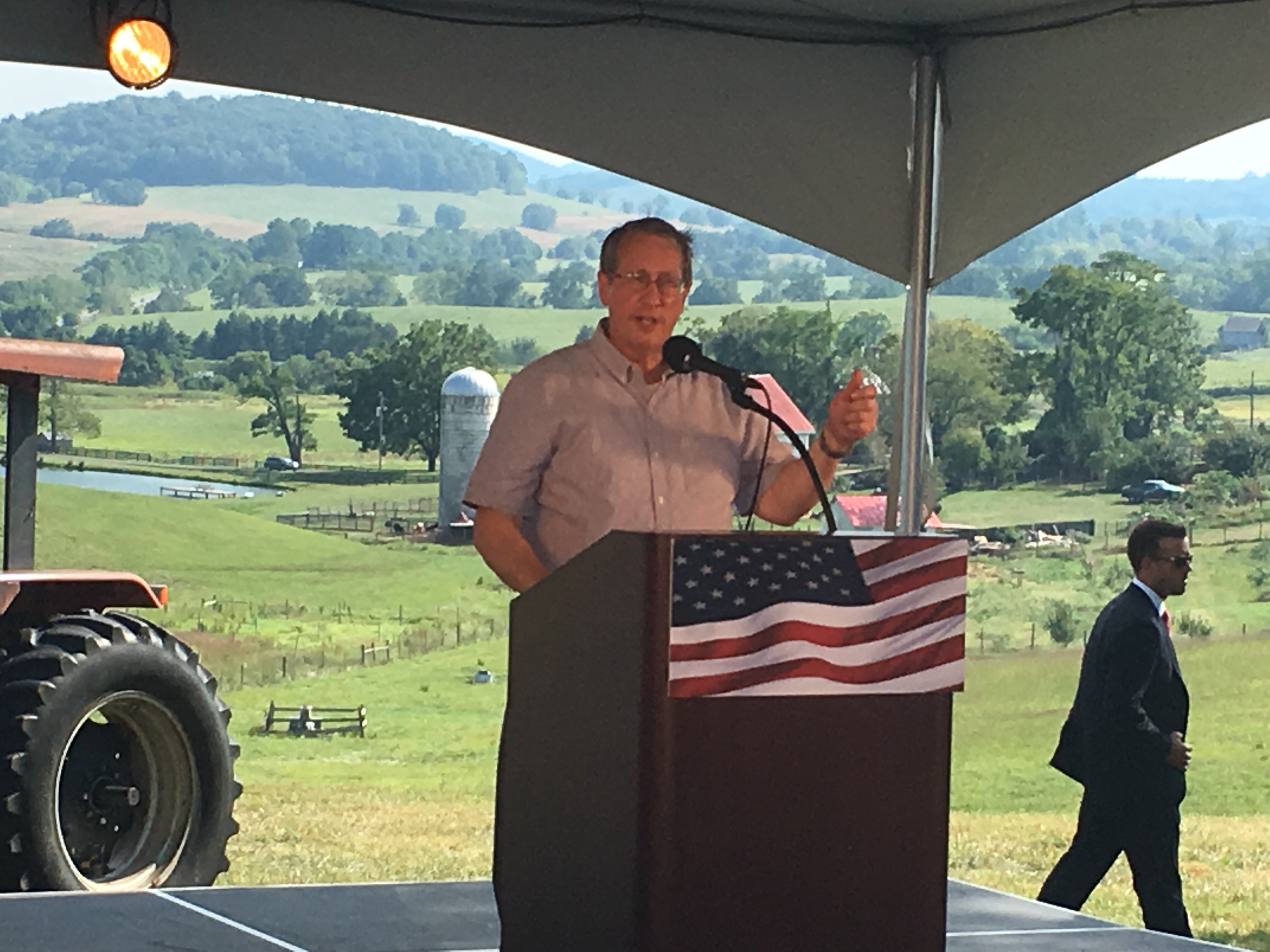 3:29 pmÂ A swarm of traveling media and Secret Service have descended. Pretty intense as all the final preparations being made for Pence’s speech.

3:26 pmÂ Governor Pence has arrived. Corey Stewart is introducing him. Stewart himself was introduced by National Committeewoman Cynthia Dunbar as “the next Governor of the great Comminwealth of Virginia.”

2:46Â pmÂ Security is tightening in anticipation of Governor Pence’s arrival. People are still arriving, with total attendance estimated by various sources to be between 500 and 800. UPDATE: one of the organizers says their count of attendees is just shy of 1,000.

2:35Â pmÂ A 9/11 tribute, on the eve of the 15th anniversary, is underway. Â I’ve not been doing a very good job of live blogging…sorry about that. Â Lots of folks to talk to, with friends gathered here from all over the state in a festive atmosphere.

The good news on that front is that we will have a good deal of video from interviews with candidates and others that we;ll be able to share tomorrow.

1:24 pm A lot of speculation swirling about Pete Snyder’s intentions today. The former candidate for Lieutenant Governor in 2013 is rumored to be preparing to announce his entry into the 2017 Governor’s race. He will be here in a couple of hours.

1:19 pm Rob Bell, grassroots animal and Delegate from Charlottesville, is talking about the lawsuit to stop Gov. McAuliffe’s unlawful restoration of voting rights. Very well received. His other opponent, John Adams, could not be here because he is speaking at a frirbd’s funeral. In his stead, he is represented by Shak Hill.

1:05 pm It’s hot, and shade is at a premium. But that hasn’t stopped the crowds from continuing to pour in.

There’s a palpable excitement here, at an amazing example of what grassroots activism can do. This event grew organically from the efforts of Martha Boneta in defending her rights to use her farm as she saw fit. Along the way, she’s helped build a broad based coalition that draws on all segments of the center-right coalition. We’ve got a lot to be proud of in Martha!

12:55 pm We’ve begun! Because of the long security lines, the start at this exciting event has been delayed. Opening ceremonies marked by a spirited invocation from E.W. Jackson. First speaker was former Governor Jim Gilmore, who exhorted the crowd to unity behind the Trump/Pence ticket.

[…] apparently a long time coming, and not just a product of the RNC protest. At Martha Boneta’s Liberty Farm Festival, where Stewart spoke as the Trump Chairman at the time, he was not even allowed to speak with or […]

Why wasn’t Pete Snyder there today?

It was the day after the event??

Did anyone notice that Barbara Comstock was not there? Not a sign or a booth (if she personally was already booked somewhere else).

Not her district yet right?.

It wasn’t Goodlatte, Whitman, or Brat’s either. But Barbara’s district is literally across the street.

Or Congressman Massie, from Kentucky who amazing by the way. It was great to have him there.

She needs votes in the 10th now, she may need Fauquier in the future, not showing up for Martha expresses solidarity with the Fauquier Dark Lords, shows disdain for liberty-minded populists, and frees her up to shake trees for votes. A triple!

It was a grassroots event.

Why would you expect them to cover it? Their only interests are Gillespie, Snyder, Comstock, and the opportunity to announce Brian S.’s next lame election campaign.

Likewise, Snyder won’t show up unless he gets to be the main act.

Hmmmm what could be the common thread…

Yes, it was a grassroots event so it was not expected BD folks would attend.

I believe this is how the cuckservatives at bd think the Republican party should be run..

Bearing Drift and TBE were sponsors.

This blog had seven bloggers in attendance. BD had one and he was not covering the event. It was a grassroots event so it’s not terribly surprising that BD was not in attendance. They don’t much like the grassroots.

Or the GOP Priest-Kings of Fauquier fatwa included Pete and BD as well.

Nobody is banned anymore from BD.

Fun fact: no one from the leadership of the Fauquier County Republican Party bothered to attend the event which featured many GOP candidates and the party’s vice presidential candidate Gov. Mike Pence. Go figure.

That’s because anything to do with personal liberty is against the agenda of Fauquier County’s supposed Republican power brokers.

They got power brokers? Is that why Pete was a no show?

Power brokers, ruling class, the synod, whatever you want refer to the power base of Fauquier County politics. Don’t know Pete, don’t really care about Pete. You want to know why he’s a no-show? Ask Pete. Pete is irrelevant to the Fauquier County Republican Committee leadership not attending.

Or Pete made the calculation upon advice of the FCRC if indeed they do have sufficient juice — I wasn’t aware they could do anything outside of their clique.

I know Martha is a finger in the eye of most Fauquier County, but for local Republicans not to recognize party luminaries in their own back yard, it does take a higher degree of ‘better than you.’

1. Sinecure is now my word of the day today!

2. You hit the nail on the head of life in Fauquier County.

That’s my question too, where was Pete?

More importantly, where was his barbecue?

I was wondering how they would treat the attendees or if they didn’t want this event there.

I was told FCRP refuses to allow anything Trump in their office. They are cows that need to be turned out to pasture.

Dunno. New Trump people are coming in as of this last week. In my opinion Trump should have never trusted the GOP w/any of it. I hope he learned a valuable lesson. Va’s GOP is far worse than the democrats.

Interesting that if you go to petesnyder.com the page is blank.

Is that like ‘Gabbo is coming?’ Or a Susan Stimpson level event?

Sock puppetry (posting under multiple fake names) is not allowed. It is destructive of actual dialogue, particularly when the comments are intended to attack others. A user who had been warned repeatedly previously about this type of abuse has been banned, and her comments removed.