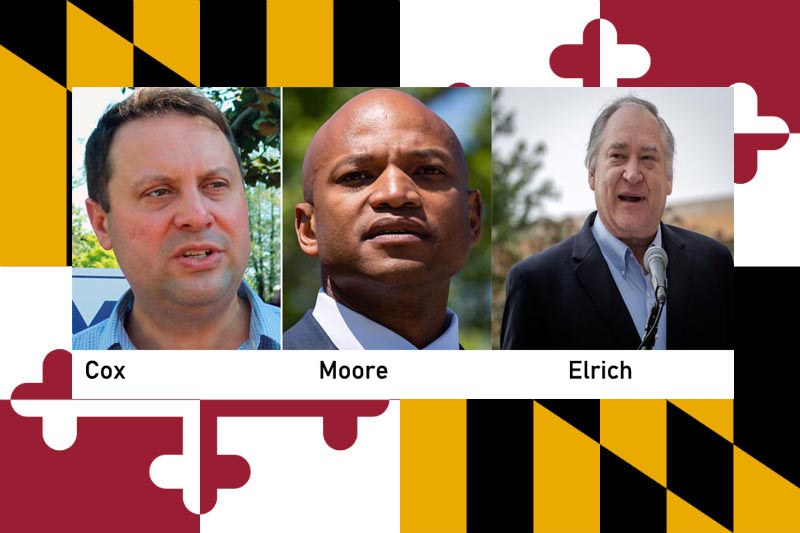 With the nomination of these three in recent primaries, is Maryland on its way to becoming known as the Freak State? (photos source: Washington Post)

I lived in Montgomery County, MD, from 1991 until 2002 when we moved to Leesburg.     It’s where I cut my teeth in politics and grassroots advocacy, primarily in the field of transportation.

With a population of 1.048 million (2020 census), making it Maryland’s largest jurisdiction, Montgomery County has long been liberal Democrat-controlled, and it has a highly educated and well-connected citizenry comprising government employees, high wage lobbyists and lawyers. There are hundreds of civic associations and little pressure groups, mostly liberal and NIMBY (Not in My Backyard).

And the Free State is 2 to 1 Democrat in contrast to Virginia, which is still somewhat of a two-party state.

On July 19, Democratic registered voters selected Wes Moore as their nominee for Governor, an African American author and nonprofit leader who has never held elected office in his life and has minimal business experience.

Current Republican Governor Larry Hogan did not hold elected office before becoming governor in 2015 but served in Bob Erhlich’s administration (2003 to 2007) and hails from an old Republican political family.  His father served in Congress and on the House Judiciary Committee during the Nixon impeachment hearings.  Hogan Sr. also was the last Republican to be Prince George’s County executive.

So, it’s quite unusual for a candidate like Moore to beat out a number of former elected officials to be nominated for governor – and, he won pretty good.

I can’t say determine yet if he’s a freak, but he is very weak on the issues, and I believe if he is elected he will be manipulated by Leftist groups and politicians with more experience.  Maryland is a state that worships professional politicians and technocrats.

Take transportation, for example.  The liberal Washington Post wrote in an editorial regarding a decision by Joe Biden’s Department of Transportation to put on hold a needed widening of I-495 and I-270 : “Mr. Moore identifies with Baltimore and has lived there for the past decade. His transportation policy, in which Maryland’s suburbs near Washington go virtually unmentioned, gives no indication that he grasps that they are full of drivers fed up with staggering traffic — or that it will get worse.”

This project impacts Virginia, which may have to cancel its portion of the Beltway widening if Moore is elected and goes a different direction.

But I believe Moore will win and become the state’s first black governor. His GOP opponent is Daniel Cox, who was backed by former President Trump in the primary against Kelly Schulz, who was Hogan’s Secretary of Labor and Secretary of Commerce (Hogan endorsed Schulz, and had she won, she’d be in an excellent position to beat Moore).

Cox is not just pro Trump, but as a state delegate, introduced impeachment articles against Hogan.  He feels the 2020 election was stolen, is prolife and pro 2nd amendment.  That works in some states, not in Maryland. In this state, Trump’s endorsement is poison.  And, frankly, it’s poison in Virginia and many other Purple states.

Cox actually swamped Schulz in the primary because a number of rural conservatives in Maryland feel Hogan is too much of a RINO.  And, Democrats put money into TV ads to help Cox in the primary (as they have in many primaries) calling him “too close to Trump, too conservative for Maryland.”

I hope Cox wins, but he is much too extreme for Free State voters.  Hogan is only the third Republican to win governor of Maryland since the late 1950s — and the only of the three to serve two terms.

The other race that really puts Maryland in the Loony Category occurred in the Montgomery County executive Democrat primary election, also July 19.

On Aug. 7, after weeks of ballot counting (state law states requires mail-in ballots cannot be counted until after the election), incumbent Marc Elrich edged out business owner David Blair by 35 votes.  Blair also lost the Democratic nomination to Elrich in 2018 by 79 votes.   A recount is going to happen.

Elrich is a Bernie Sanders socialist who first cut his teeth in politics on the Takoma Park City Council, and then as a Montgomery County council member.  I know him personally.

A high school social studies teacher by profession, Elrich is anti-business, anti-transportation, an environmental wacko and has left a fiscal mess in Montgomery.  If you try to talk to him, he will answer stridently with spin and deflection in an irritating lispy voice, often blaming business for the problems.

His GOP opponent is Reardon Sullivan, an African American small business owner and engineer, who stands little chance unless Democrats and independents get behind him.

U.S. Census Quarterly Census of Employment and Wages (QCEW)  data shows the county is worst off with Elrich at the helm and an all-Democrat County Council.

Jacob Sesker, a former Montgomery Planner, now with Harpswell Strategies, reported June 27 that over the last 3 full calendar years, Montgomery County had a net loss of 46 business establishments – about 1.3 lost each month – and employment dropped by 13,651 during that time, an average of 379 private sector jobs lost per month.

But none of this seems to matter to Maryland’s loony voters, just like voters in New York, California and Illinois who see jobs leaving, taxes increasing, but continue to vote for Democrats.

And, what Maryland does or does not do can impact us in Virginia.  Much of our population borders the Free State, not just Northern Virginia – notably, the I-495/I-270 toll lane project.

So, “Virginia is for Lovers,” and “Maryland is for Loonies” – it is now “The Freak State.”

“I hope Cox wins, but he is much too extreme for Free State voters.”

So, you sincerely hope the right wing fringe wacko wins against a candidate you cede does not appear to be an extremist and you state so in a piece where you are lamenting the supposed rise of extremists as candidates for office. Party above country… par for the course around here (especially for Ken).

I get that Hogan isn’t Virginia’s Republican cup o’ tea but not sure the logic plays out here. Hogan, a Republican, finally secures the Governorship in Md, so let’s nominate the nitwit that tries unsuccessfully to impeach him, and Md is loony? Sometimes you get what you ask for.

‘Cox is not just pro Trump, but as a state delegate, introduced impeachment articles against Hogan. He feels the 2020 election was stolen, is prolife and pro 2nd amendment.”

And you expect your opinion to be respected? Good grief.