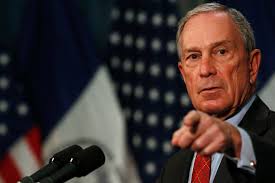 Former Mayor of New York, Michael Bloomberg, is considering an independent run for President. Like Donald Trump, the 73 year old Bloomberg is a billionaire who could finance his own campaign.  Like Trump he is willing to spend up to a billion dollars on a campaign.  Bloomberg has asked his advisers to draw up plans for a possible run. He also intends to do polling after the New Hampshire primary to see if a campaign is viable.

Bloomberg, who changes political parties with some frequency, having been a Democrat, then a Republican, and now an independent, has become increasing alarmed at the present campaign for President. He doesn’t like Hillary’s move to the left, particularly her criticism of Charter Schools which Bloomberg championed in New York. He is also concerned about Clinton’s lack of honesty, and concerns about her email scandals that continue to escalate. (There are many people who think Hillary will be indicted, as well she should be. That would give Bloomberg an opening to launch his campaign.)

Mayor Bloomberg is also bothered by the campaign of Donald Trump and the rise of socialist Bernie Sanders. Bloomberg has set a deadline of March for him to get in the race.  He is waiting to see the results of the early primaries before making a decision to run.

Bloomberg simply is runnng based on his success with certain campaigns he pumped money into from his anti gun supported groups. It is a ego tip for him and hs obsession to do away with guns.

But if Bloomberg runs, he’d be running as an Independent, and that could steal a huge number of votes away from the Republican nominee, Democrats could win if Bloomberg took too many Republican votes.

He is definitely not a fun guy, but he really doesn’t look that odd beside Hillary, Sanders, and Trump. And when Hillary gets indicted, and Biden jumps in …

Mark my word, this is going to be the wildest presidential campaign of our lifetime.

No salt, no trans-fats, no soda, no guns. What fun is that?

He’s not a fun guy. Here’s an journalist who doesn’t think it’s so crazy for Bloomberg to run and how he could win, https://www.washingtonpost.com/news/monkey-cage/wp/2016/01/23/is-it-crazy-for-michael-bloomberg-to-run-for-president-maybe-not/

I can’t imagine him winning, but we live in strange and crazy times. I still think it’s Joe and Liz in the wings to save the day from Clinton when she goes down.