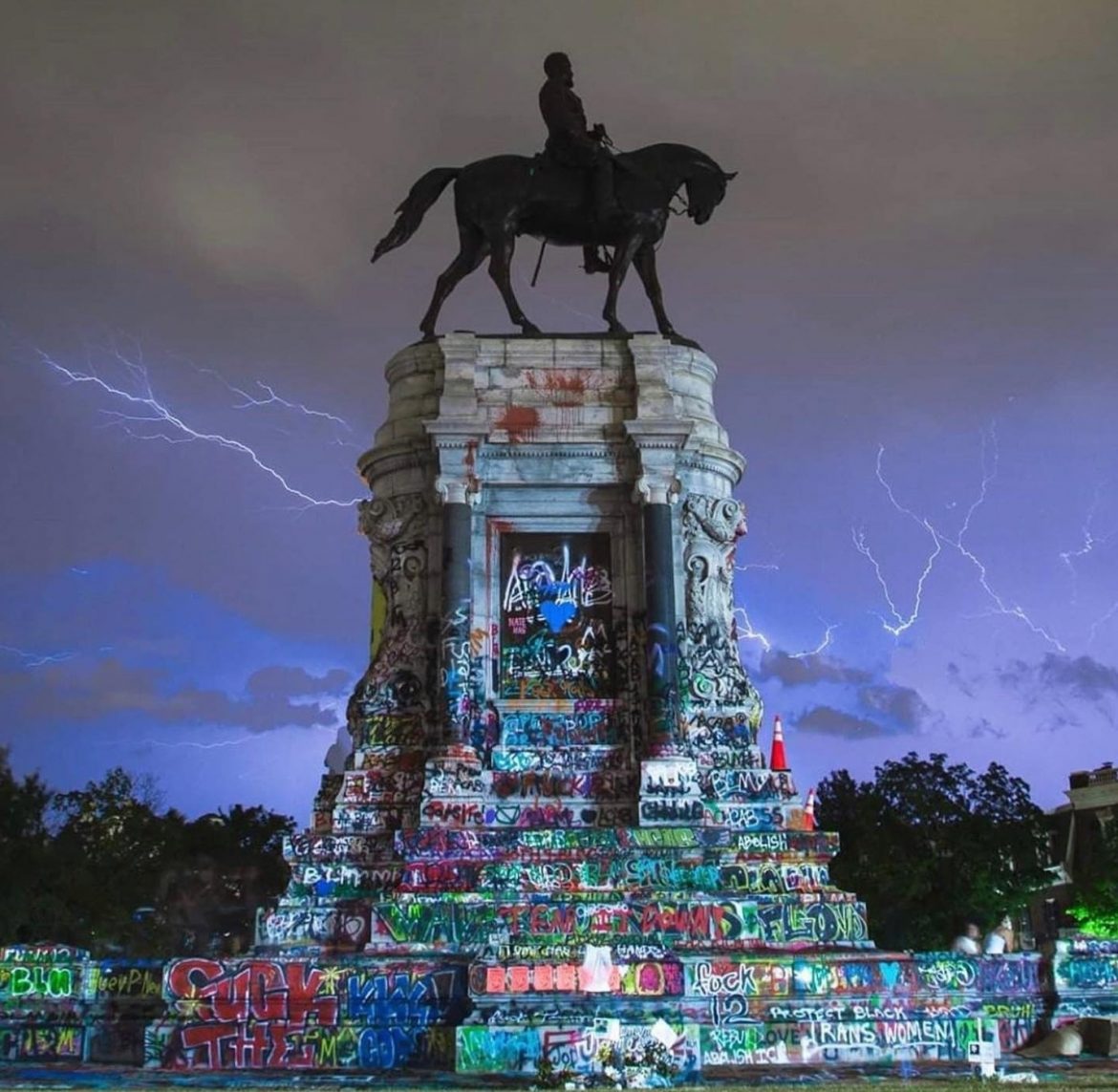 Two elderly residents of Monument Avenue have filed a lawsuit charging that Richmond Mayor Levar Stoney pandered to mob rule by ignoring proper legal procedures to remove Civil War statues and by failing to arrest protesters who assaulted homeowners living near the Lee statue and vandalized their houses.

Stoney justified the taking down of several statues by citing the need to preserve public safety, and he argued that the existence of a local emergency due to the COVID-19 virus gave him the authority to act. â€œThat justification was pretextual and arbitrary,â€ stated the lawsuit, which was filed yesterday. â€œMayor Stoney had encouraged protests and participated in protests during the weeks before the removal of the monuments at issue involving hundreds of people who were not required to observe distancing protocols or wear masks or face coverings.â€

In a reference to Ms. Taylor, the lawsuit states that police officers responded to a call for assistance â€œafter demonstrators assaulted members of the household, destroyed gates, [and] threw objects at a bedroom window of the 96-year-old owner.â€ Refusing to leave their vehicles, police officers stated â€œthey were instructed not to go where they perceived a threat to their safety.â€ Not mentioned explicitly in the lawsuit, protesters also vandalized Masseyâ€™s house by spray-painting graffiti on his front door.

The lawsuit listed other incidents. In one, neither the Police Department nor the Richmond Fire Department responded to a property ownerâ€™s request for assistance â€œwhen violent demonstrators set fire to several of his commercial buildings at Lombardy Street and Broad Street in the City.â€ Also, the lawsuit alluded to â€œrepeated incidentsâ€ in which anti-statue demonstrators â€œblocked streets, vandalized monuments and other properties, both public and private, without being arrested or prosecuted for violations of criminal laws.â€

In November 2017, in the aftermath of the nationally publicized white supremacist rally in Charlottesville which resulted in widespread violence, then-Governor Terry McAuliffe issued an executive order that banned protests at the Lee Monument. The monument was ordered closed from sunset to sunrise. Climbing on the monument was prohibited. All vehicles, firearms and other weapons, tents and tables, bricks and stocks, stick-holding placards, food and beverages, drones, and portable and auxiliary lights were banned.

Neither Stoney nor any applicable state agency has taken action to implement those regulations in the recent disorders, the lawsuit states. Rules prohibiting â€œweapons, tents, tables, food and beverages, and light have been utterly ignored.â€

City Council never appropriated funds for the purpose of removing the statues.

Stoney has asserted the right to remove the monuments pursuant to Resolution No. 2020-R025, adopted by City Council on March 15, to respond to the COVID-19 epidemic. That resolution constitutes City Councilâ€™s â€œpurported consentâ€ to Stoneyâ€™s declaration that a local emergency exists. However, says the lawsuit, â€œRemoving monuments has no rational relationship to the purpose of Resolution No. 2020-R025, which was a measure designed to protect public health from the effects of a virus. â€¦ Removal of the statues would not and did not enhance or protect public safety.â€

â€œMayor Stoney either condoned the violent conduct of mobs that damaged public and private property or failed to take appropriate action to prevent and stop violence in the City at the location of the monuments,â€ said the lawsuit. If there was a â€œpublic safetyâ€ justification for taking down the statues, it was a situation of Stoneyâ€™s own making through his failure to enforce the law. â€œCriminal conduct by those demonstrating on Monument Avenue, including defacing the several monuments with paint, occurred in plain view for weeks during May, June and July 202 without appropriate response by the Richmond Police Department of arresting the perpetrators of vandalism, assaults, and other crimes.â€

The City has an established procedure for removing the statues, which include the holding of public hearings to solicit input from the citizenry. No such public hearings were held. â€œDisregard by the Mayor and members of City Council of the views of the citizens and of the requirements that such viewpoints be received in an orderly manner through the public notice and public hearing processes before decisions are made by elected and appointed officials, as opposed to the violent and threatening actions of mobs, is a violation of the right of citizens at large to participate in their governance.â€

The lawsuit asks the Circuit Court to issue a declaratory judgment that Stoneyâ€™s removal of the statues â€œwas illegal and invalid as being arbitrary and in excess of his lawful authority,â€ declare that City Council has no authority to authorize removal until the public-hearing requirements are complied with, and enjoin the defendants to â€œrestore the monuments to their previous condition before removal and defacement.

Full disclosure: Morgan Massey is paying me to write a history of the Massey family and the A.T. Massey Coal Co.