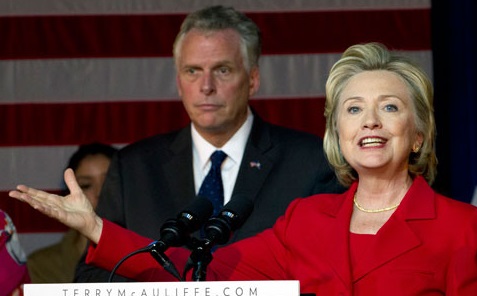 McAuliffe oversaw a whopping total of $1.8 million being spent on staff and consultants in the 14 months after he first took office. His predecessor, Bob McDonnell, spent $464,000 over the same period.

The difference, of course, can partially be explained by the fact the McAulifffe has made no secret about making Hillary Clinton’s success nationwide, and in particular in Virginia, a top priority of his administration. And now that the Clinton campaign has officially launched, we’re seeing that a good deal of McAuliffe’s investment in staff was likely just to keep people employed until they could move over to the Hillary campaign organization.

According to a report in The Washington Post yesterday:

Much of the consulting work went to high-powered Democratic firms that, almost by definition, have ties to the Clintons. They include:

●BlueLabs, whose co-founder, Elan Kriegel, is Clinton’s director of analytics, was paid nearly $88,000 in the summer of 2014.

A handful of individual consultants and staff have left the state party and PAC for high-profile jobs with Clinton, including her campaign manager Robby Mook, Iowa caucus director Michael Halle and spokesman Joshua Schwerin.

The jobs program for future Hillary staffers hasn’t gone unnoticed by state Democrats, according the Post report. None would be willing to go on record speaking out against the Governor or Madame Secretary, of course, but in a year where control of the Senate is state Democrats’ top priority, the apparent incubation of staff for the Hillary camapign has got to have some Democrat leaders furious. This is particularly so given that McAuliffe has been a whole lot of hat and not much cattle when it comes to his supposed fundraising prowess. (He’s only raised about the same amount of money as Bob McDonnell had at this point four years ago).

So good news for Republican senate candidates, right? Not quite, unfortunately. McAuliffe has been directing much of the staff and other expenses toward early development of improved voter data.

[This spending has] been aimed at beefing up data and analytics tools that will help Democrats better identify, register and persuade voters to choose Democratic candidates in 2015, 2016 and beyond, said Brian Zuzenak, executive director of McAuliffe’s Common Good VA PAC. . . .

Making those investments early will arm campaigns with voter ID, registration and other data when it is most valuable, he added.

“Making data investments late is not very helpful,” Zuzenak said. “I think the governor did this in ’13, where they spent good chunks on the front end. . . . It’s not like we’re re-inventing the wheel over here. We’re taking a lot of what worked in the governor’s race and implementing it long-term for Democrats in Virginia.”

This is why it’s key to win the Governor’s race, my friends. It’s not about having a network of employed and experienced staffers that one can then lend to the nominee’s campaign, or about having a high-profile or good reputation when the Governor gets behind his presidential candidate. It’s about raising money and making these kinds of investments in campaign infrastructure in a way that no one other than the state’s chief executive can do.

If–heaven help us–Clinton wins in 2016, that will make the stakes in Virginia’s 2017 gubernatorial election that much higher. And with Virginia being among the handful of states where the presidency is going to be decided, our choice in 2017 will likely have lasting national ramifications.

Reply
Clinton Campaign Manager Silent on McAuliffe FBI Investigation May 31, 2016 at 5:01 am

I’m confused by this article. As I read this there is no contention that Governor McAuliffe has employed any Virginia taxpayer related funds to these efforts other then Democratic PAC monies and State Party fund raising cash, as well as, I assume possibility some of the state’s perfectly legal Income Tax Credit, allowing individuals to allocate 50% of the amount contributed to a local or state candidate for a maximum credit of $25 or $50 if filing jointly. Are you implying there is some PAC violation here?
Is there some other impropriety that I’m not understanding?

As well, why would local Democratic candidates and incumbents be “furious” over these investments in voter “data and analytic tools”, aren’t they going to be the beneficiaries of this technology as well, in future state and district races? If I have these facts correct then what is the issue with $1.8 million being spent on staff and consultants in the past 14 months under Governor McAuliffe vs. the $464,000 spent by former Governor McDonnell, over the same period, other then pointing out McDonnell’s poor performance in party fund raising during his tenure in state office compared to McAuliffe. Was it your point to lay out the facts regarding the funding profiles to demonstrate that the Democratic state party in Virginia has it’s act together and the state Republican party does not?

The only thing outside the “norm” of Democratic election business as usual I see here is the very questionable ethical issue of standing for election in a state governorship primarily as a lever to assist a future specific presidential candidate’s run in that key electoral state. But was anyone really confused about that regarding McAuliffe (the Clinton’s bag man) from day one of his announcement to seek the governorship? What am I missing?