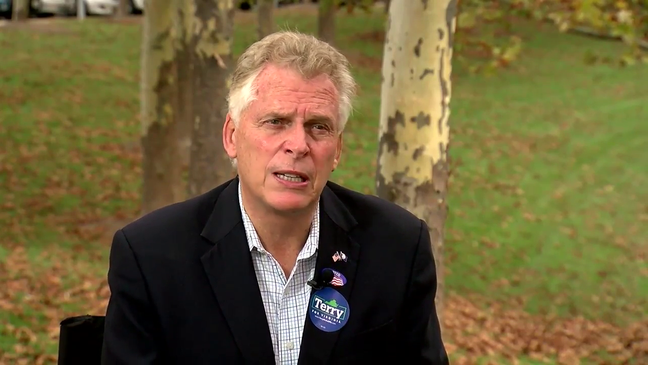 This is what happens when Democrat Terry McAuliffe gets tough questions from the press instead of his customary tongue bath:

This interview was taped last week by an ABC affiliate in Washington, WJLA 7News. The reporter, Nick Minock, interviewed Glenn Youngkin and McAuliffe, giving each candidate 20 minutes. McAuliffe stormed off after just 10 minutes, berating the reporter for not asking better questions as he left.

Not a good look.

Terry’s accustomed to being nuzzled by the lapdogs in the media who even have cute nicknames for him, like The Macker and T-Mac. So when Minock pressed McAuliffe on education the candidate became irritated. Apparently his boneheaded quote from the last debate isn’t doing well with focus groups.

Here it is, the 12 words that are sinking his campaign: “I don’t think parents should be telling schools what they should teach.”

McAuliffe tried to change the subject, lashing out at Youngkin. As Minock began another line of questioning McAuliffe interrupted, stood up and hurled insults at the reporter.

“Well, we did,” Minock retorted.

This is not the demeanor of a man who wants to be governor or who thinks he’s going to win. It’s the slightly unhinged, irrational behavior of an arrogant candidate, indignant he actually has to campaign for office instead of being coronated.

McAuliffe’s nasty side has been on full display lately. On several occasions in the past week he snarled at folks who reminded him of his controversial remarks at the last debate.

“Are you vaccinated? “ he snapped when the subject was broached.

“Put a mask on,” McAuliffe screamed at one guy, who was outdoors.

Clearly, Democrats are used to having their way with the press. When a reporter dares to pose a tough question they shut it down.

Last Friday for instance, Gov. Ralph Northam abruptly ended a press availability when he was asked if he regretted signing HB257, the terrible law that allows school principals to cover up crimes in their schools and no doubt contributed to the cover up of sexual assaults in Loudoun County high schools this year.

In Arlington on Friday Investigative Reporter Scott Taylor also from 7News, attempted to ask Northam if he still thought the law was a great idea after learning that a student allegedly raped one girl and assaulted another in Loudoun. A member of McAuliffe’s media team intervened and put a stop to questions that could hurt the Democratic candidate.

Northam meekly went along with it.

“Governor, I would like to ask you one question. I want to ask you about Loudon County,” asked Scott Taylor.

“I got to get back,” said Governor Northam.

Published at Kerry: Unemployed and Unedited.

“Professional educators decide the curriculim. They are professionals.” That’s EXACTLY the problem. A bunch of liberal educrats decides what our children should be taught and not taught.

I’m sure you are aware that education majors have the lowest SAT scores, for the most part they are not the brightest bulbs although I have known some very smart teachers. The so-called ‘professionals’, those ‘curriculum specialists’ are usually those who were not good teachers and after being shuffled around from school to school, they wind up curriculum specialists because they can’t be fired and there’s nowhere else to put them.

In what county in Virginia are teachers paid 7K less than the national average? And what is the cost of living in that county? NOVA teachers are paid quite well considering they only work 3/4 of the year, even less if you consider all those ‘teacher workdays, 2 weeks off in December, a week in the Spring, and all the school holidays. Teachers are the only profession that constantly whines about their pay.

MS Martin,
I often contemplate why Virginia Teachers complain about their pay (remember they chose the career) and Democrats believe in more pay only to teach theoretical and sexual classes yet our side is demonized for wanting a higher standard of education from what Democrats currently offer.

Terry,
With the divisiveness that politicians and the Media have bestowed upon America combined with the continuing Democrat claim of not enough revenue for public schools do you think that Virginia Public Schools should be foregoing funding courses that contribute to education for careers only to teach mandated theoretical courses?

You know it is hard not to despair of the future…with these idiotic “educators” en masse brainwashing children into their stupid liberal horsecrap… But!!! the Number one song on Itunes is:

then you have viral videos of young people dancing to it..

I’d be a tad pissed, too, if folks kept hammering on something I said and they continually took it out of context

Look at Terry McClinton Rat’s talking points… For the scroungy liberal troll who comes here… Johnny Schmucko Martin… Martin…
First Terry McRat says that parents have No business telling schools what to teach.. Then he claims like you, you turdbird, that Critical Race Theory is not being taught… He forgot the correct talking point to deny that you guys are teaching horsecrap… yeah don’t give me your crap about how it’s now officially critical race… It’s not the Harvard Law School version… but it is left and right bullshit about how blacks are oppressed by whites.. Same difference.
So what is it? You have no business telling schools what to teach or is it they aren’t teaching racial theories about society…

“You have no business telling schools what to teach or is it they aren’t teaching racial theories about society…”
Ir is both. Professional educators decide the curriculim. They are professionals. My wife is a professional and she is extremely competent and invested………….and constantly exhausted. Yes, they take parents’ views into account.

Take your stupid, lying, hysterical CRT bullshit and shove it. My wife teaches first grade. She has kids who are afraid of the dark, who don’t know their alphabet, who are hungry, who are abused. Teachers in higher grades have their own issues.

You should thank God for the skills and caring these professionals (Paid $7000 less per year than the national average despite the relative wealth of Virginia………cheap F-ing bastards) bring to benefit your kids day in and day out.

There is no focus on CRT……….it is a bullshit, gop, pants on fire, shameless lie

The wealth of Virginia is concentrated in an area that feeds off of the National Tax base.
Maybe you should be concerned with all of Virginia if you even are a Virginian.
Also the VEA has plenty of revenue if they can teach theoretical history.

Terry,
Many Virginians approve of taxes being spent on Infrastructure spending and believe it is to build roads, bridges and such for transportation.
Within the Federal Governments Infrastructure Bill is a section that places a hold on new highways and highway expansion. With the Federal Government implementing restrictions and limiting the amount of revenue to Virginia for Highways,
how will you address the needed expansion to Interstate I 81 knowing that this is a major supply route and in some cases the lifeline to Southwest Virginia?
With these restrictions how can Virginia’s economy work for “all” Virginians and won’t it hinder the growth in jobs to this area?

When did you decide to abandon and betray your oath to protect and defend the constitutions of the US and VA? Did you have mental reservations or secret evasions of mind before you swore this oaths upon the Bible? You did use a Bible, right? Answer the question dumbass.

Terry,
On many occasions you have said the key to lifting folks out of poverty is to become educated through our Community Colleges.
In the current Democrat spending bill they are going to scrap Free Community College yet are going to extend the $300.00 Per Child Tax Credit for one year.
Is this $300.00 Tax credit a good trade off for an education that would lift all boats of those who desire to make a better life for themselves?

On Election Integrity;
Fairfax County requested that the signature verification requirement be removed. In a County that carries much of the electorate within Virginia how can this request be a move that fosters integrity within Virginia’s Elections?

Terry,
While during the 2016 Presidential Campaign you said;
“If he got in my space like that he’d be picking himself up off the floor” With that comment, the comments of Democrat Maxine Waters folks cannot believe anything less than Politicians have moved towards be decisive themselves.
No one wants a nasty Governor.
What would you personally do towards uniting Virginians?

McAuliffe has sounded like this for the past couple of weeks. He is sounding more shrill as the days go by as the election slips away from him.

McAuliffe never got the majority of votes in Virginia because nobody likes him. And he never will get them either. Youngkin victory in November!

In your Campaign/Fundraising E-Mails you have a constant theme;
Donald Trump.
Well Donald Trump is not running for Governor of Virginia but being that you run your Campaign in this manner what do you think about President Biden’s handling of our bottled up supply chain?
About the the uncoordinated abrupt departure in Afghanistan?
How would you handle the immigration crisis at our Southern Border?
What are Ralph Northam and Mark Herring doing to see that these folks are not becoming a financial burden to Virginia?
Why do you think College Students across America are displeased with Joe Biden?

Are you in favor of a socialist America?