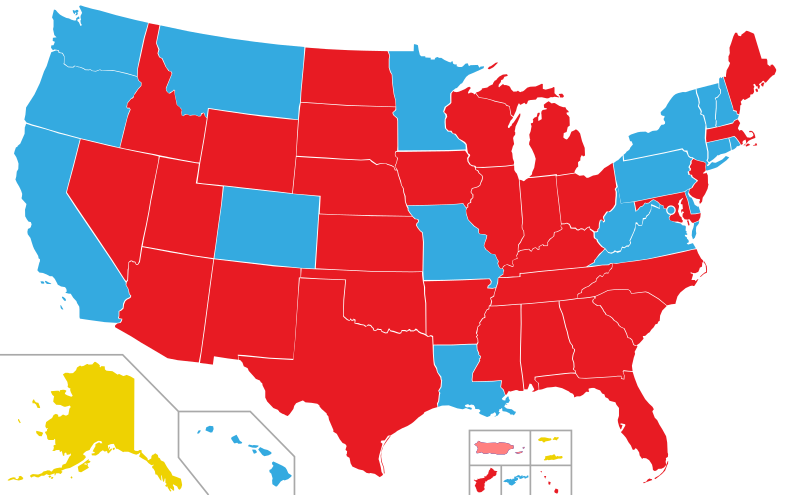 Governor McAuliffe has had high approval numbers but they have declined since he began campaigning for Hillary.  His approval rating has dropped from 58% to 53% and his disapproval ratings have increased from 24% to 29%.  McAuliffe ranks 15th in approval/disapproval percentages.

In North Carolina Governor Pat McCrory (R) has lost 4% in approval, down from 50% to 46%, while he gained 6% in disapproval, 38% to 44%.  It’s likely the ‘bathroom bill’ in North Carolina is affecting his numbers. The left is desperate to have men in girls bathrooms and locker rooms and Governor McCrory is in opposition.

See the list of all Governors and their approval/disapproval numbers here.

Most (and Least) Popular Governors–McAuliffe Drops as he Campaigns for Hillary was last modified: September 20th, 2016 by Jeanine Martin

Maryland Now the Bluest of Blue States, Alabama the Redest of the Red States – The Bull Elephant September 23, 2016 at 6:20 pm

[…] Some of us political junkies check daily Nate Silver’s predictions over at fivethirtyeight.com.  In Maryland Silver gives Clinton a 99.8% chance of winning with Trump have 0.1% chance of a win (don’t know who gets the other .1%).  That makes Maryland the bluest state in the nation, even DC isn’t as blue.  In the District Hillary has a 99.6% chance of winning and Trump stands at .4%.  One has to wonder how a Republican was elected Governor of Maryland!  And he has the second highest approval rating in the US!  […]

It helps that our Governor has a Republican General Assembly that does not let him do hardly anything he wants to do. If the Governor was able to govern the way he wanted to govern, I doubt he would be so popular.

Is 15th a typo? I’m looking at it and he appears to be 25th. Even at 25th, I can’t believe Governor 47 Proof ranks that highly. You’d have to go back and find one of those staunch Democrat segregationist governors to find one worse.

Count from the bottom up. The most popular Governors are on the bottom.

I looked at it differently. I sorted by approval percentage from top to bottom. There, he came in 25th. If he came in 49th, he came in too high.

The chart should have done that way.