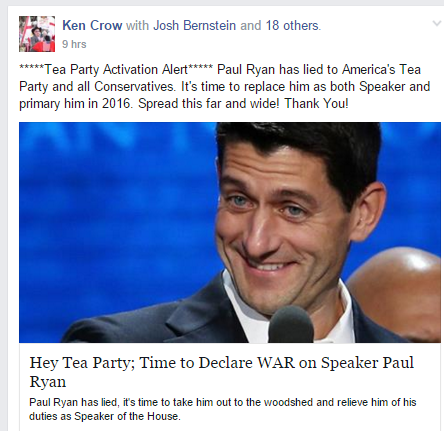 Move to Primary Paul Ryan gains steam as the Wisconsin Tea Party declares war. Â In 2013Â Paul Ryan wrote a bill that would have given 11 million illegal immigrants citizenship. Â In October Harry Reid threw his support to Ryan for Speaker of the House. Â Now Ryan has pushed through an omnibus bill that Rush has asked his audience to tell him how the bill could possibly be worse.Â  Is it any wonder there’s a movement to primary Paul Ryan out of Congress?Â  (Many in Virginia would like to do the same to Scott Rigell (VA2) and Barbara Comstock (VA10) both of whom voted for the terrible omnibus bill.) Â More here and here.Â

I agree he should face a primary, and lose it. However, this will be a massive uphill battle. Ryan has become the new Establishment hope, and they will fight tooth, nail, and chainsaw to help him hold onto his seat.

His challenger will need to A. Be someone known to the people of the district. B. Well funded. With Ryan’s national flub with this bill, that shouldn’t be a problem. C. Supported by a platinum grade campaign team, not a bunch of overpaid consultants. D. Have some political experience. Too many Conservative challengers have failed because they don’t know how to talk the talk and play the game.

Get somebody like that, you’ve got a chance. Without all of the above, no chance.

I don’t consider the mere presence of an “R” to be the sole criteria to consider a given politician a friendly. As for chances of election, I believe I heard similar talk when Eric Cantor was being primaried. I don’t understand how someone can simply blow off Mrs. Comstock’s action here and suggest we should all just be fine with it. Do that if you like but I don’t appreciate being told that someone’s going to stand against the Democrat agenda and then have them deliver that agenda wrapped up in a bow.

Ric, you have to know the district and know the players — all districts are not alike and the Brat district and the Comstock district are nothing alike.

Nobody says blow off her action, however “primarying” her might feel nice to say, but is a futile gesture at best and would serve to strengthen and embolden her.

If circumstances are that bad, she can’t be removed, could she be censored? Get the local party leaders and members who are dissatisfied to signal their discontent with a unanimous letter or a vote to symbolically rebuke her?

Thought about that — what is gained? She’s gotta know what a bad calculation that was. What happens to any unit that proclaims such? Besides, we have such weasel leaders, are they going to allow something that might ‘offend’ her? Symbolic gestures don’t really affect those with the juice who do not care.

If you can steadily gain control over the ground game of the party, the unit leaders and such, a gesture like would do a lot. A handful of people saying you’re doing a bad job is annoying, a large number of the people you’re counting on to get you reelected saying you’re doing badly is something else.

It sounds to me like the problem is at the county level, like those people need to be replaced before Comstock can be dealt with.

If you can scuttle her ground team, you could censor her enough so that she falls into being an acceptable Congresswoman, if not a good one.

Of course, you’d have to have the Conservatives entrenched. Politicians seem to find it easier to try and remove the people opposing them rather than change their own behavior.

Agree with you Rollin. It makes no sense to even challenge Comstock who has the organization and fundraising mechanisms in place. It would be a waste of campaign funds and time when the focus should be on the presidential election.

Don’t worry about that, Barbara has plenty of funding and the democrats have no one who would beat any Republican we run.

No, the democrats would probably beat almost everyone we could run if not Barbara.

What evidence do you have that the “democrats have no one who would beat any Republican we run?” What Republican other than Barbara, would have a chance of beating the Democrats in the 10th?

Virginia’s 10th District is an R+2 area according to the Cook Report. That means that Republicans generally have a two point advantage over the Democrats in Congressional voting turnout. So, conceivably, any Republican who can get out his or her own base would have a slightly better than 50-50 shot.

Comstock isn’t going anywhere in a primary. Her campaign account is flush with cash, her organization is healthy, and her robust work ethic is among the strongest in the Commonwealth.

A primary challenge in VA-10 is an utterly pointless endeavor capable only of burning this moderate, DC-area district and delivering it to Democrats.

Reality check: Romney won the district by 1.1% in 2012. Wolf substantially outperformed due to his deep community ties and reputation for bipartisan problem solving. Absent a Republican campaign of pointless self-immolation, Comstock would be expected to fall somewhere between the two, depending largely on the Democratic weight of message dependent upon Bennett’s personal financial expenditure.

In the astronomically unlikely event that a challenger from the right wins the primary, said challenger has zero chance of winning the general. Zero.

Why are some so eager to engage in friendly fire, particularly in a presidential year where our top priority is retaking the White House?

And why would the liberals care to replace her as long as they have a reliable big government “moderate” vote in her? So no, no reason at all to expect her to be anywhere but where and what she is.

Perhaps it’s time to say “shame on us” for working for her election. Many of us will not be making that mistake again.

God, the “Eric Cantor” defense, can’t establishment Republican apologists come up with something more original and at least topical to justify her endless Obama Democratic supporting voting record then this tired old meme. Plus to imply a one term House representative has anything other then ZERO impact on the Republican WH efforts is a massive joke. Also, I grasp you know NOTHING about the base of the 10th District outside of perhaps Fairfax County. Frank Wolf spent the last decade and a half in office far more concerned about the events in Somalia then his district. The strategist that maintains that a Republican voting down the line on the Obama program agenda has a healthy organization even though they function as little more then an adjunct incremental addition to Nancy Pelosi’s caucus has an odd sense of Republicanism indeed. She will survive only as long as the Democrats fail to come up with a popular, viable candidate out of the 10th District, until then or the local 10th base is fed up enough with her floor votes to support a grassroots primary effort we will have locally the choice between two democrats come election day. A win that brings the Republican party and it’s base NOTHING.

Because she votes wrong. Frank Wolf earned his ‘flexibility’ — she has not.