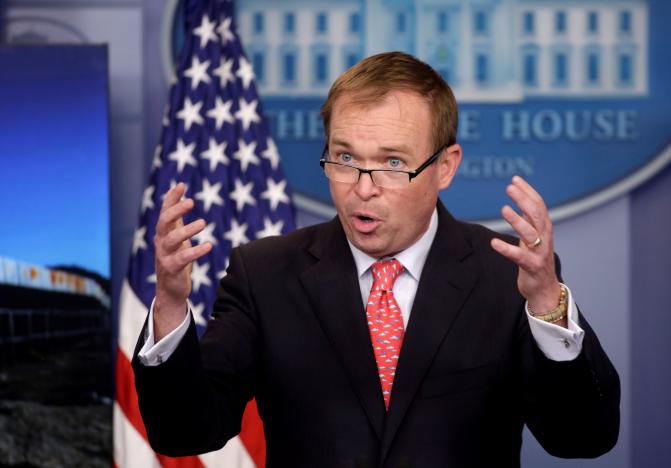 Conservatives â€” and many Trump supporters in the media â€” have been lambasting the new budget as a Wall Street driven cave-in to Democratic demands. They blame House Republican leadership for failing to stand up to Democrats because they are petrified of a government shutdown. Highlights include the following facts: the deal funds Sanctuary Cities, Obamacare, EPA, Planned Parenthood and no money is provided for the wall.

Nationally syndicated radio talk show host Rush Limbaugh excoriated the deal on Monday, concluding, â€œWhy is anybody voting Republican, if this is what happens when we win?â€

Democratic leaders have gleefully claimed total victory over a $1.07 trillion fiscal 2017 spending measure that is expected to hit Trumpâ€™s desk late this week.

Mulvaney, a former U.S. House Rep. from South Carolina, furiously pushed back on the narrative that the Democrats won the budget battle.

President Trumpâ€™s budget director emphasized that, â€œDemocrats on the Hill know whatâ€™s in this bill, and they donâ€™t like it.â€

Mulvaney outlined what he saw as several key â€œwinsâ€ for Trump in the new budget, including: an additional $21 billion for defense, an additional $1.52 billion for border security â€” â€œthe largest increase in ten yearsâ€â€“ school choice for D.C. students,Â defunding of Planned Parenthood in health care funding and extended health coverage for coal minors.

Mulvaney also outlined what Democrats wanted but did not get: â€œNo Obamacare bailout and no Puerto Rico bailoutâ€ â€” but Puerto Rico will receive a $295 million cash infusion via a previous measure.

â€œThe Democrats wanted a shutdown,â€ Mulvaney asserted. â€œThey wanted to forward the narrative that we canâ€™t govern. We averted that and changed their planned political narrative.â€

Some conservative media have tagged the budget as a complete GOP rollover. Mulvaney attempted to thwart that account as fiction, or fake news.

TRUMP: NOT A HAPPY CAMPERÂ

But President Donald Trump on Tuesday, who listens to conservative media that reflects his base, evidently heard a different message from his faithful.

In a series of tweets this morning, POTUS called for an end to Senate legislative filibusters. Trump wants bills passed with a simple majority â€”Â while potentially calling for a government shutdown in September to force Senate Majority leader Mitch McConnellâ€™s hand on the 60-vote cloture rule.

â€œThe reason for the plan negotiated between the Republicans and Democrats is that we need 60 votes in the Senate, which are not there!â€ Trump tweeted. â€œWeâ€¦ either elect more Republican Senators in 2018 or change the rules now to 51%. Our country needs a good â€˜shutdownâ€™ in September to fix (the) mess!â€

I’m sixty-eight years old now. All I have seen in my life time is America rotting away. War is constant. We have no real money. The constitutions are long gone. All the old Americans rights gone, substituted for something else. The Security State owns us, or thinks it does. Spies everywhere — in our cars, computers, display screens, telephones. Pretty sad state of affairs? Wouldn’t you say?

Republicans are Democrats more than not. It’s like HÃ¤agen-Dazs. Chocolate, vanilla, strawberry! It’s all still ice cream, and all made with the same bland homogenized ingredients.

The House Budget Director seems to be another run of the mill feckless cuck. The elite never think in terms of constitutions and limited government function. The are all like our former governor McDonald and the General Assembly. They never thought to cut expenditures by getting rid constitutionally illegal programs, regulations and administrative law, subsidies, illegal commissions and agencies, and the like. No! We had to have the Transportation Tax Bill instead — the biggest tax increase up to that time. My point is that House Budget Direct, delegates, senators, governors, etc., they all come from the same cookey cutter. They are bought into the System. They are bought by the system. They will never change. The only hope for the people is to displace them, to push them to the side. But are the people up to this?

At this point, I catch myself thinking that maybe the fragmentation to
America into three or four pieces, three or four separate countries
might be the only solution. Think about it. The only way Leningrad became St. Petersburg
again was for the Soviet Union to fail — to completely, irrevocably to fail. It simply was a fact of life that the Commie commissars were never going to reform themselves, and I don’t see our corrupt ruling class as being any exception to the rule. Systemic failure may be our only way out. But it could also be the start of another nightmare.

From Ann Coulter, one of the first to support Trump.
“If this is the budget deal we get when Republicans control the House, the Senate and the presidency, there’s no point in ever voting for a Republican again.
Not only is there no funding for a wall, but — thanks to the deft negotiating skills of House Speaker Paul Ryan — the bill actually prohibits money from being spent on a wall.”

The real shutdown starts in November 2018. GOP Politicians shouldn’t get too used to ‘winning’.