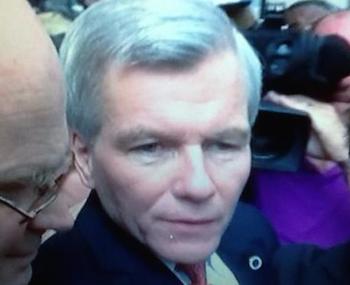 Not good: McDonnell and prosecutors fighting over length of sentencing brief

It’s not a good sign for Bob McDonnell when the prosecutor wants to throw the book at the former Governor not just in terms of getting convictions, but also in how he argues he should be sentenced.[read_more]

As we near the point where Bob McDonnell and his wife are to be sentenced for their September public corruption convictions, the former Governor sought permission from the court to provide a longer brief in support of his arguments for light sentencing than standard rules of the court allow, as reported by the Times-Dispatch:

Lawyers for McDonnell, due to be sentenced on Jan. 6, have filed a motion asking U.S. District Judge James R. Spencer for permission to exceed a 30-page limit on McDonnell’s sentencing memorandum.

“The government will likely ask for a very substantial prison sentence for conduct the defense submits is outside the heartland for public-corruption cases,” wrote McDonnell’s lawyers.

In addition to addressing issues the government is expected to raise, they contend additional pages are needed to address “the entire life of the defendant” and are asking for permission to file a 50-page memorandum on Dec. 23 when all the parties are required to file their positions on sentencing.

But the prosecutors are having none of it.

“Mr. McDonnell stands before this Court convicted of 11 felonies. he should be afforded no greater or lesser consideration from this court than any other defendants. As such, his motion that the court set aside the page limitations… for every other criminal defendant should be denied,” they wrote.

Among other things, prosecutors also argue that more than 30 pages of briefing by his lawyers is unnecessary.

“Mr. McDonnell testified on direct examination, without objection from the Government, about the vast majority of his life, including his: parents’ background, times at high school, ROTC scholarship to Notre Dame, military experience, law school experience, prosecutorial experience, experience as a private practice attorney, his children and siblings, his General Assembly experience, his campaigns for Virginia attorney general and governor, his professional accomplishments as an elected official and his relationship with his wife,” wrote prosecutors.

Yikes. It appears the McDonnells’ lawyers are right to suspect that the prosecution will seek a very tough sentence here if they are dug in so hard against even allowing them a few extra pages of briefing. Reporting at the time of their conviction suggested maximum sentence could be as much as 30 years in prison. Some analysts are predicting a sentence of between 5 and 11 years based on current federal sentencing guidelines.

But if recent history is a guide, those estimates might be a little low. Former Delegate Phil Hamilton was sentenced to over 9 years in 2011 for his conviction on 2 federal felony corruption counts (one count of bribery, the other extortion). Bob McDonnell was convicted on 11 felony counts, and Maureen on 9.

Not good: McDonnell and prosecutors fighting over length of sentencing brief was last modified: December 9th, 2014 by Chad Ochocinco

Its very sad indeed, but I am still keeping my picture of him and I framed and in my office–it was taken long before the tax increase and anyone thought about this wackiness or at least when it was known or likely got out of hand. Thought that picture would be of our VP or President one day, but C’est la vie.

Sometimes there comes a time in an argument when the least said, the better.

In this case, the McDs would be well served by reserving their comments for their appeals.

A pretty hardline position to take. In 25 years of practicing civil litigation, I don’t know if I’ve ever opposed such a request. In a lot of cases, it’s counterproductive, anyway.

From admittedly a non lawyer perspective if you place the McDonnell’s transgressions and their felony count convictions and compare it to the truly egregious acts of former Illinois Governor Rod Blagojevich with his 2011 conviction of corruption and “outright” soliciting of bribes for political appointments, including the 2008 vacant U.S. Senate seat of then-President-Elect Barack Obama, for which he was sentenced to 14 years in federal prison. Anything even REMOTELY approaching this level of sentencing should raise some serious questions of the application of punitive judgment measures in my mind. I believe there is no parole in the Federal Prison System, and so under federal rules the McDonnell’s will typically have to serve at least 85% of any mandated sentence until they would be eligible for early release based on good behavior. So even at the LOW end of the guideline scale, a five year sentence, would still result in over four years of incarceration. A very stiff price to pay for the former governor and his wife.

What is the progress being made by the SEC looking into Terry McAuliffs involvement in the Green Tech Auto EB-5 Visa fraud investigation?

It’s all so sad for his family, and the Commonwealth.

even worse for the families of VA who truly pay for their indiscretions.

McDonnell’s counsel did not get their chance to present their complete “don’t convict the man because he is such a wonderful human being” non-defense at trial. Now they want to explain how wonderful he is in writing, and gosh darn it, 30 pages just isn’t enough.