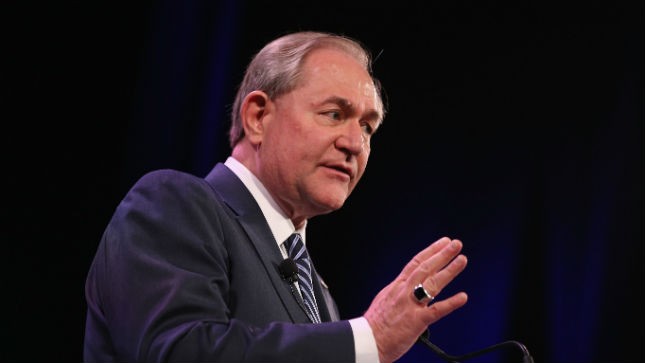 Only Pataki Fails to Make the Virginia Ballot

Only Pataki fails to make the Virginia primary ballot. Â All of the Presidential candidates, including former Governor Jim Gilmore, will be on the Virginia Republican ballot with one exception, George Pataki. Â That means Republicans will have 13 candidates to chose from on the Virginia ballot. Democrats will have 3 choices, Clinton, O’Malley or Sanders. More details here andÂ here.Â

Only Pataki Fails to Make the Virginia Ballot was last modified: December 11th, 2015 by Jeanine Martin

Good to hear it. One full-spectrum conservative (Cruz), a handful of good men that are not ready (Carson, Paul, Santorum), a dozens RINOs, and one reality TV clown. It should be fun.

You left off a savvy, sharp, successful business man who loves this country, and is not afraid to speak the truth. Trump is not #1 in the polls for nothing!

” … and one reality TV clown.” See, I didn’t leave squirrel-brain out of the list.

Trump is going to need the additional military / governmental experience and wisdom that can only be delivered by the constitutionally-eligible Virginian Favorite Son Jim Gilmore!

HAHAHAHA. Sure, squirrel-brained progressive Hillary-donor 2016! Because destroying the Constitution is cool as long as you are a Republican this year.

Trump picking Gilmore for his running mate would be just like Reagan picking Bush to balance the ticket!

Except that Trump is a leftist nut with no clue about anything other than that his own ego.
I keep forgetting Gilmore is even alive. What did he do that was of relevance?

And yet I still pay car tax. Talker -yes.

Things were worse before Gilmore.

Oh don’t be such a tool with the invective and false logic. Adjudicated where and how? Legal credibility? What an oxymaroon!

“… at all agrees that you are a natural born citizen if you have birth a citizenship at birth, no matter where you are born.”

I am sure you are a widely respected legal scholar, but how about you show someone else who is that insists that you can only be a natural born citizen if born in the US?

Well Mr. Keating, polling the room for your position aside, we could look at the Constitution ourselves —

The clause above, like the ones for Rep and Senator spell out in a particular way — they do it in an exclusionary fashion — nobody except for those that meet these things. You may read whatever history you prefer, and if you come out of it thinking guns are only for a government militia, you will still be talking out of your head.

But, the above paragraph, in regard to ‘birtheristic birthirists’ says that you have to be a NBC, or a US Citizen at the time of this signing (because extremely few of them would be NBC at the time) — NBC or US Citizen (at that time) were the choices for president. But time passes, there are even fewer US Citizens at the time of the signing in any shape to run for President.

Now, being a Nag of little brain, I’m seeing NBC as being different from just US Citizen (as in the differing requirements for Rep & Sen) almost like they put it in different for President on purpose, for a reason.

Kinda like they didn’t want any ambiguity for the Guy occupying the Oval Office. They wanted to make sure that he didn’t have stronger ties to something other than the United States — they didn’t want him to pine for the old country, or consider Mom’s seaside Parisian village, or Dad’s wild rides south of the border when acting in the best interests of these United States.

You don’t have to imagine much more than the apparent loyalties of our Nobel Prize-winning, Islam-defending, global-worldly Occupier-in-Chief to see what can happen when you put in someone who has perhaps just a smidge of potentially divided loyalties.

Obama and Cruz were both citizens at birth, not naturalized. The Constitution is not clear on the point, but the legal community all agrees that citizen at birth means natural born citizen. Remember that this came up with McCain being born on a US base in a foreign country?

Ok, first of all you have to get the answers yourself and avoid being played or manipulated with false info. Second you have to understand the terms and how to use them.

According to the land of their birth qualification.

Ted Cruz might have been able to be a Cuban Citizen because of his Dad’s Citizenship at the time. (If Dad still had it)

Marco Rubio might have been able to be a Cuban Citizen because of his Mom & Dad’s citizenship. (If Mom and Dad weren’t refugees and probably no longer had Cuban Citizenship)

John McCain might have been able to be a Columbian citizen. (Had they not been so pissy about us stealing Panama)

John McCain became a US Citizen because his Mom and Dad were US Citizens.

According to their inherited citizenship qualification.

So here’s a way to look at it, they ‘became’ US citizens — not ‘natural born citizens.’ — no becoming or anything if Ma-US C, Pa-US C, and born in a state.

Oh, and a ‘military base in Panama’ is just plain crap — McCain DID release his Birth Certificate, see for yourself.

Bonus points if you look up McCaskill resolution and attempted amendments.